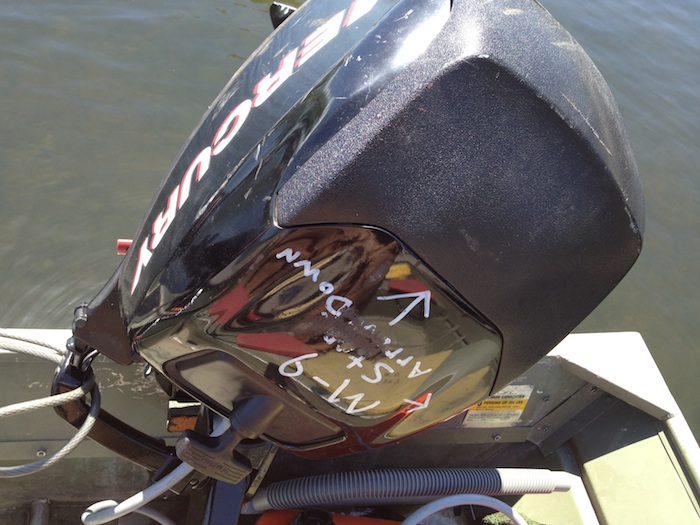 This Rigger Trick came to our attention, appropriately enough, from a guy who works on outboards all the time, and it's both good and simple. If you don't want to lose your outboards to the sticky--and very strong--fingers of engine thieves, try this trick:

Make your engines look NOT new.

That's right: making an outboard, however new, look old and scuffed up might actually work better than any amount of chain or engine locks--though we recommend those, too.

The good folks at Martin Marine, near Oak Ridge, TN, shared this trick years back with a rigger who had to acquire a bunch on engines in hurry at the start of a spring break trip, after the brand new ones were lifted off the trailer the first night of the trip.

When the experts at the marine shop heard they were new engines, they pointed out that this was exactly why they were stolen, and why the thieves went to great pains to cut the chains that had been securing them. The outboards, these guys pointed out, are worth far more if they can be resold, so the newer they look, the more desirable they are to the bad guys.

The guys at Martin Marine said that, had the engines been older--scratched and scarred--or marked with the colors of the school, they probably would have been left alone. These guys are the experts, after all, and noted that even distressing the engines by spraying any random color of paint onto the covers would discourage theft. To make it a good hack, we'd argue that any besmirching you do needn't be messy: adding your school's logo, or painting it sharply with your colors--any kind of "personalization" that is not easily removed--will make the engines worth far less, if not worthless all together.

Of course, if you like to sell re-sell your engines, this hack might not work for you, but if your program hangs onto engines for a long time, this might help you keep them a bit longer--and you could always hunt down an older, more banged up engine cover to use daily, saving the new one for the resale. If clean, looking-new engines mean a lot to you, try leaving the new ones at home, where (hopefully) they are more secure, and take the oldest engines you have when you travel…because just about any measure you take to keep the engines un-stolen beats taking an expensive trip to the local marine engine shop when you are far from home.

Remember though, keeping outboards scuffed up, painted over, or even just hidden under a beat-up engine cover is fine for the outside, but they are no good to you if the insides aren't tuned nicely and well-maintained…but you don't need a Rowing Hack to tell you that, right?

Have any good theft-proofing tricks that you use? Or tips for traveling with outboards? Share your tips--and hacks--in the comments below.