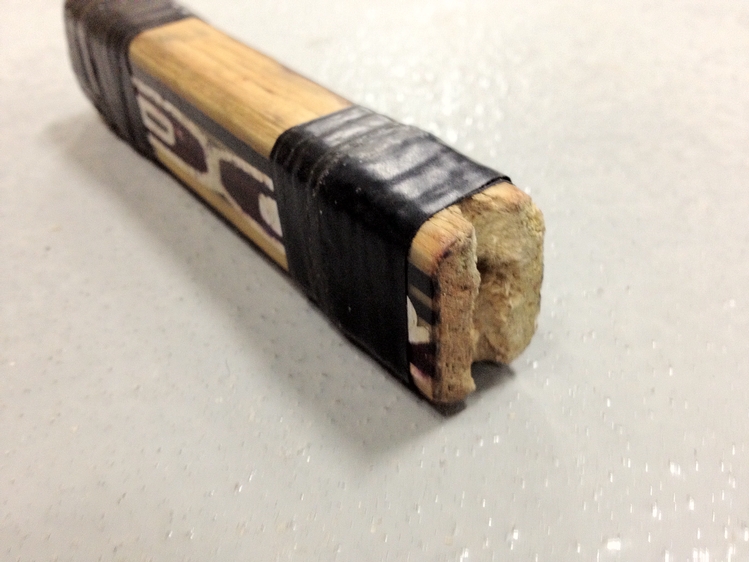 As all rowers know, it is impossible to move eight foot stretchers in any shell without encountering at least one wing nut that was last tightened by a person at least twice a strong as the person sitting there now . . . and so the call goes back to the coxswain--and sometimes all the way to the launch--for a "tool."

This handy, home-made hack might be the best response we've seen yet to the incessant need for a wing nut tool.

The "wing-nut stick" is made out of the handle of an old hockey stick (more on this below), but any similar sized piece of wood could work, especially pressure-treated wood. In fact, one of the better variations we've seen was just the handle of an old hammer, cut down and given the following "wing-nut-stick" makeover:

A hole is drilled in the center of the end, to accommodate long bolts, and a notch about a quarter of its width is cut across the working end to grab the wings of the nut in question. So all you need is a stick, a saw, and a drill and you can have one of your very own (in fact, you could probably make it without any power tools at all, but where's the fun in that?).

It is simple to make, cheap, it floats--which just about renders those first two virtues moot--and best of all it works really well by providing just the right amount of torque to loosen things up quick.

Why a hockey stick? Well, like all good rowing hacks, this hockey stick version of this tool was made with what was handy and lying around the boathouse--in this case, a lot of old hockey gear that this particular university's team goes through like match sticks in the course of a season. The great thing about the hockey stick approach? Get a long enough stick, and you can hack enough tools for every coxswain in the boathouse to have two.

How do you get those wing nuts loosened? What gets passed up towards the bow at your place when someone asks for a tool? If you've got a great, hacked tool for getting this job done, let us know in the comments.