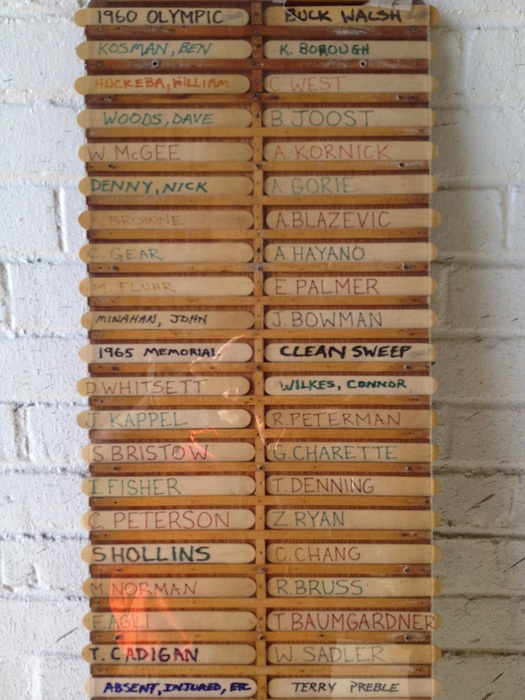 The Stick Board: simple, classic, custom-made.

The line-up stick board may well be the oldest rowing hack, if we don't count that nifty gadget we now call the rolling seat, which started life as, well, a heck of a hack in its own right.

If the stick board is not the oldest hack, then it is certainly one of the most quintessential: custom-made at the boathouse, by the coach or the boatman, not found in stores and never marketed by any rowing company that we have seen. (The height stick would be another quintessential hack, but those escaped the workshop for the marketplace years ago, as anyone lucky enough to have a Bill Leavitt original knows).

Designs for the stick board vary a bit, of course, but the classic stick board is just a board, with groves cut into or built up on its face, then covered--in truly high-end models--by a sheet of clear plexiglass. The sticks are just run-of-the-mill tongue depressors (or tongue blades): you write on them the names of your rowers, coxswains, boats, and even which set of oars the crew should take--and then arrange and rearrange them to your rowing-coach-heart's content.

Lots of places color-code the names on the sticks: red for ports, green for starboards, with folks who can row both sides getting--fittingly enough--their name on both sides of the stick. We've seen these sticks used for attendance (push your stick in so we know you've arrived), for "you-pick-'em" lineups (sticks are easily drawn out of a hat, or trophy), for incentives (your name stays written in pencil until you meet the frosh erg standard), and for bragging rights (UW's Ham n'Egger winners get a star on their stick for each win, as described in this video, and can get their sticks "retired" after enough wins).

Some rowers actually get--and treasure--their stick after putting in a full four years at their school, and one row2k staffer remembers how the sticks of guys who quit were ceremoniously snapped in half, leading, inevitably, to one or two taped-together sticks over time, as the occasional quitter reconsidered his mistake. This last tactic has even been used on rowers who were late to practice; a highly visible stick snapping in front of the whole team was a pretty powerful display that showing up late was not to be tolerated.

You can find classic stick boards in many old boathouses and at any number of newer programs, especially if the coaches there remember spending four college years watching to see where their stick wound up before each practice. Even at places that have switched to the more "modern" magnet board--which Rowing Hacks will consider in a future installment--still use a lot of the old stick board traditions.

Any clever stick board designs or "stick traditions" that you've seen? Let us know in the comments.