Seven world rowing championship events were contested today, and when it was all over seven different countries had won gold, always a good thing for the sport and for the fans. And there were a lot of fans; almost every square foot of the big spectator field with a sightline to either the racecourse or the jumbotron was occupied with rowers, coaches, parents, teenagers, little kids, locals, hardcore rowing fans, and a very, very large number of Chapeau Trilby Classics with the red, white and blue stripes of France (many of them autographed by members of the French team by late Sunday).

Of course a huge part of the 2015 Worlds was qualification for Rio; here is the full tally of who made it through.

But there were medals to be had as well; here is what happened on the last day of the 2015 World Championships.

Women's Double
Watching the New Zealand women's double burst into the lead in the third 500 on their way to still another small boat win/medal for the Kiwis, and you had to shake your head; they really have these boats wired. 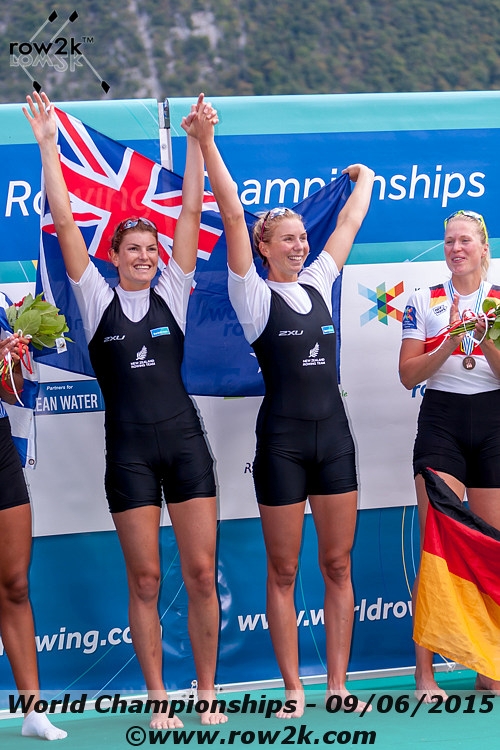 "That was everything we could have dreamed of," bow seat Eve McFarlane said. "we were both saying that we were visualising yesterday exactly how we wanted it to pan out and I think it was just as we imagined."

"We had an amazing season, this race was incredible," stroke Zoe Stevenson said. "We only qualified the boat for Rio, today we wanted to show our coaches that our partnership is a good one."

The Greek women's double included junior rower Sofia Asoumanaki, who just four weeks ago won silver in the junior women's single in Rio, whew. She was rowing with Aikaterini Nikolaidou, who is usually a lightweight rower, but despite their differences there is a solid chemistry in the boat that really showed up today. The crew rowed the double all year save for the one week Asoumanaki was in Rio.

"All year we were training the double, and I had to row only one week in singles, so it was okay," Nikolaidou said. She said the time in the single was not really a hardship or difficult to adjust to.

"The previous year I was the single sculler, and my single is like my home, so it was easy for me," she said.

While in Rio, Asoumanaki sent back pictures of the lake and venue, so Nikolaidou feels already familiar with the racecourse - "So we are ready for next year already!" she said.

Quick quotes:
Aikaterini Nikolaidou - GRE - silver: "We hoped to have a medal after the results of the semis. The magic that makes us .. it is a junior and a former lightweight rower row fast together."

Mareike Adams (s) - GER - bronze: "It's incredible, in the first half we wanted to stay in front of the Lithuanians to have a good result. It's my first time on the podium at the senior world champs. I am so proud of us, especially in the double, it is a great performance."

The US women's double placed 11th overall to qualify the boat for the US for Rio; read more here

Men's Double
The Sinkovic brothers from Croatia ran the show again today as they have the past few years, but they were in a bit closer company than last year for sure, thanks especially to the Lithuanian double, who pushed the Croatian double to within about a boat length of their world record despite a gathering headwind on the course. 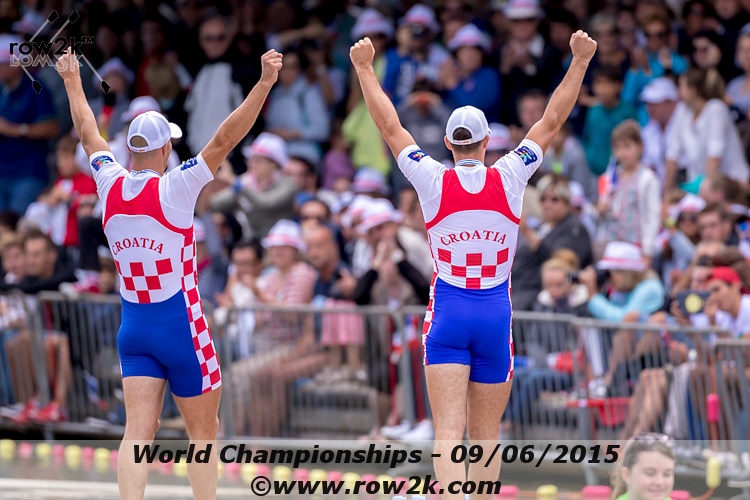 Quick quotes:
Valent Sinkovic (s) - CRO - gold: "The other crews pushed more this year than last year. Next season we will train even more to be ready for the Games."

Saulius Ritter (s) - LTU - silver: "It was the toughest race of the season. After Chungju (universiade) we had six weeks of training, so not a lot of racing together this year. The secret of Lithuania is to fight against each other every training, and we have good coaches."

Robert Manson (b) - NZL - bronze: "It's my first World Championship medal, it is unbelievable. Our goal was to row our best race today, we had no expectations to medal."

The US men's double placed fourth in the C final to finish 16th overall; the US will have to try to qualify this boat next summer.

Light Men's Four
Switzerland qualified multiple crews for Rio at this Worlds, and in the light four came to race with a crew with plenty of Olympic experience, having raced in the same lineup in the A final at the London Olympics. Their experience came through today with a start to finish win that was almost but not quite overshadowed by the crowd roaring for the French crew coming through for a bronze after having rowed in second, then third, and then fourth during the course of the race.

Simon Schuerch (2) - SUI - gold: "We had a good week and a lot of fun here. The step we made from the Rotsee (Lucerne) to here is huge. We tested every combination and the change in line-up brought a lot."

Jens Vilhelmsen (2) - DEN - silver: "It was a tough fight, we had a good feeling before the race, but our technique was not at our best, so it was more of a physical battle. We are satisfied with this silver."

Thibault Colard (3) - FRA - bronze: "It's incredible, so much emotion and strength in the last 500 metres. The public made the difference."

The US light four won the B final to place seventh overall and qualify the boat for Rio; read more here.

Read more about the women's eight in our full report here.

Men's Single
The Synek-Drysdale rivalry continues, and it is a good one that makes for epic races, often abetted by Angel Fournier Rodriguez of Cuba. Today Lithuanian sculler Mindaugas Griskonis put himself in the picture with a crunching start, and forced everyone to try to catch him. Synek was the first to do so, and posted up an almost full length lead for a bit, and then it was Drysdale's turn to reel someone in, and he had the lead almost to the finish until Synek surged ahead in the last two strokes to win by less than a foot. Griskonis showed that his silver medal from Lucerne was no fluke; he will be a sculler to watch in Rio. 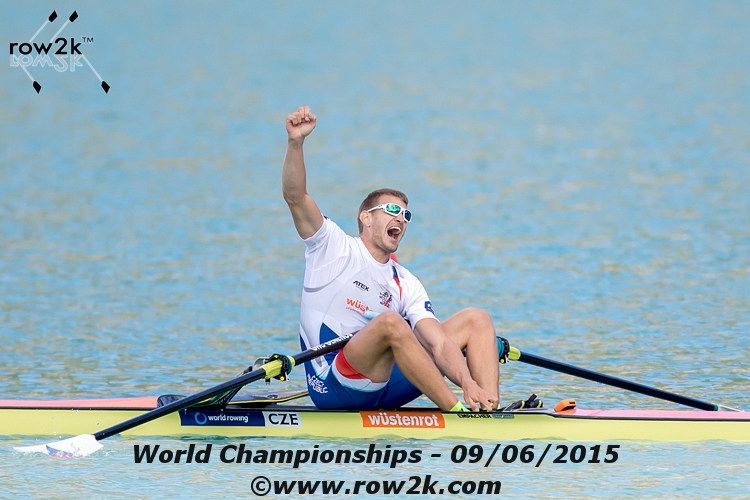 CZE M1x Ondrej Synek nailed it down when it mattered most

We call it a rivalry, but the men are friends as well, to the extent that Synek joined Drysdale and his wife Juliet for pictures with their 11-month old baby, holding the infant himself for photos. When the child reached out to go back to her Dad, Mahe said of Synek "it's okay, he is our friend."

Ondrej Synek - CZE - gold: "My winter wasn't 100% as I had a surgery in February. I focused everything on the World Championships. The last training camp changed everything. After the semi, I knew I needed to row long to be in front. It's all about next year."

Mahe Drysdale - NZL - silver: "It was a tough race, unfortunately I lost the most important of this year, it is a bit disappointing, but obviously next year is the one we all want. I lost because I didn't see Ondrej's move."

Mindaugas Griskonis - LTU - bronze: "I feel very good. It is the best race of my rowing career. This year I am in better shape. I believe in myself and I knew I could be fast."

Ken Jurkowski seemed to be plagued by injury, and he was clearly very disappointed with his D final finish this week. The US can still qualify the boat for the Olympics at the European Qualifier in Lucerne next year.

Women's Single
Kim Crow remains the class of the event, and there was no question about it today as she cruised out to as much as a five or six second lead in the second 1000, such that she wasn't even in the screen in most of the video coverage - all you could see was her boat wake.

The race for the other medals was pretty good, though, and four different scullers were in medal spots at some point, including US sculler Gevvie Stone.

After an interesting week of racing where she seemed to have figured out how to do what sometimes seems like an interminable eight-day regatta (and about which we talked to her a few days ago), Gevvie Stone showed she has truly arrived as a single sculler.

"I approached the race today as though I were playing with house money," she said after the race. "It was about racing my best race and seeing how I stacked up against the best in the world. I went out hard, and I rowed stubbornly the entire 2k. I am happy to say that I put in an effort of which I'm proud. Now, I need to figure out how to row a bit cleaner and a bit more efficiently when I'm at that max effort. I've got a little over eleven months to gain some more speed (knock on wood, I win US trials)."

Kim Crow - AUS - gold: "It feels really special. I had a fun year, I got engaged and to be World Champion makes it really great. Today was about staying calm and executing my race plan."

Mirka Knapkova - CZE - silver: "I am very happy as last year I was in the B-final. I hoped for a medal, but to have it feels great. This year I changed my training and it seems to be successful."

Jingli Duan - CHN - bronze: "It was very close, I wanted to do everything I had to pass the finish line. I am very happy and there is still a lot to improve for next year." 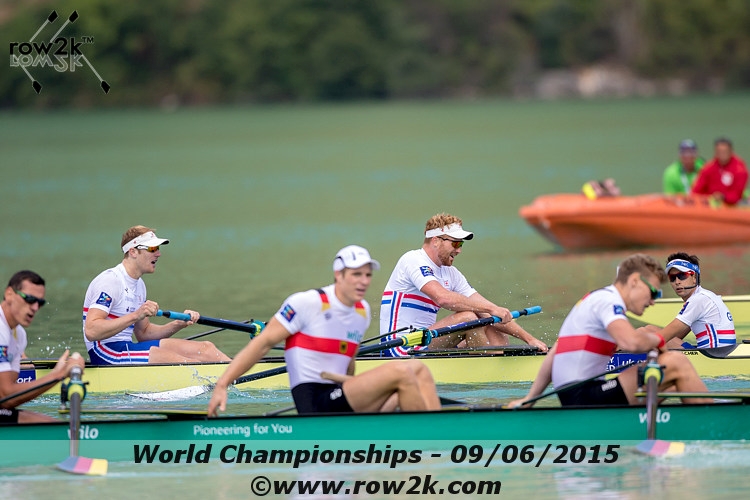 Men's Eight
Great Britain came into the finals today as the putative favorite if in part because Jurgen Grobler had prioritized the eight - and GB hasn't lost a priority event in a long time. The German crew wasn't going to let it go easy, though, and gave horrid chase to the Brits all the way to the finish. They couldn't quite make it past the GB, but they made an impression, and many of the GB rowers were pretty much in a heap when they got to the dock - but they got the gold medal by 0.18 seconds, and by the time the hardware was handed out, they looked like they had enjoyed the whole thing.

Meanwhile the New Zealand Dutch eights were pushing everything from behind the whole way, with the Dutch crew surging at the last instant to get bronze by even less than the previous split at 0.13--Men's eight racing at its finest.

Matthew Gotrel (b)- GBR - gold "We just executed our race plan. It was the best row we've ever had. We had a lot of pressure, but it is the best job I've ever had."

Maximilian Reinelt (3) - GER - silver "We had a good start and a good first thousand. At halfway we tried to go, but we were half a length behind and this was too much. It is ok, but we wanted to win."

Dirk Uittenbogaard (b) - NED - bronze "We just focused on us, at the finish, the cox told us, one man to go, bow ball to go, you're in front. I feel exhausted, empty, but proud."

The US men's eight won the B final to place seventh overall; read more here 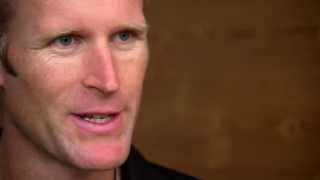