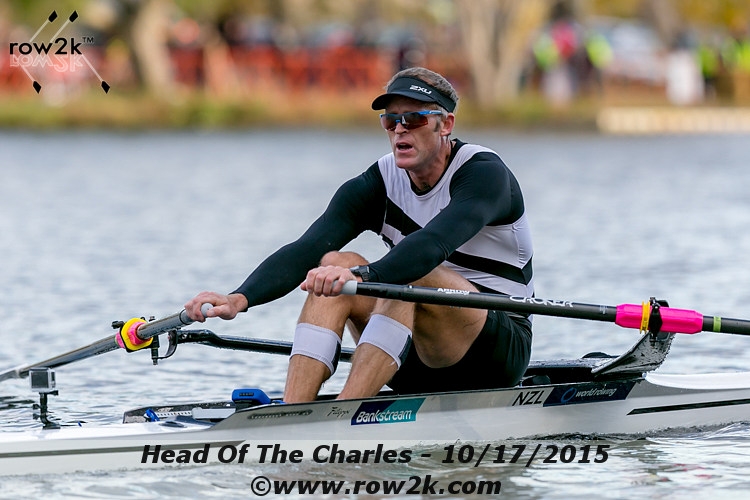 Drysdale getting familiar with the dirty water

The 51st HOCR brought the usual mix of charm, emotion, and speed today, but the Charles itself was a bit mean on the day. A stern headwind, wind shear at the bridges, a messy basin, and cooler temps definitely reminded folks that this is a Fall Classic.

The Head of the Charles remains a regatta of superlatives, and there was a lot of great racing today. We'll run down a few of the best ones here.

With the addition and enhancement of Para-rowing events, which will run tomorrow, the regatta continues to broaden its scope; but even so, the HOCR is really almost an all-comers event (if you can get in, of course).

Who needs the "Great Eights" when you have the Masters Events? Between a full-scale "British Invasion" (see our interview with Matthew Pinsent here) in the 40+/50+ events, and a true overload of Olympians and ex-National teamers in the big boats, there was no shortage of big guns on the course today. The Molesey Boat Club showed up to the Head of the Charles to some serious purpose today, winning the Men's and Women's 40+ Masters Eights, the Men's 50+ Eight, and the Men's 40+ Four, while the Tyrian Boat Club of the GB took the Men's 50+ Four.

The "Olympian Dividend" was also fully in evidence in the Men's and Women's Alumni Eights, where Northeastern (Men) and Michigan (Women) repeated their wins from 2014, sporting stacked crews all around, whew. This is getting serious!

Cowles and Stitt won the Champ 2x by 0.8 seconds

The closest margin of the day was the 8/10s of a second spread between PBC's Willie Cowles and Sam Stitt and Peter and Tom Graves in the Men's Championship 2x. The Graves actually would have won the event on raw time, but a 5-second penalty nudged them just heartbreakingly behind the PBC duo.

Depending on how you look at it, for the Graves rowing family, today was either a case of "almost enough" or "not quite," with youngest brother John Graves also coming in 2nd this afternoon, in John's case in the Men's Championship Singles, behind Mahe Drysdale.

After a few times down the course now, Drysdale seems to be overcoming the built-in advantage that the locals have, but took care to pour it on in the straightaway Powerhouse stretch today, where he picked up most of his 10-second winning margin. Scary to think about the Olympic champ knowing the Charles really well, whew.

Gevvie Stone left no doubts in the Women's Champ Single, winning the event by 42 seconds. The announcers at the finish line turn paid Stone a compliment (of sorts), noting that Stone would have an advantage over her lightweight competitors in today's headwind, but you also have to take into account that Stone is not all that much bigger than most lightweights. 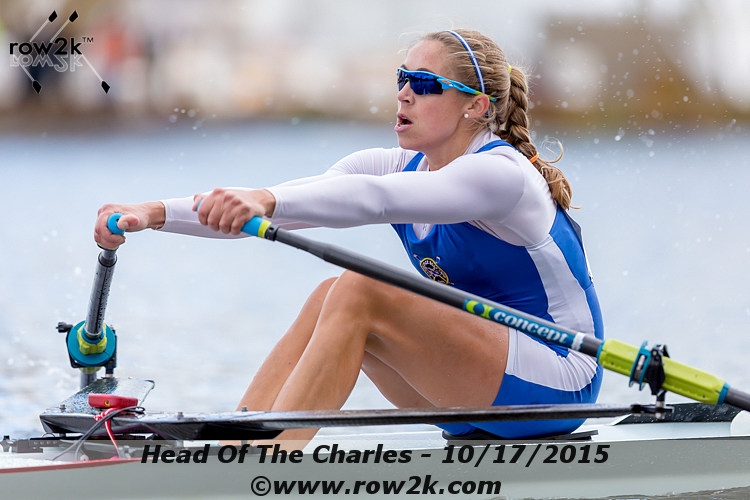 In terms of overall (and we're talking, epic, decades long) efficiency, there probably are not many crews that can do what Dan Gorriarian and Michael Smith seem to do with such ease. Gorriarian and Smith row together just two days a year, once to practice, and once to race the Head of the Charles.

"You know, they say that doubles are born and not made," said Smith. "It just clicked. The first time we rowed together, in 2001, I felt like I was rowing in my single."

Since that first row in 2001, Gorrarian and Smith have won the Charles 11 out of the last 13 years, taking another win today in the Senior Master (50+) Doubles.

Former national teamers and friends C.B. Sands-Bohrer and Linda Muri also repeated their win in the Senior Master (50+) Doubles today, and against the backdrop of Muri's recent battle with cancer, it's not an understatement to say that these were wins of resilience (and friendship) and not merely athletic prowess. We'll post a longer conversation with Linda Muri later this week.

The regatta's oldest and youngest competitors took to the water today, and both rowed in the last event of the day, the parent/child double. Finn Crawford, age 12, represented CRI today, just about alongside Long Beach RA's Earl Johnson, aged 86.

Father and son Schoch rowed as well today; for more on the experience of the Parent/Child double, see our feature on the Father/Son combo of Eduardo and Marco Palomo.

Amongst the older competitors, it seems to be about both longevity and grace. Rivanna's Kit Collins took home his 11th win at the Charles, this time in the Grand Veteran event, at 83 years of age.

"I'm told that if I had a longer stroke, I would look better," Collins mused after the event. "But it does seem to work for me." Collins also acknowledged that the competition amongst the athletes his age is one of mutual respect. "Modesty is very important."

For the innovative rig of the day, the MIT entry in the Men's Alumni Eights takes the prize, braving the windy course in a full "battleship" rig: two port oars in stern pair, middle four all on starboard, and bow pair back on port. The crew didn't look bad at all, to boot. When asked whether this was planned or an engineering experiment, the MIT coaches responded, "it was not an experiment - it was a shameless bid for attention." 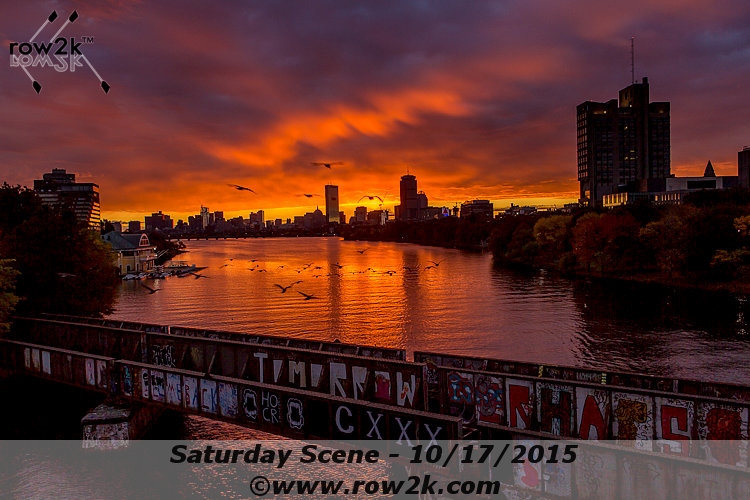 Saturday sunrise
back to top
Head Of The Charles Regatta Features