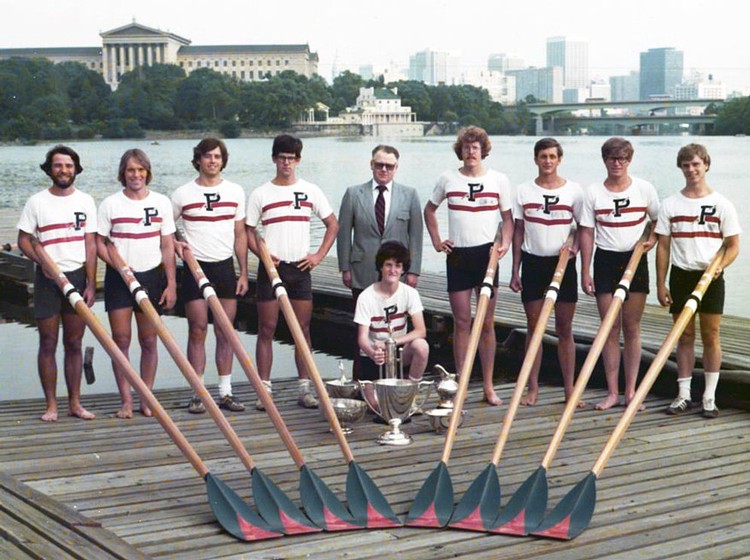 In that stormy May of 1973, I board the team bus to return from Worcester with my third consecutive Eastern Sprints second-place crew, a heavy heart and a firm plan to seek a new coaching opportunity somewhere - anywhere - the farther away the better . . . and the West Coast is as far as I can go before I run out of land.

With the benefit of hindsight, I can report to you that this last effort of mine as Men's Freshman Lightweight Coach for the University of Pennsylvania will bear abundant fruit just three years later. As seniors, five of these 1973 guys of mine will win the Eastern Sprints and go to Henley Royal Regatta!

Here's another one of those "couldn't make this stuff up" happenstances that absolutely fill this book. After their freshman year had finished in a Karlisch in a line squall, two members of the 1973 First Freshman Eight, stroke Ron Hendrickson and bow Pete Holding, chose to leave the family of rowing to focus on their studies, but the family of rowing chose not to let them go. In 2010, Ron's teenage son began a fine career at Moorestown Rowing Club in New Jersey, much to the delight of his proud father.

And Pete also made it to Henley . . . albeit by a circuitous route and many years after his former freshman teammates. 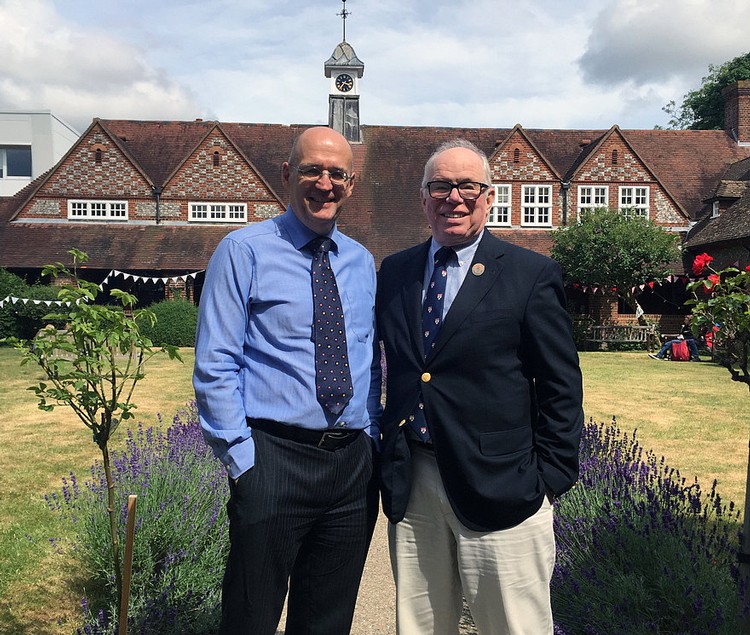 In November of 2017 I was honored to be invited to speak for the third time at the biannual Rowing History Conference at the River & Rowing Museum in Henley, and this time I asked Pete Holding to introduce me. This is how he told our story:

"It really is a privilege and a pleasure for me to have the opportunity to introduce the next speaker. We've been hearing this morning and this afternoon about some circles being closed and connections being reconnected. Before this past Henley, Pete Mallory and I last saw each other forty-four years ago. I was frankly shocked . . . [comedic pause] . . . at how little hair he had left at the time.

"Pete was my first coach. At the time I was an undergraduate, I served in the bow of a very successful freshman lightweight eight at the University of Pennsylvania. We were undefeated throughout the entire year and only lost in the Eastern Sprints as the result of a crab caught with about 200 meters to go by Don Cooper . . . whom I will never forgive.

"But Pete taught me so much, and so many of the things that you have been hearing about this morning about what a good coach can do were exemplified by Pete. Not the Al Ulbrickson style for Peter Mallory. [Al Ulbrickson was the coach of the 1936 University of Washington Crew that was described in the remarkable book, The Boys in the Boat, written by Daniel James Brown, who was also speaking at the 2017 conference.] Pete was well known for his fiery nature. As I jokingly and truly said to him last night, just about the only thing that I can remember him shouting at me over and over again was, 'Holding! You're - and I won't fill in the expletive - late!'

"And I was always late on the catch.

"Peter is perhaps as well placed to be the next speaker as anyone that I can think of. Winning multiple national and international accolades at the highest level fitted him as a highly successful rower and coach in his own right, but since then he has become one of the world's experts on the history of rowing, and indeed I noted as we were coming back [after lunch] that his four-volume tome, The Sport of Rowing, is on sale downstairs, so you might want to grab a copy as you go out. That sort of encyclopedic knowledge makes him well placed to do this next speech.

"He is also a man who is absolutely fanatical about the detail. Peter's other famous tome has the lively title, Optimal Force Application in Rowing, the Analysis of Force Graphs, and Force Graph Biofeedback . . . [another comedic pause] . . . I haven't read it . . .

"But that gives you some flavour of the man, somebody who is absolutely interested in all aspects of the sport. His passion for the sport, his knowledge of the sport, is genuinely world renowned.

"I'd like very briefly in the thirty seconds that remains to me to pay another personal tribute to Pete because his influence turns out to have spread across into this country [of Great Britain]. In my later years I have become a head teacher, and I am proud to be the head teacher of one of the most successful state-funded schools in the country, Sir William Borlase's Grammar School in Marlow [just downstream from Henley]. I think I got the job partly because I'd been a rower, and that was something that they wanted to continue. When I joined, it was a successful rowing program already, with about fifteen to twenty rowers. We now have nearly 200 rowers each year. We are in partnership with Great Marlow School, which of course is Sir Steve Redgrave's [arguably Great Britain's most accomplished rower] own school, and going from strength to strength.

"I think it is genuinely fair to say that Pete's influence will have extended to the fact that there are now 150 state-funded rowers just down the road from here. Three recent Olympians and something like fifty schoolboy and schoolgirl internationals have come through my school in the last twenty years. Pete's inspiration, his understanding of what makes a good rowing program, his genuine passion for the sport and his zealotry for the way the sport can transform lives has been lived out in my own school.

"So thank you for that also, Peter."