That day of the Jayvee Scar in 1967 nearly destroyed me. To be found wanting by my sport of rowing . . . and with no explanation, my life was spinning, I was delirious. Why, just nine months earlier I had transcended ordinary experience. I had touched the divine at the 1966 Royal Canadian Henley Regatta.

In those days, lightweight men had to average 150 pounds at the U.S. Nationals, but in Canada you had your choice: 135, 145 or 155. So in the summer of 1966 Fred splits his squad in two, packing the 155-pound group with all of my Penn Varsity teammates, while I and a bunch of younger guys are chosen to lose an additional ten pounds. I can't quite remember how I pulled off making it all the way to 145, as during the off-season at the age of 21 I was a solid 170 without a lot of body fat. Enough to say that I dwelled in the land of yogurt, raisins and hard-boiled eggs for many eventful weeks.

We arrive in St. Catharines, Ontario, and things start well for us from the beginning. First of all, we're actually here! Remember, in 1965 we had to skip this most fun regatta in our part of the world because somebody had to work, and that probably cost us the U.S. National title that year! Now we find Mack Sennett silent comedies on the television at the Hotel Leonard - no relation to Fred, but a good omen nonetheless - and a slot-car track is just down the street. Plenty to keep our minds off of our stomachs, and we all make weight. Life is good.

In our very first race I stroke our Undine Barge Club 145-pound coxless-four to my first ever national championship, a surprising and unexpected Royal Canadian Henley Gold. We can't seem to get off the start line with anybody, but what the heck, we move from last to first like a hot knife through butter. During the last 500 meters we even have time to ease off a bit for an in-boat discussion about our steering.

Before this summer, I had seen plenty of coxed-fours, but in a coxless-four who steers? Well, one of the rowers has wires from the rudder attached to his footstretcher. Twist his foot and the boat responds. Voila! Pretty slick. This athlete is often referred to as "the toe", and it takes a lot of skill to row AND look around to see where you're going AND twist your foot to use the rudder at just the right moment in the stroke cycle, all at the same time. Coxless-fours are a common sight in Canada and Europe in 1966, but they are rare in America. Undine had to borrow one for the summer to for us practice in back in Philadelphia. On this day, I decide I like coxless-fours a great deal. Yessirree! 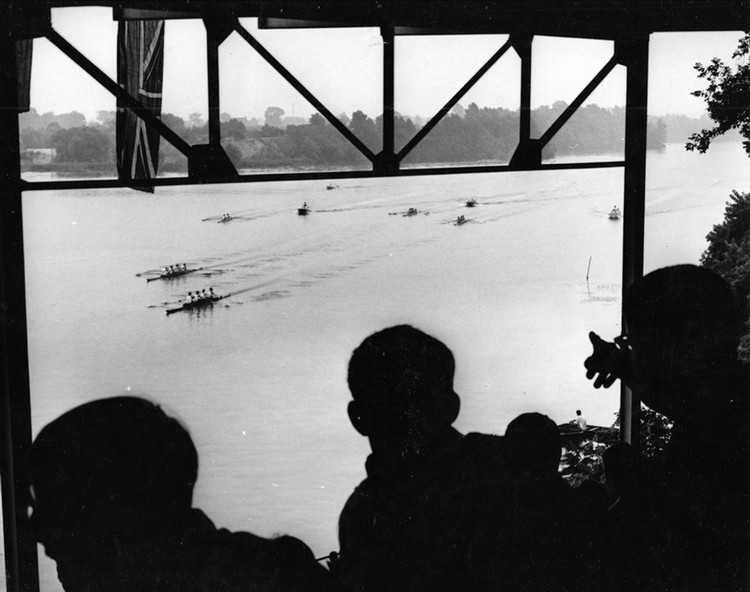 Our second day is to be a much sterner test. The start of the 145-pound coxed-fours race is scheduled exactly forty minutes after the start of the 145-pound eights race . . . and we're entered in both! Now let's see. I got 800 in math on my SATs. It takes a bit more than six minutes just to row the eights race. If we win, and we plan to - after all, we haven't lost yet - if we win, we will have to catch our collective breath and then paddle over to the grandstand for the medal presentation. They hand us our medals in a little basket at the end of a pole. That will take maybe ten minutes. Then we cross the course to the docks where our other shell will be ready and waiting for us. Climb out of our eight and into our coxed-four. Tie in. Another ten minutes. What's that leave? Maybe thirteen minutes to row 2,000 meters back to the start and maneuver into the stake boats before the official begins to poll the lanes for our next race. Hell, we'll have to row back up the course at near race pace just to make it! 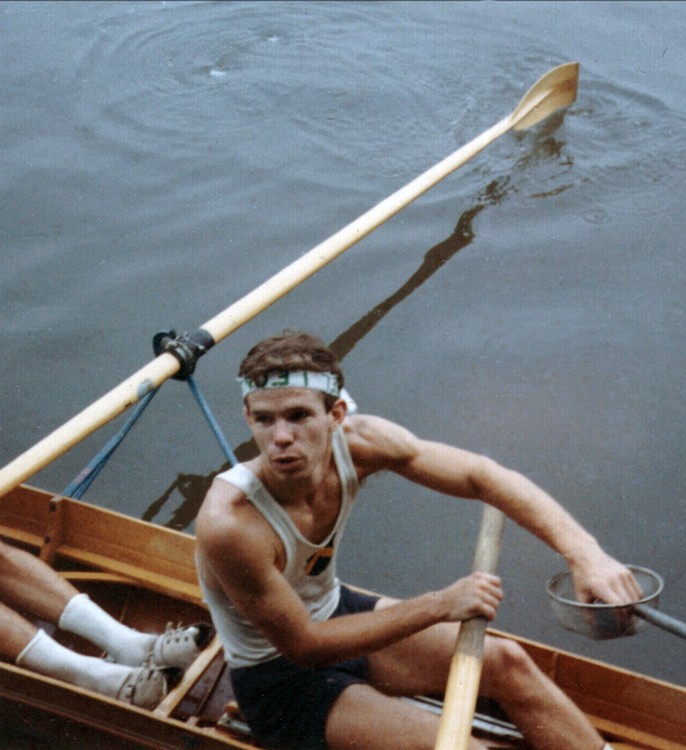 Medals come in a basket!

I was stroke of the University of Pennsylvania Lightweight Varsity this past spring. I stroked our four yesterday, and I will be stroking again today in both our races.

Immediately behind me in the four is Tom Cassel, a sophomore from the Penn Lightweight Jayvee and just coming into his own as a rower. Soft-spoken and wearing glasses, he is a superb athlete, already deceptively strong, and an excellent slot-car driver.

Next comes Geoff Holmes, from the Penn Lightweight Freshmen, blond hair, not very powerful, it seems to me. Don't remember ever having had an actual conversation with him, before or since.

John Hanson, a high school kid from the Haverford School on the Philadelphia Main Line, completes the set in the four's bow-seat. He has gotten a lot of teasing for being so young. We have given him a bawdy version of his last name and used it with such regularity that I have nearly forgotten that he came into the world with a "real" name. Yesterday he was our toe, and he got us over the line in first place.

No chance of a steering problem today, though, because the 1965 buoy-chastened Undine coxswain Saul Berman, also from the Penn Lightweight Jayvee, will be handling the tiller ropes for us. As is usual when he's dieting, Saul shows up crabby. He's almost as tall as any of us, and this year he's lost even more weight than any of the rest of us have . . . except maybe me.

Saul is an odd guy, very serious, curiously distant. We're now roommates back on campus, but I'm an art history major and he's studying accounting. He's chief justice of the university judiciary, I minor in philosophy and fraternities. While the rest of us are having a serious discussion about whether enough time has gone by for a full re-evaluation of the historically underrated contribution of Shemp Howard to the Three Stooges oeuvre, Saul's probably debating within himself the economic impact of the investment tax credit. Oil and water, but still fine friends. The first time I ever tasted horseradish was at Seder in Saul's home.

Not that much had been expected of our eight when we left Philadelphia. The 3, 6, 7, and stroke-oars are the same four guys who won yesterday and who will be racing twice in forty minutes today, but before this weekend, I hardly knew all the names of the other guys. After this weekend, I will still hardly know all their names. If I ever write a book about this someday, I will have to look them up!