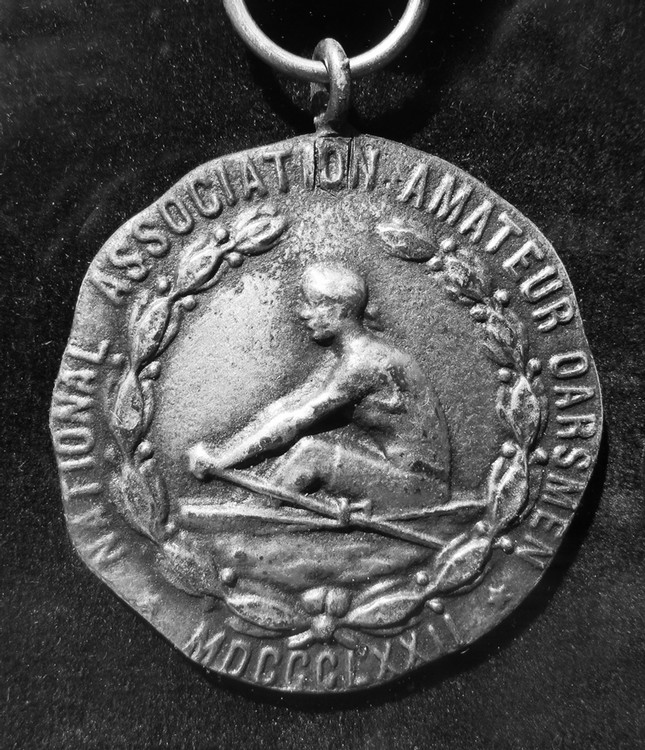 Back to Hunter Island Lagoon, 1965. At 1,000 meters we have at least three lengths. Just as it will again in 1989 on Lake Merritt, my mind is wandering as my senses take everything in. I am very, very pleased with myself. 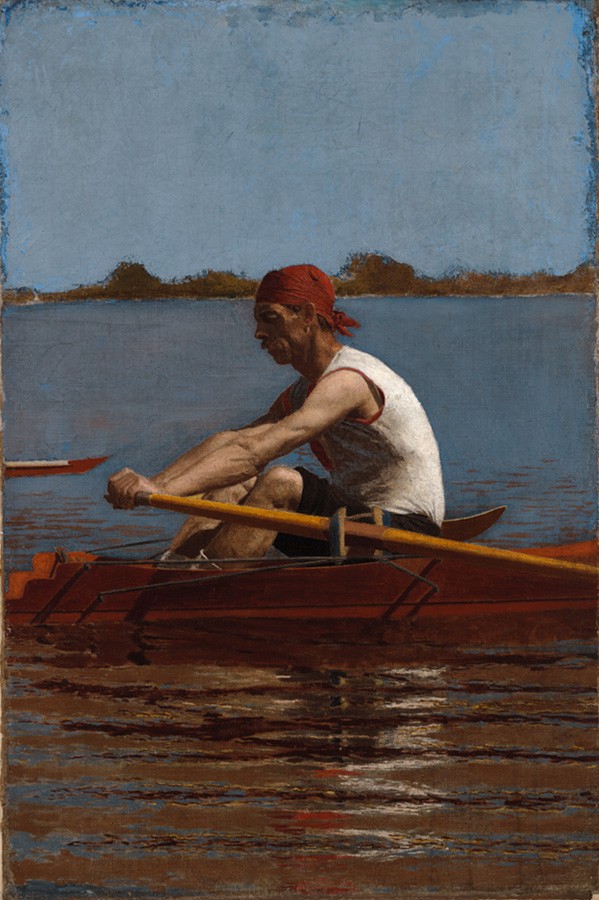 As I survey the course, the flags on the Albano buoys are snapping smartly toward the left. It is mid-afternoon, and there is a pleasant but persistent onshore breeze from Long Island Sound, but I am thinking forward to my Gold Medal. On it is a crude bas-relief rendering of a famous 19th Century professional oarsman named John Biglin, based on a portrait of him in his single shell painted by Thomas Eakins, the world-renowned painter - and a sculler himself - from Philadelphia, Pennsylvania, who knew Biglin well. It is a subject he returned to several times.

Now I feel a great deal of fondness for the works of Thomas Eakins. He's one of my absolute favorite artists, but there's no spontaneity in his rowing paintings, don't you agree? These larger-than-life oarsmen from the dawn of competitive rowing history, these oarsmen who raced their hearts out at 50 strokes per minute appear in Eakins' paintings like insects caught in amber . . . and that's actually what they are. His paintings are meticulously planned and executed, not from life but from clay and stick figures and graph paper in his studio at the Pennsylvania Academy down on North Broad Street. Of this particular composition, a perspective drawing and two watercolors from 1873 and an oil painting from 1874 survive to this day. They may lack any sense of motion, but Eakins has turned John Biglin into a monumental sculptural presence worthy of the Parthenon frieze. (Can you tell I am an art history major back at Penn? Do you want to know how I ended up studying art history when I went to Penn to study architecture? The required freshman architectural drawing class conflicted with crew practice!) 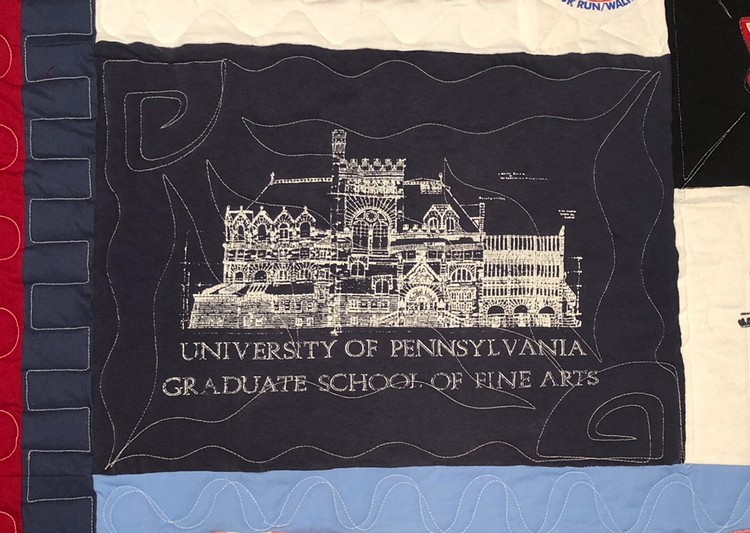 My reverie continues as I float above my shell as it courses down its lane of buoys on Hunter Island Lagoon. I can feel the heft, the texture of the medal in my hand. An alloy of some sort, rather cheap, I suppose, light, coated with a sort-of golden frosting, with a little circular brass ring at the top for the ribbon to be attached. Rather pedestrian for an object of such symbolic and emotional portent! The ribbon is red, white and blue. Of course. What else?

As we continue down the course, I visualize getting the medal framed atop a photo of our boat, our National Champion boat! I carefully select the place I will hang it in my living room. I imagine taking the subway surface car from campus to Center City Philadelphia and walking up Walnut Street to the frame shop on Rittenhouse Square. I select the mat stock, perhaps a creamy parchment color to echo the wood finish of our oars. Ouch! Look at the estimate! $25.50? This is going to be expensive . . . but it's well worth it, don't you think? A souvenir to be treasured for a lifetime.

I remind myself that we will have to pose for that photo of the boat when we get back to shore, probably under the trees with the late afternoon sun streaming through the branches, oars up . . . no, oars down in front of us. Arrange them carefully! Make sure the photographer doesn't chop off the blades. Can't ever trust a photographer, you know. "Everybody smile! One more, just to be sure. Good! Congratulations, everybody! I'll make copies."

I'm thinking to myself: Peter Mallory, Gold Medalist, United States Champion! Dammit, life is good! I am already taking off my shoes, standing on the couch, hammering the nail into the wall . . .

Now in my life up until this moment, two-thirds of the way down the course on Hunter Island Lagoon in the New York City borough of the Bronx on a sunny August day in 1965, I have actually coxed way longer than I have rowed, coxed at Kent School and then at Penn. Hell, I have coxed way longer than our coxswain, longer than Saul Berman! The coxswain inside of me notices that the crosswind has pushed us a bit sideways during my reverie. Our starboard oars are kind of close, soon perilously close, to those Albano buoys . . . and Saul isn't correcting. Is his mind also wandering? Is he, too, having an out-of-boat experience? He's my good friend. We will be roommates in another year. Should I call out a warning to him? But all summer we have been a team of chiefs and no Indians, everyone with an opinion, me worst of all - just ask John Hartigan - and all summer we have struggled to keep the talking in the boat to a minimum. I reluctantly bite my tongue and hope for the best.

Closer and closer we come. Finally it happens. All four starboard oars, one by one, each in its turn, strike hard on the next one of the infernal, immovable Albano buoys - bang, Bang, BANG, BANG! The boat shudders to a complete halt. We are in total shock. Our rhythm, our reveries have been blasted to bits. We start again, but our composure has been shattered, and the field is already nipping at our heels. Detroit Boat Club motors by. Can we rally?

In the final 500 meters, I'm getting used to a new idea. I'm thinking to myself: Pete Mallory, Silver Medalist, United States Runner-Up. Didn't make me feel better. We never did get around to taking a picture of that almost-marvelous boat. Bridesmaids. For us, there were only two places in a race: first and sh*tty.

And so on that day I swore to myself that I would continue my quest, my odyssey. I would row at least one more summer and earn the U.S. Championship that had slipped through my fingers in that mild but steady crosswind. I wonder what I would have thought back then if I had known how long I would eventually have to travel on my Gold Medal odyssey, how many continents I would have to cross, how many Herculean labors I would have to perform . . .

The Detroit Boat Club Crew that won? Stroked by Jim Dreher. Fine guy. Solid guy. Go buy a boat or some oars from him. He and his wife Colleen run Durham Boat Company. Is this a small world or what?