We were fastest in the dark. Early races that Spring break at Potomac Boat Club, whichever one it was, were slow getting off. The lightweights, the poor winkies, lost by "curvature of the earth" Bill recalls, and disbanded soon afterward. Brown University has not had a lightweight program since.

The women in particular, if they have a lightweight, are apt to put her in a heavyweight crew and she is likely then to make the national team.

The downriver race started in Spring flood just below Great Falls. We thundered past the rocks called Three Sisters. The two crews, dead even, were at stratospheric rate. Somebody must have seen what was happening at the start, but the Potomac went dark right during the body of the race.

I cannot believe that all the high school kids perched precariously on improbably tall bridge abutments nestled against the Potomac Boat Club could see us but we sure could hear them.

Those tall columns of rock bristled with high school students whenever Washington-Lee had a home race. Crew and Charlie Butt, who talked a bit like Jimmy Stewart, were extremely popular.

The danger of the rocks also was part of their lure. All the kids up there were part of the cultural scene that produced Tony Johnson, Bill Engeman, and countless others.

Those stanchions were left over from the one hundred eighty-four mile Chesapeake and Ohio Canal, which was operational between 1831 and 1924 and now is a smaller national park.

Mules pulled coal-carrying boats up to 90 feet in length along a wooden water trough that crossed the Potomac pretty high up.

Although the wood of the trough was chemically treated, water still leaked down onto complaining boaters passing underneath.

As you can imagine, the noise of a whole high school's worth of screaming kids teetering on old abutments seemed weird but exhilarating too.

To add to the danger, as we crossed the finish line, one half a lengths ahead Mouse saw the concrete of the Key Bridge loom directly in front of him.

Great athletes can see in the dark. And react to anything quickly. And sometimes are very articulate too.

We dug in our oars and missed the abutment by five feet.

On the way home we stopped off in Philadelphia, borrowed some heavy boats, and just as the year before lost a race or two.

Back in Providence however we had use of the Stein again and Whitey really came into his own.

We did things that other crews don't. At the end of a 12- mile practice we would sprint the final quarter-mile to the porcupine.

Maybe, but it was great for the spirit. And taught Mouse to make perfect high speed landings. And taught us how to become horses heading for the barn at the conclusion of every race.

And taught us how in a sport where everything is control to be uninhibited.

Of course there were the two-plus mile runs to and from every practice, some of them ending with uninhibited sprints too.

Whatever else Whitey did he got us to do incredible miles and more important to do so with pleasure and excitement.

The excitement! I still get excited thinking about it.

But we were-- primarily-- blade-coached crews. Or, as Peter Amram said at one of the reunions, "Hit the catch and don't run into anything."

Me, I had a special relationship with both Whitey and Mouse, who sometimes would reinforce Whitey's words. "Bottle," either of them might say, "You're chinning yourself on your oar."

I got more than my share of the overall attention.Â I don't think this was on purpose but I must have enjoyed it in view of later career choice (coaching gigs at West Virginia University and Skidmore College). 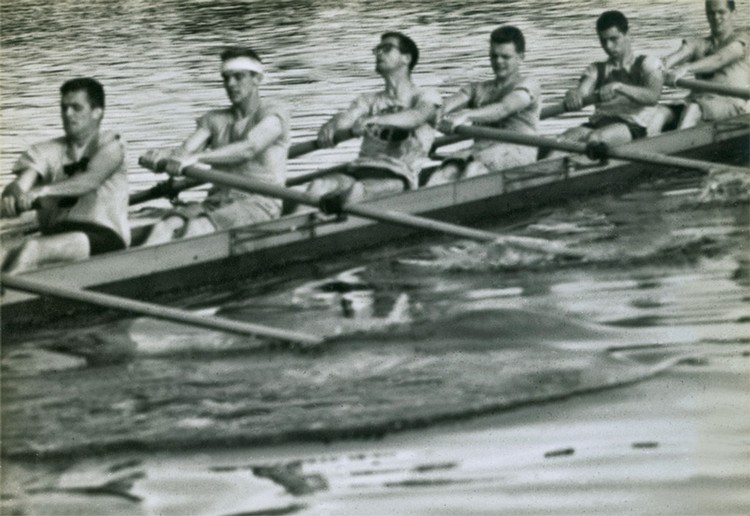 Bill and Peter and I continued in the sport. We all three got to win a lot both as oarsmen and coaches and organizer (Bill).

But some of the greatest coaches in the history of the sport didn't come from Brown but from Syracuse. Gordon Whitey Helander, Steve Gladstone, Tony Johnson, Vic Michalson-- all from Syracuse.

After us, Whitey was great for Trinity College in Hartford. Trinity rowed on the same river where I launched the BeePee just farther up. Trinity showed at the Dad Vail almost giving Whitey a fourth championship. Did Trinity ever do something like that before? I don't think so.