Brown crew didn't look like Yale, Harvard or The University of Washington. We were not an official sport but an informal organization with the privilege of rowing on the Seekonk River at the top of Narragansett Bay out of the Narragansett Boat Club, which is the oldest rowing club in the United States unless the Detroit Boat Club is.

Maybe the two clubs can hold a race to decide once and for all which is oldest. 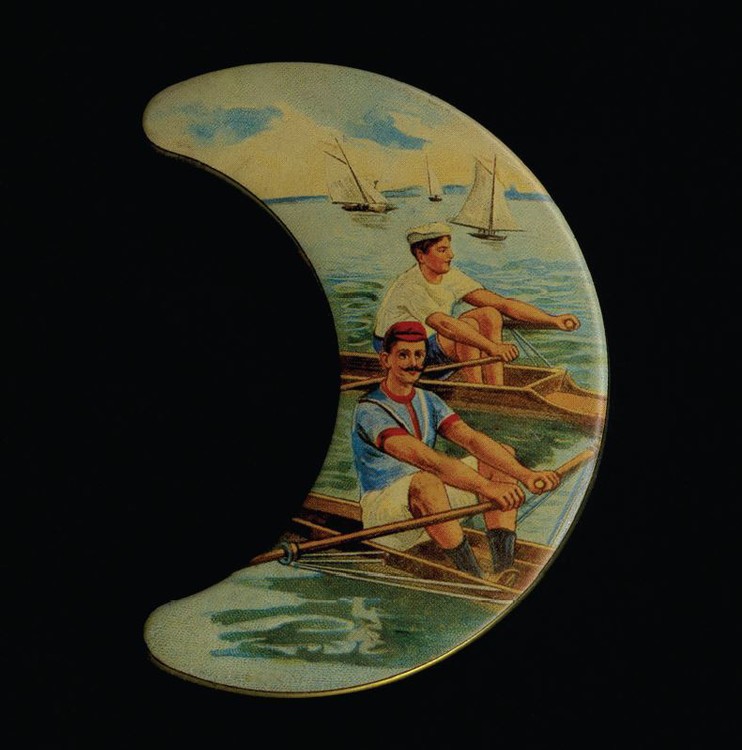 The NBC, a two-story cigar box with an open balcony perfect for watching crew races sports a toney coat of new blue paint today and is full of thriving young professionals relaxed enough from their daily endorphins to talk with anyone.

The little building is so full of shells and oars and sculls that they are spilling out in the yard and onto stretchers on a new state of the art floating dock.

Such was not the case in the late 1950's when the building's color was drab off-white. Aside from an independent sculler or two only the small Brown Rowing Association made use of the internal racks and tall oar holders.

It was a hot clear day still more August than September as thirty of us, candidates for the 1957-8 Brown freshman crew stood crowded around the boat club's open barn door staring down a precipitous ramp at a hunk of black driftwood that looked more like the shattered hull of a hundred-year old shipwreck sticking out of sand than some kind of dock.

Nothing about this lump of pickled oak resting on uneven muck as black as itself was straight, everything bulbous. 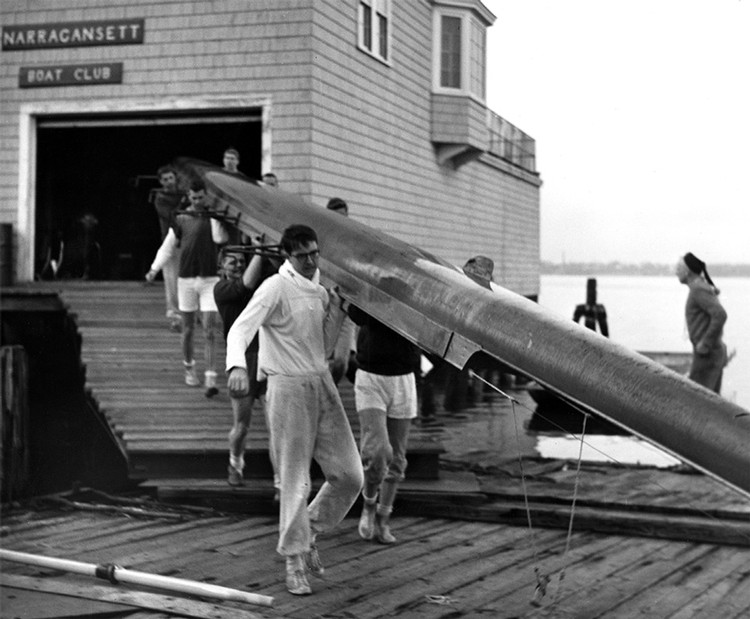 "Spring tide, low water division due to syzygy, the moon, earth and sun in a straight line," a short boy named Albert muttered (a cousin of Buckminster Fuller?) In two days he would be gone not having taken to crew or crew did not take to him.

No coach or other person of authority was available to speak to us, but of the three of our number who had rowed before, one suggested we go down the ramp and re-assemble on the dock.

He was Bill Engeman, six foot five inches, one hundred eighty-five pounds, whose curved back made him look like Ichabod Crane.

Fine, go down the ramp...maybe...without slipping and falling?

It wasn't as if we were neophyte skiers in New Hampshire at the top of the headwall at Mount Washington realizing that what lay before us was too steep for anything but double pole vaults. Steep here yes but not impossible. And somebody had nailed slats across the ramp thus offering a side-slipping human foot a bit of purchase. And we didn't need Albert to tell us that in six hours the ramp would be an amost level highway connecting the NBC with the rough dark wood of that singular dock.

Assuming of course it still had the ability to float on water's surface rather than five feet under. It was a reusable gunnery target built on two different levels. The Navy would tow it out into Narragansett Bay or the Atlantic Ocean and shoot at it. And looking down that very first day one could see on the opposite side from the step that locked the thing together a nine foot long furrow caused by a burrowing shell.

The shell, skimming at great speed could not have been more than three inches above the water for a long time before it plowed through the wood.

Jokes about other kinds of shell hitting the dock would come later.

One by one, down we went. With the whole group reassembled, Engeman said, "I would suggest that you take your shoes off."

This made perfect sense. No one wears his shoes in a rowing shell since shoes for everyone are attached to the bottom already. And we were going to row-- that seemed clear. There were enough old shells in the racks for three boatloads and enough small persons in the crowd to supply three coxswains.

Engeman didn't really want to figure all this out but there was no one else to do it.

How there came to be so many persons standing there was a wondrous thing. My only thought is that the Brown eight-oared "varsity," who had for a coach the red-faced Bobbo Read, and the Brown lightweights whose coach was student volunteer Hugh Carmichael had done an excellent job of identifying tall persons at Faunce House in the center of Brown and cajoled them into walking the mile and a half down to the Seekonk.

Everything would change on the second day when the university, bemused at the news of a thirty-person turnout was able to dispatch to the river the varsity hockey coach Jim Fullerton, a great coach who knew little about crew but was unusually curious about it and willing to help out with the freshmen a second year.

This however was still the first day and Bill Engeman may have been in a state of shock and therefore didn't say much.

The resulting confusion caused six of us to make little fidgeting motions with our feet (and I was one of them). Suddenly sticking out of our socks were long black splinters like quills as small voices cried "ow!"

Splinters that long were easy to pull out but the pain of them might linger for decades.

The three experienced oarsmen meanwhile along with persons they arbitrarily chose to accompany them climbed the ramp then came back down with twelve-foot sweeps which they lay flat.

The three with experience included Peter Amram, who just had rowed 7 for Lower Merion High School in Pennsylvania as it captured the national schoolboy championship and Bruce Babcock, who rowed at prep school somewhere and therefore was wearing leather booties that kept him from splintery victimhood.