Introduction: How I Came to Row

We lived on the west bank of the Connecticut River eighteen miles up from its mouth.

From my basement window I could see the tilt of a red nun buoy telling whether the tide was coming in or running out.

A friend from some previous place where we lived and I found an old bureau drawer and painted it silver with an overlay of black arrows and letters.

His name was Peter Scheidt, mine Bottle Escher. From that we painted a name on our craft, the BEE-PEE.

From scrap wood we hammered together a double-ended paddle and painted that silver too.

In launching the thing we discovered that with Peter in it the BEE-PEE floated deep with the writing underwater and one inch of freeboard.

With me in it two inches of silver paint showed. But taking turns, we paddled across the shipping channel out to the buoy and back.

While Peter was paddling, a huge Poling Bros. red freighter went by. Its wash rocked him but didn't sink him as someone on the deck watched in disbelief.

The next day Peter returned to Maryland and I never saw him again. Me, I was left with the craft to myself and took longer and longer paddles. 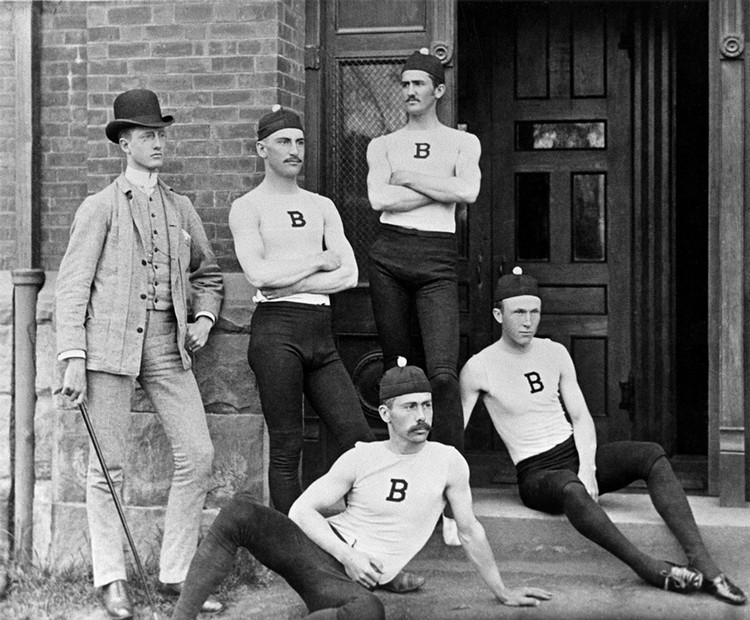 Skinny guys who hadn’t filled out yet

I was halfway up Higganum River when my father and two sisters came looking for me.

Where Higganum River turned into a creek there was the wreckage of an old mill. The creek and its tributaries were an industrial park for three centuries and I hoped to find the remnants of a waterwheel.

Our family boat had a seven and one half horsepower Scott-Atwater outboard motor on the back. That little sewing machine of an engine was far superior in sound and performance to Mercuries and Evinrudes.

The news said a hurricane was about to hit, so my father piled the bureau drawer into the fourteen-foot boat and we all went home.

The hurricane missed. A few years later I stood in a doctor's office while the doctor who had been a coxswain at Princeton advised that I try out for crew when I got to Brown.

"I've seen it many times," he said." A skinny person like yourself decides to row. In a couple of years he's put on twenty or thirty pounds with all of it muscle."

Actually, I put on ten pounds and didn't bulk up. Physiologically, I was more like the captain of my women's varsity twenty years later when I was the coach at Skidmore College on Saratoga Lake in upper New York state.

Somehow we had a copy of the New Haven Register that day on the bank of the Connecticut River even though New Haven was in a different part of the state.

Higganum was part of Haddam which was at mention in a Wallace Stevens poem:

"O thin men of Haddam, why do you imagine golden birds?/ Do you not see how the blackbird/Walks around the feet/of the women around you?"

My sister was having a party. In the late afternoon light I stood with one of her guests Arthur Allen at the river's edge.

"Higganum used to be called Hegamumpus which meant Axe Head," I explained.

I further said that Thirty Mile Island, the northern tip of which we could see as we gazed along the axe handle downriver was miss-named since it was only seventeen miles from the river's mouth. He agreed with me that this was an interesting memorialization of human error. And that was the party for me. I didn't have a conversation with anybody else.

The night turned black. The guys lugged an old broken piano that didn't work from the front of the basement where my sister and I had our bedrooms out onto the river bank.

The people everywhere were too old and drunken for me. The Dutch Colonial called" Smuggler's Tavern" offered two choices: down into the hidden sub-basement where escaped slaves making a stop on the underground railway used to hide or go up to the fifth floor and read the newspaper, which I did.

From outside through blown glass the noise of sledgehammer blows echoed up from the lawn I just mowed that afternoon next to the water.

They used the last of my lawnmower gas to set the piano afire. They were having such a good time. Huge orange sparks rose in the air.

The Yale crew coach Genial Jim Rathschmidt was talking a lot about tidal flow in New England rivers and his crew's chances the next day in New London.

"So tomorrow we'll be rowing the four miles upstream with an incoming tide behind us. You'd think that would make us faster, and it does, a little, but the downstream flow runs right over the heavier salt water with the result that we don't get the boost we might.

"And if the time goes over eighteen minutes we'll have trouble with our 7-man, Fink. He's very good but young. We know from our time trials: He lasts for eighteen minutes. After that anything can happen."

I was intrigued. So the next day I drove one of our two family cars to New London, found a place to park and sneaked aboard the train that was all set in those days to follow America's oldest intercollegiate competition called "The Race."

I'd never seen eight-oared crews before. I thought a usual thought that they looked like waterbugs and biremes and triremes.

After ten minutes of backing and filling the two boats while being held at their ends by homunculi in stakeboats both pointed up the river.

Through the glass of the train window you couldn't hear any shouted command but the very sudden racing start was a fluency of oars.

The coaching launches and a fleet of small motorboats followed. Massive pleasure boats were anchored on either side of the course in clusters providing for the entire four miles a running audience that focused eyes and energy inward on the racing lanes.

After twenty strokes Yale was barely ahead. A hill presented itself to the train full of Yale and Harvard alums all pressed against the windows on the west bank of the Thames that rhymes with James. We passed the hill.

Yale in the blue shirts now had a length over Harvard in crimson.

We went behind another hill. Two lengths now. Some kind of building, rocks, construction. Three lengths.

The race had lasted eighteen minutes. The Yale seven-man, the guy next to last before the stroke and coxswain, had stopped rowing. That would be Fink.

But he was just gliding back and forth with his oar waving in the air.

Harvard took one length back, then two, then three and was pulling even. With forty strokes to go Fink started putting his blade in the water. You could see his pulls were hard. The Yale bow crept ahead.

And I was hooked.