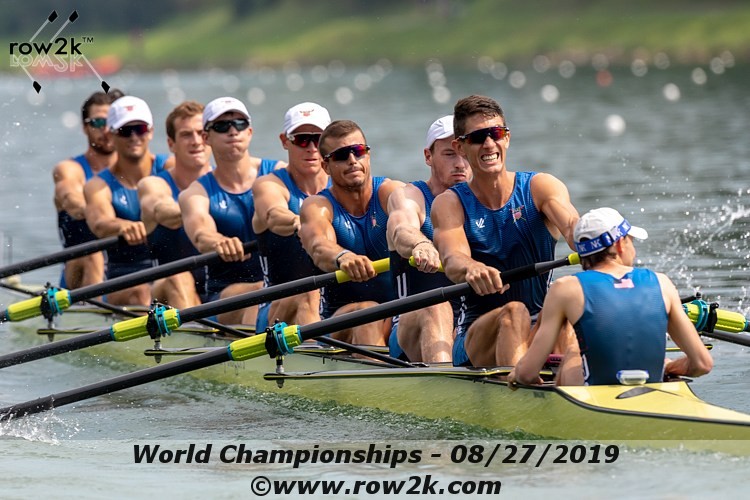 Men's eight blasts off the start

The crews from the two US eights had not been off the race course long enough to get their legs back under them after successfully advancing out of their 2019 World Championships heats Tuesday before they were talking about what they could improve on to go faster on Sunday in the finals five days away.

There were a few comments about feeling satisfied with what they had done right - the women's eight led from the start, and the men closed a gap between them and the Dutch eight to take second place at the wire, and advance directly to the final - but most of the postrace talk revolved around what they could change, how tight the field is, and how high the stakes will be the next time they race.

"The first thing I did when I finished that race was think about some of the mistakes that I made, and what I can do better," said women's eight coxswain Katelin Guregian. "I think we all did that in our own seats, and then we kind of came together and we talked about what do we want to change for the final.

"And that's not to say that we think that we didn't have an incredible race," she said. "But you get that from being internal. So we were able to be proud of what we accomplished, but we also had enough self-reflection to think about what we did, so we can make changes between today and Sunday." 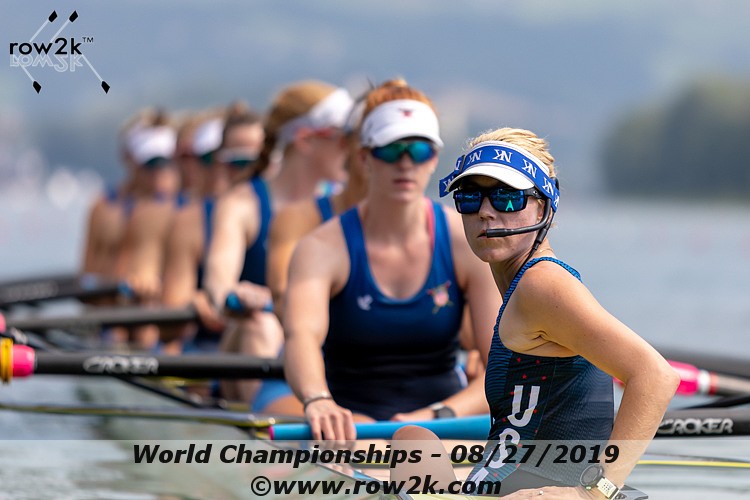 It was the same among the men's crew.

"Feeling alright," said men's eight stroke Austin Hack. "It was a tough race. We were working hard the whole way through. Now we're just trying to recover, dial it in again for Sunday. It's an interesting spot, because it's Tuesday and the next race is not until Sunday.

"All the competition is just looking to see how they can use the next five or so days to just dial up a couple tenths of a percent to be in the best spot on Sunday. We're looking for the exact same thing, I think we've had a good trip over here, but I think we'll want to adjust over the next five days to make sure we're in a perfect spot."

Seems like there could have been a tiny bit more confidence after what the two crews had just accomplished.

There was enough, for sure, but just enough, because the truth of the matter is, the other crews were not far behind, and some were in front in the men's case, and no one can be sure what the other crews will bring to the line Sunday once the rep is done, and the final lineups and lanes are set.

In both events, there are fast crews racing.

The women had 11 crews entered, the men 10. For each of those sets of crews there are only three medals, three podium positions, available. But even more important, only five boats each from those two events can lock up a guaranteed spot in the Tokyo Olympics next summer. Call it a job well done for today, and then reset the clock back to the unknown, and break out the worry beads.

"I thought they rowed a really smart race," said men's head coach Mike Teti. "But all those crews are so good, and there is no real margin for error. I'm glad they executed well at the end, but I think this is the toughest eights field ever, at least that I've seen. I've never been so happy with second place in a heat.

"We feel fortunate to get through, and it's going to be really hard in the final. It doesn't get any easier. But I am really proud of them. I think it says a lot about them when you're tested, and you're a little bit in jeopardy, and you're able to pull it out.

Overall, the third day of racing for the US in Linz-Ottensheim, Austria was a good one. Both eights are in the final and have to beat only one country now to qualify for Tokyo in one of the top five spots, and the men's four made it out of their rep to the semifinal.

Of the eight total US crews, only the men's quad was eliminated from having a chance to qualify in the top eight Olympic spots in this regatta. If the US is going to have a men's quad in Tokyo, it will have to come through the last chance qualification regatta (officially the Final Olympic Qualifying Regatta, or the FOQR) in Lucerne next spring.

Like the eight, the women's quad opened their racing Tuesday and finished fourth. With only one spot open to advance from the heats, they will row in the reps. 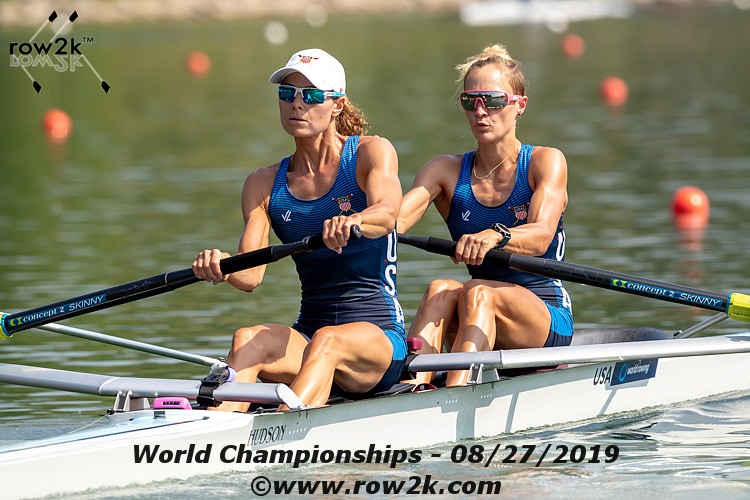 Men's Four
The day got off to a solid start with the men's four winning their heat convincingly and moving onto the semifinals.

After establishing a lead off the start, the US crew held the and prevented Switzerland from contesting to take the win, even though there were two available spots to advance, the US didn't relent.

"Our goal was to have a nice clean start, not get the rating up to high, and I thought we got off very cleanly," said Andrew Reed.

"We started pushing right off the start. We wanted to make sure we got a little separation, but those other crews are pretty good. They stayed with us. It was a real race for second at the end there, we were just doing our best to stay out of it.

"It was a good race, and we're excited to go to the semis. We were definitely mindful of the importance of this race," he said. "For some people, the journey would be done today and we just didn't want ours done."

Tom Peszek, the most veteran member of the crew, said he has had enough experience with reps that he feels comfortable dealing with the pressure. 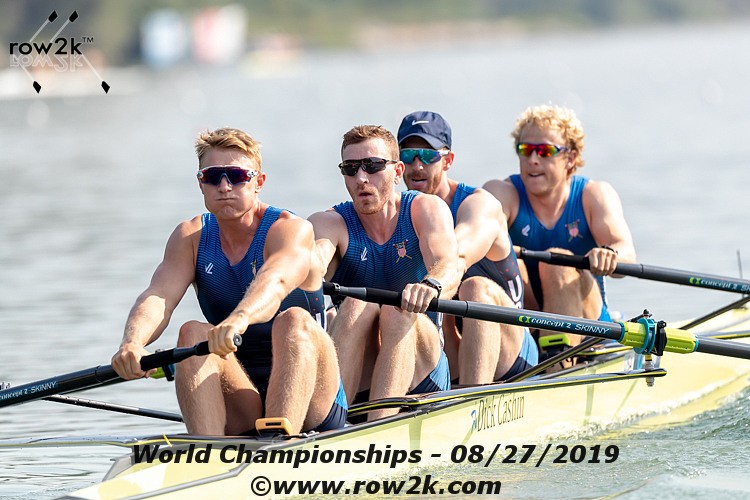 Men's four at the start

"I find myself in them a lot of times," he said. "It's not really any different than any other race. You're just as nervous, you want it just as badly.

"The stakes are higher, but every race you're out there, it's maximum desire to win, so the rep is no different in that regard. We're always mindful of everyone out there, there's no crew you can ever sleep on, because as soon as you do, they get you.

"We knew we wanted to get out there and to assert the start that we could, and we wanted to just know that whoever is out there, whatever they were going to do, we were ready for it," Peszek said.

After the remainder of the reps and preliminary races were finished, the program turned to the last heats of the regatta, starting with the women's quad. The Dutch took the only spot open qualifying spot, and the US, along with Poland, Germany, Italy, and Romania, will head to the reps. 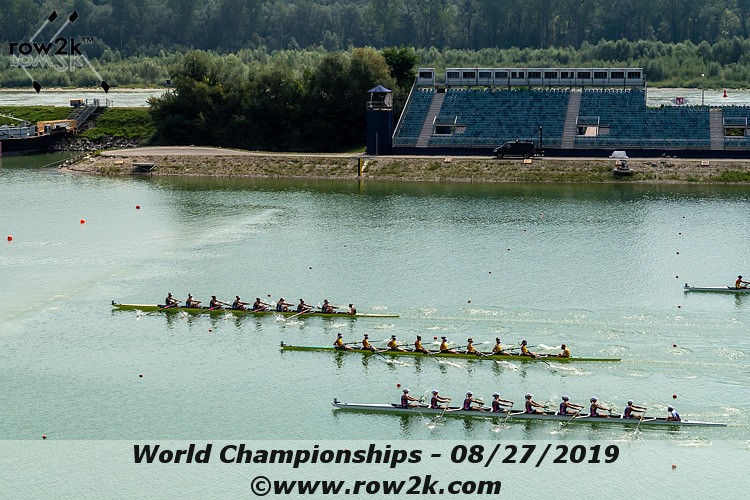 US women crossing the line in first

The Eights
Then came the eights. The US women won their heat to move on, while Australia, Russia, Romania, the Netherlands, and Denmark went to the reps. In the second heat, New Zealand claimed the only available advancing place, followed by Great Britain, China, Canada and Germany.

"I thought it was great," said US women's head coach Tom Terhaar, of his crew's race. "They stayed calm, and internal, and they did everything we asked them to do. There's a lot of time between now and the next five days.

"Obviously, New Zealand's good, very good. But Australia is going to be very good. They're going to learn, and GB is good."

Terhaar said his crew would go back to work in practice Wednesday, and start prepping for Sunday.

"So, it's the same thing. Just start all over from scratch again come Sunday. Being in the final is great. It's one step closer to qualification. First and foremost, that's most important."

One of the crew who has been in these pressure packed events is Meghan Musnicki, who left the team after winning her second Olympic gold medal in the US eight in Rio, but returned this year for another run.

"That was awesome," Musnicki said. "I love racing, and racing from in front is great. It was good to get out there and race in this lineup and see what we could do. We executed our race plan the way we wanted to and stayed really internal, which has always been a characteristic of US crews. It was a good first step.

"We took care of what we needed to take care of today, so it's on to the next one. The reality is, it was the heat, and we still have the final, and it's top five to qualify for Tokyo. We've got our eyes on what needs to be done, and this was a good first step."

In the first heat of the men's eight, Germany dominated most of the way. Australia managed to close the lead a bit, and finished second, moving those two crews into the final. In the second heat, Great Britain took the lead and the Dutch followed.

The US was racing on the opposite side of the course, but managed to track both the Dutch and New Zealand. Going into the final 500-meters, the Dutch led the US, but that changed in the closing strokes to the line.

"That was our first race against other boats all summer," said men's coxswain Julian Venonsky. "That is kind of how it always happens. Because of selection, we're on our own until we get here, so it's always fun to be next to other boats, to be in the crowd. Going into that race, we just wanted to race a really good race, see how we felt.

"It was a hard piece. Every boat here is superfast," he said. "I had my eye on the British because they are one of the, if not the, fastest boats here," he said.

"But it was a little tough with the Dutch and the Kiwis being so far away (in the far lanes) that I just made sure I kept my eye on that Dutch coxswain, just making sure that we were ahead when it came to the line, just knowing there are two qualifying spots.

"We did what we needed to do. I think in that last three-hundred meters, to me, we were barely up, if anything. But I just wanted to be in a little more comfortable lead, so I maybe called for a little push." 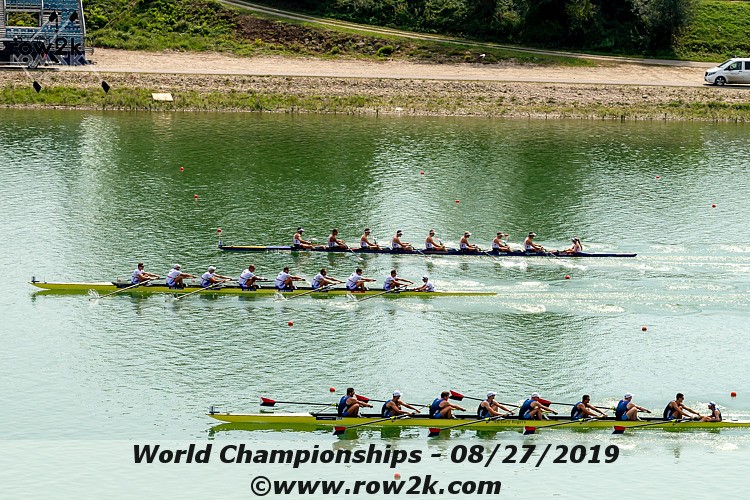 Men's eight edging ahead at the line

Fist Pumps
Excitement on the start line is always fun to watch. Check out this epic fist pump action from Charlotte Wesselmann, stroke of the German eight. The series starts here.

Pardon the Technical Difficulties
FISA was having a bit of trouble with their web site Tuesday, and could not get results online. No worries. They tweeted the results out.

Black Arm Bands Honoring Ryshkevich
While it has been a week since Belarus para single sculler Dzmitry Ryshkevich flipped in practice last Tuesday, but several crews continue to honor him, wearing black ribbons on their racing unis. 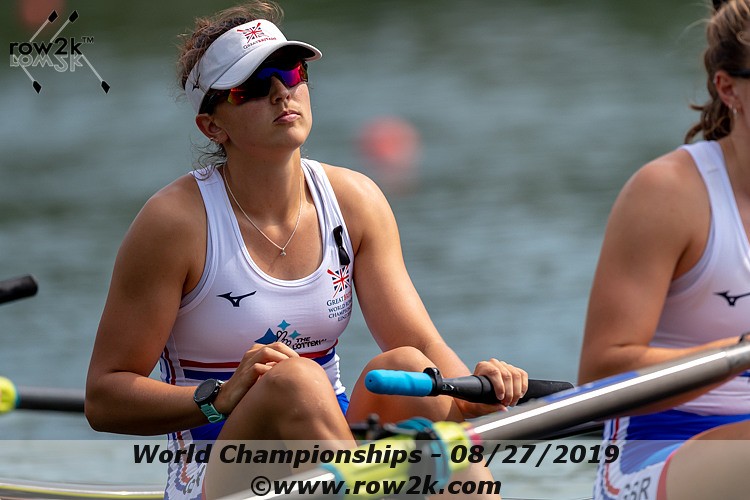