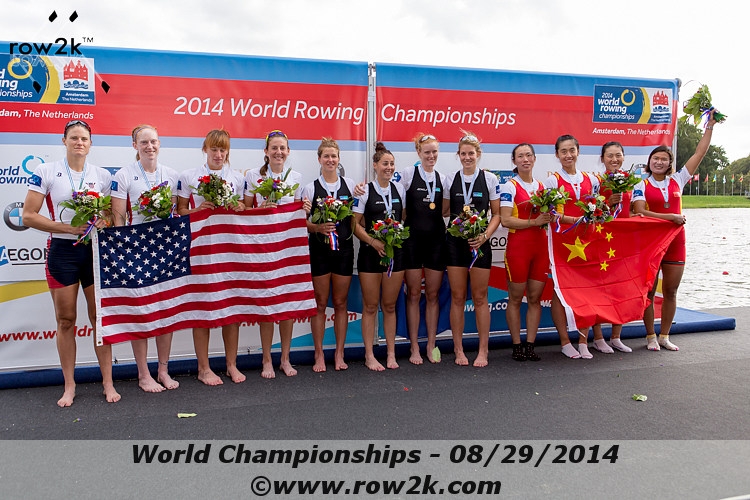 When you post a headline like the one I wrote on Wednesday, you really can't say the same thing, only moreso the next day, or you start sounding like the guys who start off closing ceremonies every single year by saying "the best (insert your preferred event here) ever" – it's starts to sound silly after a while.

Granted, no one flipped today. But the following did happen:

A sculler who lost her oars twice, including having one spin backwards in the last five strokes of the race, won a Worlds final.

A world record was broken in a C final – or at first it wasn't broken, then it was, then… well, read about it here.

And then that same record was broken several hours later, in an A final.

A total of nine events posted new world records, six in the A finals, and three in the semis.

These included one by the New Zealand coxed pair, the oarsmen of which also own the men's pair record already; they broke the old record by nine seconds.

That coxed pair record had stood since 1994 (in Indianapolis), a full 20 years.

The light men's pair record also has stood since 1994, but was not set in Indy – it was set by Ireland in Paris.

A men's double went sub-six minutes, a time once coveted by men's eights.

The light men's eight from Turkey won a bronze, their country's first Senior Worlds medal in any event, ever.

A US sculler who underwent major surgery in July and was on a cane when she arrived in Amsterdam won a bronze medal.

So yeah, it was a pretty extraordinary day.

Women's Four
The days A finals got underway with a big WR as the New Zealand four blew open the women's four race, setting a new world record by a massive 11 seconds. The US four got off to a little bit of a slow start, and then clawed their way back in, but the Kiwi's lead was too solid, and the US had to settle for silver, five seconds under the old record, but six seconds behind NZ, and three seconds ahead of China.

Stroke Adrienne Martelli admitted her disappointment at being unable to defend the US title in the event.

"I’m pretty disappointed, it was a tough race," she said. "Honestly, it was a fast race so it’s hard to kind of still grasp what happened in it." Martelli was thoughtful when asked how to deal with this kind of disappointment in big races.

"I think part of it is letting yourself feel the disappointment, and then at a certain point you have to say okay, that’s behind now," she said. "Then you have to look forward again and say what can I learn from that experience? How am I going to make it better? How am I not going to miss out on that opportunity the next time? It’s just taking it as much as you can and learning from it and using it as motivation for the next time."

Tessa Gobbo agreed. "When I think of when I was younger, what I learned from doing all this, and just a tough long year, is just really doing your best so you can always be proud of yourself," she said. "Disappointment happens, and it’s really important to take what disappointment we have now and push us through another year and get better. Hopefully we’ll get another shot next year to do it again."s

Men's Coxed Pair
The next race – and the next World Record – was set by the famous Kiwi Pair, this time riding with a coxswain, Caleb Shepherd from the NZ U23 eight. The pair already holds the record in the straight pair – I wonder how many people have held simultaneous world records in different rowing events. Not many in any case.

After the pair sprinted out of the medals area to retrieve and then start pedaling on two stationary bikes so they could start their recovery for tomorrow's straight pair final, bow seat Eric Murray offered his thoughts on the challenge of setting a second world record.

"Basically to set a world record you’ve got to row well," he said. "The conditions were there, if very very rough, but we knew if we rowed well we were going to be able to achieve it. So it was really just a matter of rowing as well as we could. We had a good rhythm, we didn’t need to go overly crazy, so we did the job. We knew it’s what we were capable of so we just had to make sure we did it."

With the doubling attempt going to plan so far, I asked Murray if it has been fun to this point.

"One more to go," he said. "It’s been a struggle; it’s a learning experience in the coxed pair. I think if you make it heavy it goes heavy. We always just try to be light and quick, row the boat how it wants to row. It’s not going to go fast because you’ve got so much extra weight, but if you row it properly it’s going to go fast for you, and that’s really what we did. Don’t let it slow down, keep it on top and that’s it."

Check out this interview with coxswain Caleb Shepherd to hear what it's like to be in the boat with the boys.

Light Women's Single
The light women's single was a wild affair, with medal positions held by five of the six rowers at some critical point of the race, the eventual gold medalist Eveline Peleman from Belgium losing her oars at least twice, and US sculler Kate Bertko coming back from major surgery that had her on a cane four weeks ago to take a bronze medal almost to the day she could walk without a very noticeable limp.

Peleman lost her oars once in the third 500, and then again right in front of the grandstand, with about six strokes to go. And this wasn't a bobble; we're talking oar out of hand and spun around backwards.

Bertko's story deserves its own space; you can read it here.

Light Quads
The Greek light men broke a 22-year-old world record, but for the hometown crowd, the victory by the Dutch light women was the indisputable highlight of the day. The win featured the obligatory Dutch swimmers to boot, many of whom planted kisses on the winners, male and female alike. Ah, amour… oops, that is not Dutch

Light Men's Eight
The German crew won the race, followed by Italy, but it was the bronze medalist crew from Turkey that pretty much stole the day. It is Turkey's first ever medal in a senior World Championship, and the crew reveled in their history-making race by celebrating appropriately well, including perhaps the only coxswain toss for a non-winning crew I have seen at a Worlds (toss sequence starts here). Germany's cox toss starts here.

"It was very hard," said coxswain Kaan Sahin. "We thought at first we could get a gold medal, but this is our first medal at a World Championship, so it is very good!"

After leading in the early going, the US crew finished fourth of the five, out of the medals.

B Finals
Light Men's and Women's Quad
Both US light quads won their B finals very handily, with the women missing the world record by less than two seconds. Light women's stroke Mary Jones said the crew knew conditions were fast, and wanted to get the most out of them.

"We knew it was world record setting conditions so we really tried to go for it and get the best time that we could," Jones said. "All week we’ve just been working on our race plan, and we were disappointed not to be in the A Final. So we looked to this opportunity to just build on what we were working on, to find another level and end the season on a high note. We approached it with all the attitude and aggression that we could left over from a week of racing, and put on a good show I think."

On turning things around to get ready for a B Final, Jones said the crew wanted to get the most from every trip down the course.

"It’s definitely a challenge," she said. "For me and one other girl in the boat, it’s our first international regatta, and being from the U.S. you just don’t have a lot of opportunities to race at this level. So you have to have a mental check going into a B Final that it’s a great opportunity to get racing experience. And there’s another season right around the corner, so you better use this level of competition to get the most out of it if you have any plans on coming back."

Jacob Georgeson of the light men's quad echoed a similar sentiment, and emphasized the opportunity for young rowers to learn the ropes, B final or not.

"You don’t too often get to end the season on a win, B Final or not," he said. "For three of us it’s our first time on the team, so the biggest difference we’ve found is crews start a lot faster. It has been our focus all week is to get out as quick as we can and try to hang on through the piece as best we can.

"We’d obviously rather have a finish in the A Final but for the race we had it’s nice to finish first. I always like to view every race as a learning opportunity, so it’s something to build on for next year. Every time you go out there, whether you learn something about the start, you learn something about the sprint, you learn something mentally about each race, disappointed or not you have to find something to work on and get better at and every time you go down the course that’s the opportunity you have. You have a small chance to improve yourself every chance you get to go. Every race you gotta learn from it whether you’re first or last."

The men's coxed pair finished second in their B final, for eighth overall.

Semifinals
Of most interest for US fans was the women's doubles advancement to the A final. After last year's B final win, the crew made the step up, and hopes to take advantage of it.

“We’re a step closer to where we want to be," bow seat Meghan O'Leary said. "Last year, we didn’t even make the A final, and this puts us in a chance to make the medals. It has been a huge, driving force. We knew we shorted ourselves last year, and we knew we were a top boat, we just needed to just pull things together. We wanted each race to be better than the last, and we hope we peak with the final.”

The men's single provided some intrigue for sure, with Marcel Hacker of Germany dominating the hairy conditions to get ahead of Mahe Drysdale to win the second semi. Ondrej Synek won the first semi fairly easily, but stayed out on the water to have a close look at the other semi; first he watched on TV, then stuck around to watch the race come by as well.

And then there was the Croatian sub-six in the double; the crew pulled in to celebrate a little.

And so did the Danish lightweight four, though they pulled in to celebrate a LOT here and here.