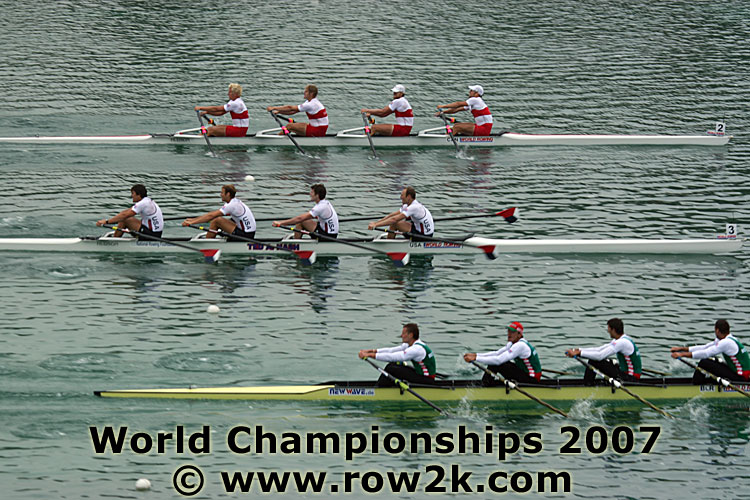 M4x rep goes to the wire

Another day of reps and quarterfinals, another routine day of gut-wrenching, suspenseful racing - as well as some stunning exclusions. It was a wild day between the buoys today; a number of false starts, a disqualification, several "Did not Start", and a couple of crews who folded mid-race, most notably the Polish LM2x of Kucharski/Scyz, double Olympic Gold medallists in the event, and unfortunately three cases of anti-doping violations.

To dispatch the bad news first, two Russian crews were excluded from the regatta for anti-doping violations, the women's eight and the lightweight men's double. FISA executive director Matt Smith said that no prohibited substances were used, but rather a prohibited method was used - intravenous infusion. Smith said that the investigation is still not entirely concluded, but that when questioned about FISA's evidence, the athletes admitted to using the method, and after a hearing that concluded after midnight last night, were excluded from the regatta this morning.

Recall that the Russians won the W4x at Eton last year, then were stripped of their medals when it was revealed that a member of the crew had failed a drug test; Smith gave more information about this incident today. Last year, on July 22, WADA conducted tests at the Russian training camp in Bulgaria, and found no positive tests. However, WADA, perhaps acting on a tip, returned the next day and retested several athletes, and found one positive test. The sample was sent to a Paris laboratory for analysis; the laboratory closed for the traditional Parisian holiday, however, and the results were not reported to FISA until late September, after the World Championships. "We are very upset at the use of a lab that was closed in August, during the height of the international sport championship season," Smith said. "FISA typically has results within 10 days of testing; had this lab not been closed, we would have had the result before the World Championships, and would not have had a situation where we had to take back medals, something we have never done in the history of FISA to my knowledge."

Either way, the use of these tactics are apparently not an isolated incident. Certainly, there was going to be much greater scrutiny on the issue this season, both with China's emergence and the Olympics looming, but I'm not sure anybody expected this. The official statement from FISA:

They were in breach of Article 2.2 of these Anti-Doping Bye-Laws; Use of a Prohibited Method. Each of the rowers have been declared ineligible for a period of two years from the date of the decision, 28 August 2007.

As a result of these decisions, the Russian Lightweight Men's Double Sculls (LM2x) and the Russian Women's Eight (W8+) will no longer take part in these World Rowing Championships.


It would be a mistake to allow cheating overshadow the quality of racing today, however; the buzz in the grandstands irrespective of nationality or allegiance was unquestionably focused on the first of the men's quad, which came down to a photo finish. There was a heap at stake in the race; only the top 11 crews from this World Championships get an automatic berth in the Olympics, so a failure to make the A-B semi squashed any hope for earning one of these spots. The United States came through from a somewhat distant fourth to sprint into second two strokes before the line to take the second of only two semifinal qualifying spots, 6/10 of a second behind UKR, and 4/10 ahead of Canada. Their final 500 was a full 1.5 seconds faster than any else in the rep.

"We were in fourth about a length down, and I could hear them, but I couldn't see them," said US men's stroke Mark Flickinger after the race. "So we started rowing higher at around 700 to go, and just kept going up and up. We had nothing to lose at that point, and at the 500 we were at 38, but we still stuck to our plan in the final 500 and I think that made us able to go faster as the rating came up. I was pretty proud of our crew that we could stick to the plan, and we were able to get through.

Looking ahead to the rest of the week, Flick might move some of the crew's speed around a little bit: "I'd be happy if we were a little faster in the first 1000," he said with a quick laugh; "but for today I'll take it."

The US men's eight won their rep today with a solid row that gave them a five-second margin by the finish line; the rep was arguably the "easier" of the two men's eight reps, but the US time was the match of that of the second rep, which was much tighter, so there's that. US coach Mike Teti continues to work on fine-tuning the crew: "It's a young crew, so hopefully you try to learn something from each race," he said as his crew came off the water. "We tried to make a few small changes, and then you try to build off the things you do well and work on the things that need work. We're still not out of the woods, but of course it's better to win the rep than not."

The women's eight endured having their race called back before posting a win in their rep today; the only race called back thus far in the regatta, the reason given was "misalignment at the start."

The US men's coxed four started off the day's racing with a close brawl with the defending champion German crew, which has three members of last year's crew returning; the final should be another bruiser if the US crew can do enough damage early to take the hometown German fan base out of it as the crews come down the stretch through the massive grandstands.

The remainder of US crews duly advanced today, making a decent day for the Americans overall: the LM4- compensated for a slow start with a good third 500 to advance; the LW2x did it just the other way around, frontloading their race by leading to the 1000 and holding on to advance; the LM4x rowed in the middle of the pack to take third out of four advancing spots; and the LW4x rowed in second the whole way to advance.

As the reps conclude, the Olympic qualification sitch starts to crystallize somewhat; only US casualty to date is the LM2x of Andy Liverman and Rich Montgomery, who will race in the C or D final and miss out on direct qualification for Beijing as a result.


The US will have a chance to qualify a light double at the Olympic qualifier in Lucerne next summer, where two crews will earn the chance to go to Beijing; however, this was made potentially a bit harder when the stroke of the Polish double injured himself on the first stroke of the race today, and stopped rowing about 10 strokes later. Before this summer, the Poles were the World Record holders in the event, and won gold medals in each of the past two Olympics. If the injury is not too bad, they'll be sure to be on form next year. A similar episode occurred in 1999 when the Poles failed to make weight and did not race; they made the Lucerne qualifier look like a club race in 2000, whew.

"Woah" result of the day: Egypt beat Germany by a length in the Quarterfinal of the LM4- today, knocking the Germans out of the A/B semis and out of any chance of direct qualification for the Olympics.

People go to the well in the rep: row2k saw the Czech LM2x, locked in a death struggle with the Austrian crew for the last qualifying spot, come to a dead stop two strokes before the finish line as the stroke appeared to pass out; the crew drifted for a few seconds, then righted itself, crossed the line and gradually got themselves back together.

The second rep of the women's eight was called back after 100 meters for "misalignment at the start;" the sound alarm is a spooky one, sounds more like an air raid siren than something you would use to stop a boat race, yipes.

Racing took place in lanes 1-6 for most of the morning until the fairness commission intervened during the men's quads, either due to reasons of wind or the way the big eights warming up churn up the warmup area. Either way, the polling of the crews, the last thing to happen before the start, was already underway when the official stopped and eventually asked the crews to move over a lane. When they all got locked on, he said simply "Okay; we will start the whole process over again. Two minutes?"

Crash landing: the Italian M8+ won silver in this event last year, but today they finished last in their rep, bumping them down to the C-Final, whew.

Given the rainy conditions and temps in the 50s, the FISA uniwatch people (I would call them the "uniforms Nazis," but for obvious reasons probably should opt for another language) shifted their attention from missing undershirts to longen schlavens and tights; about a half dozen crews were asked to change at the line.