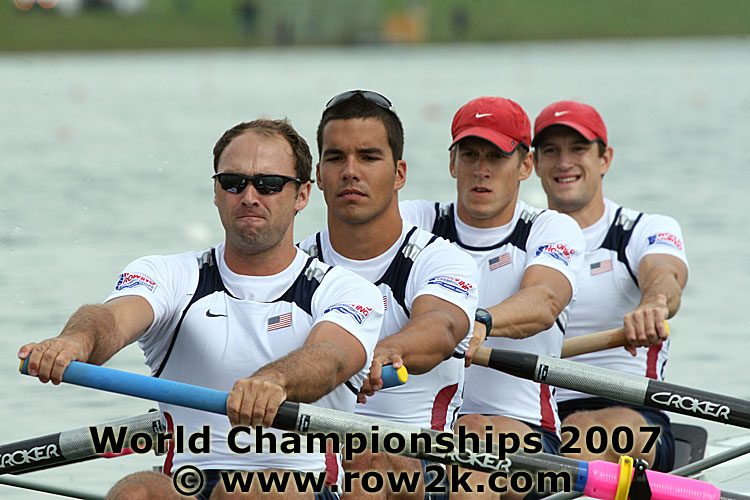 US M4- wins their rep with new lineup

After three days of high temperatures and light tailwinds, this morning brought much more Munich-like weather, with temps in the low 60s and a direct headwind. The wind built over the course of the racing, resulting in the slower times you'll see in today's results.

As I mentioned yesterday, today's racing was a grab bag of different events, including reps, quarterfinals, and races for lanes; read carefully when you are scanning results to figure out what happened on the day.

This morning's racing got off to a bit of a bumpy start when the first race of the day was delayed for several minutes due to a PA problem at the starting line. The 4-5 uncomfortably silent minutes first thing in the morning could have contributed to what was a bit of a bumpy start by the US women's four, but they very quickly got themselves sorted out, and by 500 to go had clear water on the field and brought the race home the same, leading second-place Australia by over four seconds. They'll get priority in the lane draw for the final as a result; might as well give yourself the best shot possible, and there's nothing wrong with a good full pull on Tuesday before a Saturday final (tho' it's worth noting that bow seat Portia Johnson is also doubling into the pair now).

Meanwhile, the US men's four had a new look for the reps today, with Beau Hoopman moving from stroke to bow, and the rest of the crew moving up a seat. Bryan Volpenhein ends up at stroke seat, and while the change seems like a big one in the middle of Worlds, the crew had actually trained considerably in both lineups throughout the summer. Today's rep showed that the change certainly wasn't too jarring, as the crew led from wire to wire to head to Thursday's semifinals.

(Aside: the same M4- rep included Igor Boraska of Croatia, who rowed at Brown University as an undergrad. Boraska has been around for some time, having raced the coxed pair in 1994. He also belongs to a very select group of athletes who have competed in both the summer and winter Olympics, having competed in the bobsled for Croatia.)

Michelle Guerette's 2007 summer success continued apace today as she won her quarterfinal with a very controlled effort that put her ahead of World erg record holder Sophie Balmary of France. Guerette put together the fastest middle 1000 of the quarterfinal to come from third into first position by the line; Michelle's racing has been very poised thus far, and she seems very unlikely to get too rattled; we should see her best this week.

The US double of Matt Hughes and Sam Stitt drove the pace car in a three-boat pack in their three-to-qualify quarterfinal; although the gap back to the non-qualifiers was sizeable, it's always good to get a W under your belt in the qualifiers.

The US women's double of Ala Piotrowski and Jenn Kaido placed second in a similar scenario; the race was much more spread out, but the crew was never really pressed for their qualifier spot, and move on to Thursday's A/B semifinals.

The US men's pair of Kyle Larson and Jason Read paced themselves just out of the top two qualifying spots for over half the race before pulling into second in the third 500; the crew has consistently done damage late in races. The pace of semis is sometimes less tolerant of this sort of pacing, but the crew seems to be getting more comfortable in their skin as the week goes on.

The US men's coxed pair was unable to to Canada and Germany in their rep this morning, and placed third out of the advancement; they head to the B Final. The Canadian crew included CAN men's eight coxswain Brian Price as well as former Harvard oarsman Kip McDaniel.

Germany's light eight won their race for lanes today, and best to keep them happy: with two pairs of brothers in the bow pair and 3-4 seats respectively, the potential for a sibling brawl after a bad row is probably pretty high. The US eight placed fifth in the six-boat race, a bit under six seconds off the pace; they had a bit of a rough start to the proceedings after their bow marker came off during the warmup; they had to spin their boat in the lane, get a new marker, spin again, and pull in for the racing. The crew didn't seem too flustered; they almost took it as an exercise in boathandling, spinning in place with minimal effort.

Have We Met Before?
We've remarked on this before in this space, but there are some athletes whose paths seem to cross an awful lot, over an awfully long time. In the rep of the M2x today, in adjacent lanes, Jueri Jaanson, Iztok Cop and Vaclav Chalupa traded blows, with Cop's and Jaanson's crews advancing, and Chalupa's double being eliminated.

So far, we've only been able to track down one final where all three raced, the Men's Single in '95: Cop was 1st, Jaanson was 2nd and Chalupa was 3rd. In the Olympics, although all three have never been in the same final, there's been considerable overlap as well:

Up and at 'em
There are two shifts of stakeboat kids each day; for whatever reason, the shifts split along gender lines, with one massive shift of boys, and another of girls. They're splitting up the more difficult wakeup call duties, alternating the early shift daily. Today the first batch of races was all boys, yesterday it was the girls, the day before it was the boys, etc.

One of the stakeboat girls was practicing her English pronunciation by echoing starter Mike Haggerty's calls from the starting tower; with thoughtful, considered diction she quietly repeated to herself between races:
"Three minutes."
"The United States of America."
"Two minutes."
"Russia, please come to the start."

What Exit?
Since the very first race of the regatta, regatta officials have shifted the race lanes "to the right" for all events; so, for example, a six-boat race would row in lanes 2-7. this is partly to create a buffer from the warmup area for the lower-numbered lanes, and also to test the method in case lanes need to be shifted for reasons of fairness, as the quartering headwind from port is the wind most likely to cause problems.

The bow numbers, however, still reflect a "normal" draw - so in the same six-lane event above, the bow markers would read 1-6, but the Lane 1 crew would race in Lane 2, the Lane 2 crew in Lane 3, etc. It's not always completely straightforward; if, for yet another example, there is a four-boat quarterfinal, the crews may draw lanes 1-4, but they will be shifted as far "right" as possible, so they actually race in lanes 3-7. In this case, Lane 1 bowmarker races in Lane 4. In a 5-boat race, Lane 1 would race in Lane 3 - and so on. The frequent shuffles at the start kept everyone on their toes, at least.

Multinational Sculler
The Colombia women's single sculler is the daughter of an Iranian man and a Colombian woman, and trains in another country still: she rows at Riverside Boat Club in Boston. Add to that the fact that her coach is British, and she covers a lot of international ground. She also looks much more European than northern South American; she could as easily pass for the sculler from the District of Columbia as from Colombia.

Also, as we've mentioned in past years, Philadelphian Mark Gerban is representing Palestine in the light men's single scull; he just missed a spot in the A-B semis today.

Bearing Fruit
The starting area is rimmed by thickets of generic-looking shrubs, but when your photographer climbed the hill to take shots from high up the berm, he found they are actually a giant thicket of fruit-covered raspberry and blueberry bushes.

Wednesday is another day of mixed reps, quarterfinals, and lane races; it's the shortest schedule of the week, thankfully, as the weatherman is calling for "Heavy rain" and a high of 60 degrees. Brrr; we'll be out there, of course!