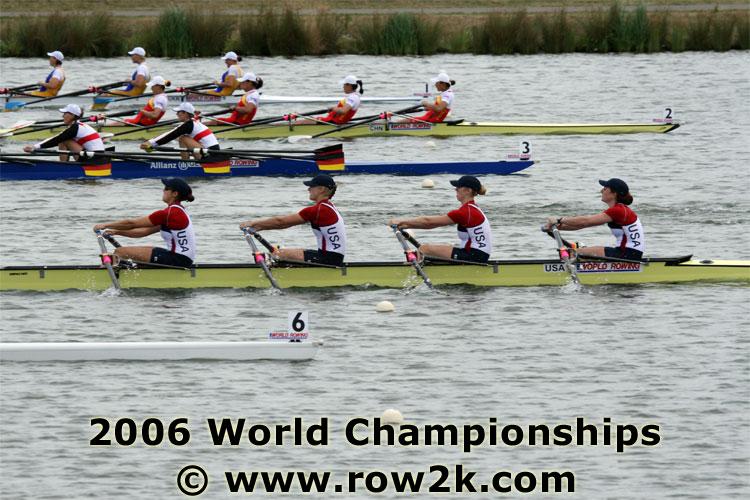 Up until today, the British weather has been inconvenient at worst; today it turned disruptive, as an already compressed slate of racing was cancelled right before the eights reps with fears of lightning and worsening wind conditions. The cancelled races will be run on Thursday, so tomorrow is shaping up to give regatta watchers the most bang for their buck (or Pound, as it were): we'll have reps, semis and C- and D-Finals tomorrow. This also means multiple races for those rowers racing in the C/D semis early in the day; their finals will take place later on the same day, which means a tough turnaround for folks in those races.

Random, off the cuff observations today:

Rowing in the GB tends to be very safety focussed, as all the race officials, stakeboat kids and dock crew wear life vests wherever they work. However, row2k has spotted more than one official wearing a life jacket while driving a golf cart up and down along the racecourse; we're not quite sure what's up with that.

It's good to be in the gravel business; word here is that the gravel and sand dug up when this racecourse was being built was sold (at an eight-figure profit, I'm told) to the construction firms building the brand-new Terminal Five at Heathrow Airport.

Switzerland has three official languages in use in the country: German, Italian and French. A quick listen to the cox of the Swiss M8+ indicates that he's coxing the crew in German; you'd hope that it's the main language for all in the boat, whew.

You could argue that there's no such thing as a comfortable progression at worlds; however, there are probably few racing circumstances more brutal than a single rep with all remaining places in the semi or final at stake in one race. There were a few of these today as events sent one or two crews to the B Finals, or, as was the case in the Light Men's Pair and Light Women's Quad, straight to the trailer.

Sometimes you just have one of those days; row2k watched the coach of the Portugese team cycle along the course following four different reps with Portugese crews in them, bellowing at the top of his lungs. Not one of the four crews advanced, ouch.

It's conventional wisdom that you can't win the race with a strong first 500 alone; that said, we've seen a few historically succesful crews that rage out of the starting blocks with unmistakeable purpose, visibly revving higher than other crews in their race. The NZ W2x, the Evers-Swindell twins are one such crew, as is the Slovenian M2x of Spik/Cop. Both of these crews have been rowing together for some time, which can't but make it easier to burn a little hotter, but it's still immensely impressive to watch.

Heading down towards semis starting on Thursday, US crews are still very much alive. Today again, all 5 US crews in advancement action did what they needed to do to move on to the A/B semis or Finals. For those keeping score at home, of 23 crews, the US now has 22 in the Finals or A/B semis; only the Men's 2x failed to qualify, and was to race today in their C/D semi.

By any measure, this is a top shelf performance for the US team. Just watching the crews in practice, on land, or on the starting pontoon, there really seems to be a vibe among the US folks here; relaxed, fun, yet able to really pound it through. Not a bad place to be at the halfway point of the regatta, or of the quadrennium for that matter.

The race of the day from the US perspective had to be the performance of the US LM2x of Cody Lowry and Dan Urevick-Ackelsberg, who looked to be running in an uncomfortable third place in a two-to-qualify rep until late in the race; the crew stuck to their guns and their raceplan, rattled off the fastest last 1000m of the race and moved into second place with a few hundred meters left to go. The crew now moves on to the A/B/C semis on Friday.

The US Light Men's Four went stroke-for-stroke with the Italians down the course, and also moves on to the A/B semis. The crew looked aggressive and comfortable from where we were watching at about the 750, and looks to be finding their stride at these championships. The Light Four is an incredibly tight field with a small margin of error, but the US crew looks to be in it.

Incidentally, that Italian crew are no slouches; Bruno Mascarenhas and Catello Amarante have been around the block a few times, and Leonardo Pettinari in the three seat doesn't really need an introduction.

The US Women's Quad qualified for the A Final by finishing fourth in their rep, but the crew was far more in command than the final result might indicate. Trailing just the leading Russians for the first 1500 meters, the crew had built up a comfortable cushion on fifth-place Canada and cruised home. The crew will race for the medals on Sunday.

Like their openweight counterparts, the US Lightweight Women's Quad also punched their tickets to the Finals today; the outcome of this one was never in doubt, as Portugal was well off the pace early on, running fifth in a race where only the top four would qualify.

Two more races for lanes today: the US M4+ finished 4th and the US LM4x finished 5th in the "Wednesday Finals" in their events. The real deal is on Sunday.

As row2k closes down our Wednesday round-up early due to the weather call, irony would have it that course conditions outside the Media Centre are near perfect at the moment. Brilliant!