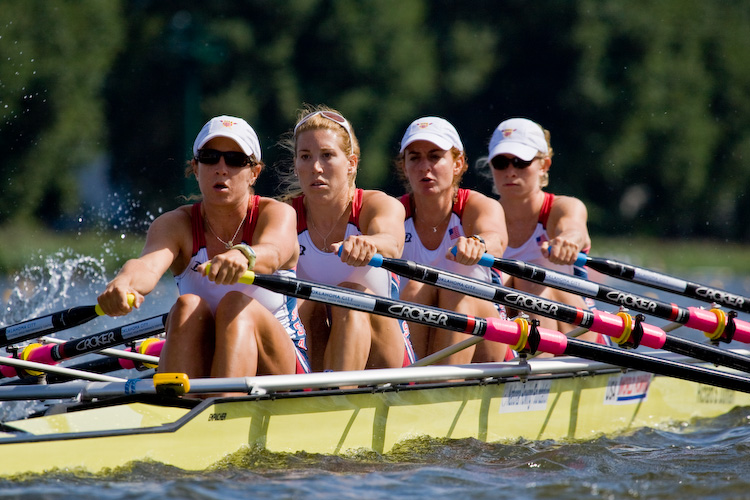 The new-look USA W4x rowed to a win on Monday

The weather these past three days has been gorgeous, near-ideal for rowing/racing: mid-70s, low humidity, perfect late-summer weather. The only quibble today might have been the headwind, which was blowing pretty good by the time the racing ended. The Malta racecourse here in Poznan is fairly wide, so the fairness of lanes isn't an obvious issue, but the wind definitely had the water backing into the starting area, making for some tough conditions in the first 500.

The headwind also played into racing strategy, as it seemed like many of the more experienced crews, especially in the lightweight events, were putting a little more emphasis on building a really big lead in the first 500m or so; that logic wasn't bad considering that it's not as easy to make up a deficit into a big wind, and we didn't see many crews take that gamble and fail to hold on.

On to today's racing: "The United States is putting on a display of power and technique," was the call over the PA during the second heat of the Women's Quad, and indeed, the US W4x did everything right, winning their heat and in doing so, putting themselves directly into one of the middle lanes in Sunday's final. "It was a solid race," said three-seat Sarah Trowbridge. "We just executed our race plan."

The US crew, which has three new athletes in the boat from the crew that finished 2nd in Lucerne, doesn't seem to have missed a beat despite the lineup changes, great stuff.

The US Women's Eight also banished some doubts today, winning their heat and advancing directly to Sunday's final. The Olympic Gold medal from Beijing definitely puts a bullseye on the US crew, but the crew, with 5 returners from the Beijing eight, is handling the pressure more than admirably.

The US Women are rowing in a hull christened the "Jo A. Hannafin, MD" after the longtime USRowing National team doc.

The US Men's Quad had a tough row today, leading their field until near 1500m, before Croatia, the Czech crew and Italy all moved through the USA as the race came down to the line, sending the US to the rep by 3/10s of a second, oof.

The US Men's Eight had a near-similar result, while the race played out in reverse; the crew found themselves in a deep hole in the heat containing the event favorites from Germany, but battled back to produced the fastest second 1000 in their heat even as they finished 5th. This crew is very young, and is likely to gain a little bit of speed and confidence every time it races.

The US Light Men's Quad had the unenviable task of lining up next to the defending World champs from Italy in the heat today, with only one to advance. The Italians, true to form, wasted no time in getting themselves into the lead, leaving the US crew to chase them down the course. The US will next race the rep on Wednesday; with 7 crews in this event, the rep will be a wildly uncomfortable 5 boats racing for the remaining 4 spots in the A-Final, with the 5th place crew from the rep being eliminated from the competition entirely.

The US Women's spares Grace Luczak and Jessie Reel have been doing yeoman service as water carriers to the US crews on the warm-down; the spares have parked themselves on the medals platform and are lobbing water bottles to the crews as they pass after their heats.

The Adaptive events got underway at Poznan today. The adaptive events, which are raced over 1000m, are set up slightly differently this year: in the past, the adaptive racing was run from the 1000m mark to the finish line and the grandstand. This year, on an experimental basis, the adaptive racing will run from the regular starting line to the 1000m mark. Officially, the two main reasons for the change (as explained by FISA) are that starting from the regular starting line and the pontoons makes for a much fairer and lower maintenance start than the previous adaptive starting procedure, which was floating starts, and on windy days at past World Champs has led to some hairy starting line situations.

In addition, the TV coverage set up in Poznan is such that racing the adaptive events from the start to the 1000m mark will allow for much broader coverage of the adaptive events on TV. Of course, the downside of this is that, come finals, the adaptive racing will be run entirely out of view of the grandstands. One could argue that the tradeoff of increased visibility to a broader audience is worth the hit that the experience of the live audience will take, but it definitely seems like an uneasy compromise, at best.

US Adaptive crews in action today, Ron Harvey in the ASM1x and the USA LTA4+ had solid rows and will also race in the reps on Wednesday.

For rowing wonks, FISA is offering a "GPS Replay" of many FISA races, including these Worlds. It's a pretty nifty little app, showing the races in real-time or sped up, and displaying data on meters per second, meters behind the leader, and stroke rating.

It's not one you see that often at Worlds, but two crews ended up with the dreaded "BUW" designation on the results sheet today; BUW is shorthand for "boat under weight," and results in a crew being placed last in their race for the purposes of determining advancement. Neither offending crew lost a qualifying slot as a result, but that's an error you'd just as soon avoid.

Gotta get the work in: row2k spotted a single sculler taking turns down the course with several bungees around his boat, getting some good drag. "I think he disappointed his coach in the last 250 yesterday," said an observer.

Turns out, the little choo-choo train is more than just noisy; when it fires up right behind the athlete area at the finish line, it heaves a nasty belch of smoke right into the enclosure, whew. AT least it seems to only be running after the racing has concluded today.

Nature on the course: in an effort to prevent pigeon poop, the finish tower has some speakers on which they play a loop of birds-of-prey calls, repeating every few minutes, in order to frighten the pigeons away.

Not sure if this is a planned thing, or just the way bus drivers have fun, but our shuttle has not taken the same route to or from the hotel to the course twice. Variety is the spice of life!

Lastly, as promised: the double-bucket! 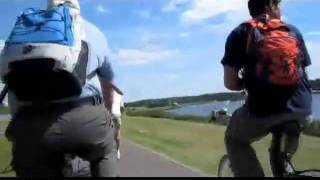 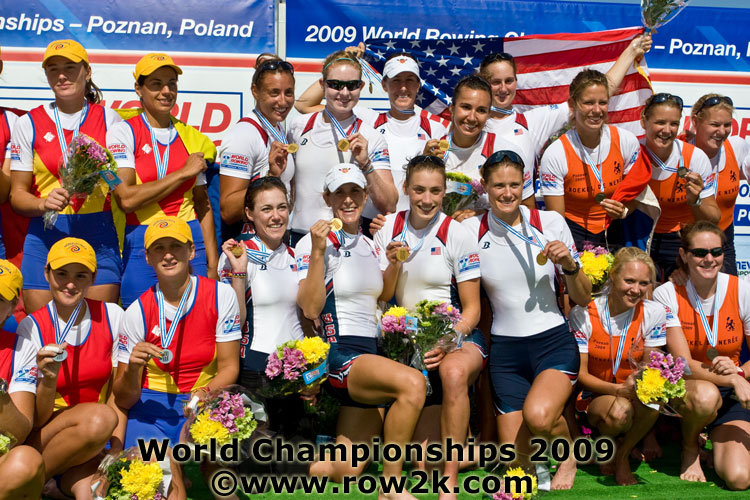 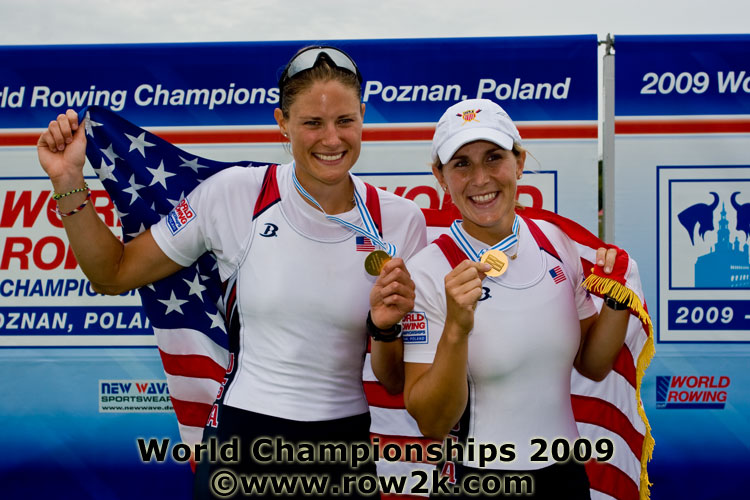 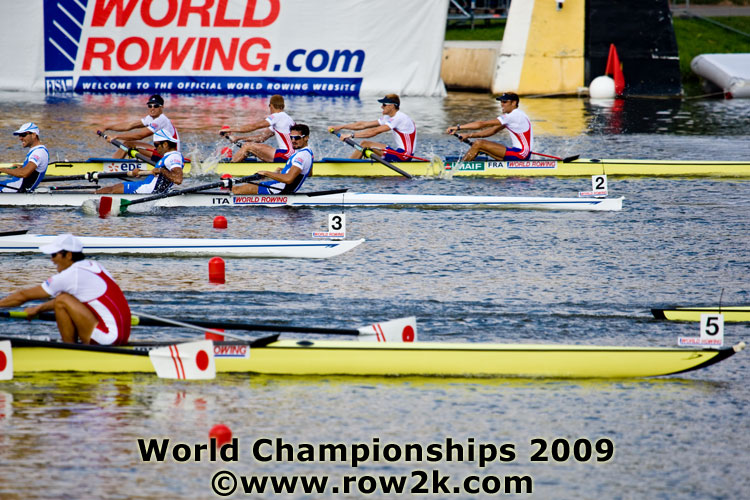 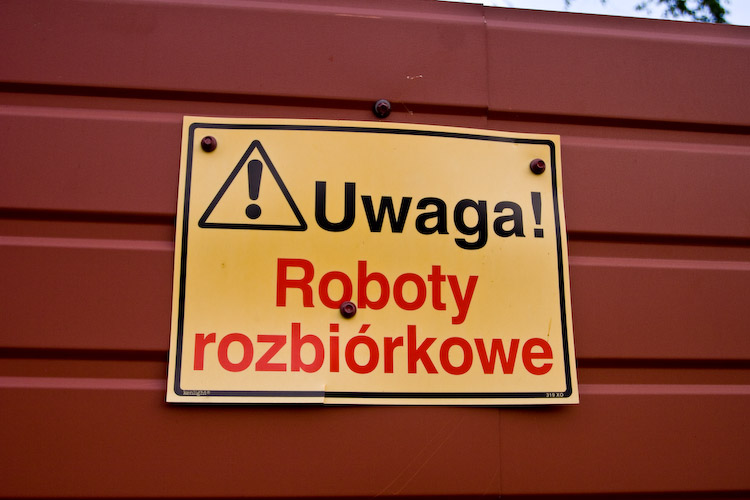