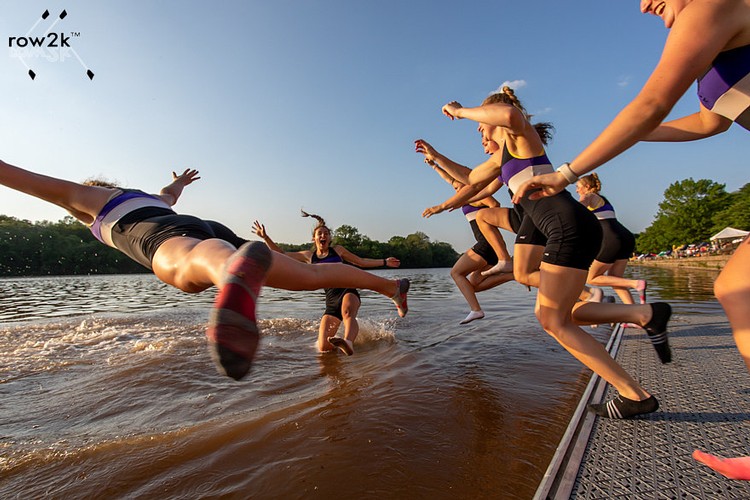 Coxswain toss at sunset for the Mount

Early evening had fallen on the Schuylkill by the time Mount Saint Joseph's pulled onto the medals dock at Stotes as the repeat winners of the Girl's Senior Eight. With the Mount eight's arrival, a Stotesbury Regatta that started Saturday with a six hour delay had managed to pull off every one of its finals and a full slate of semi-final racing across the Senior events.

(The day was not quite over though: since only the Senior 8s came in to get medals at the dock, which helped keep the regatta on a "catch-up" schedule, the line of crews walking over to the Grandstand to collect hardware and get an iconic Stotes Champ photo on the dock stretched halfway to the railroad bridge. The sun dropped below the Columbia Bridge by the time the final group--and the regatta--wrapped up.)

This longest day started with high water, and the debris and fast current which that swept down the Schuylkill River Valley overnight put tremendous pressure on the regatta organizers, who had already lost part of Friday's program when a cell of thunderstorms passed through late on the first day of racing.

Yet, Stotesbury is an event that finds a way. In 2018, Bonnie Mueller and her staff of officials even managed to move the whole event on 36 hours notice to another venue entirely, so—-in the end—-even the lengthy delay to clear the course and let the river flow subside on Saturday was not going to keep the Finals from happening, or the trophies from being given out.

When the races finally did start, at 1 pm, they came down at a pace that left the video announcers nearly breathless, as the officials kept ‘em coming: sending races down every 5 minutes like clockwork, and doing the alignment freestyle, with floating starts, to boot. Even the very occasional restarts that popped into the proceedings were handled with aplomb by the refs--and there was at least one mid-race, debris-clearing run by the safety launches. A few finals came down out of order, but the Stotes folks got every race left on the program in, to include the Regatta's adaptive final: a doubles race won by Cole Hundelt and Kimble Ettelt, from Washington-Liberty High School. 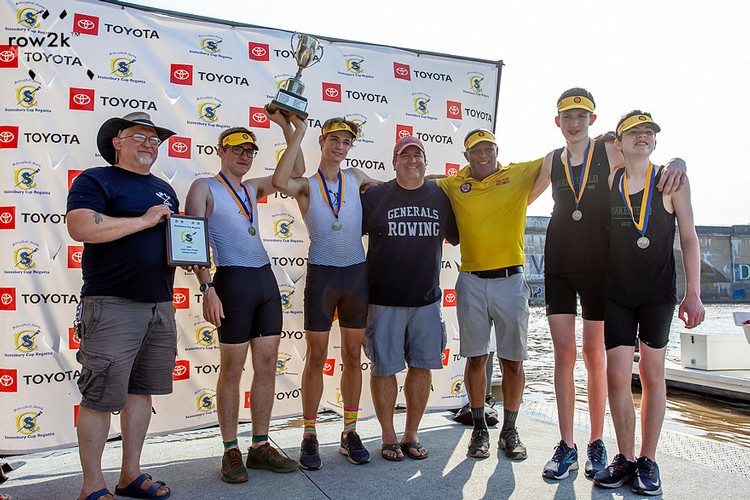 It was a rough morning for the younger athletes, though, as the semis for nearly all the freshmen, lightweight, and junior events--with the exception of the Junior fours--were tabled. Finalists in those events came straight from Friday's Time Trials instead. That is always a possibility, of course, but the lack of time to run the semis as planned still meant that six crews in each of those events who had gone to sleep on Friday dreaming of a magical run in the Semis ultimately had to de-rig their boats and head home without a second race.

As for those straight-to-the-final races, it wound up to be a pretty even split as to whether the time trial winner was actually the fastest crew once they got side-by-side, did a floating start, and had to deal with the increasingly bumpy water towards the end of the day. Eight time trial winners made good, winning their final--to include a Niskayuna sweep of the Boys and Girls Senior Doubles--but 10 of those races were won by "upset" crews so, yep, there's a reason why it's good to run the actual races, when you can.

As mentioned above, the Mount won, in a repeat, but only after a thrilling final where Wilson HS gave brave chase and threw everything they could at the champs. 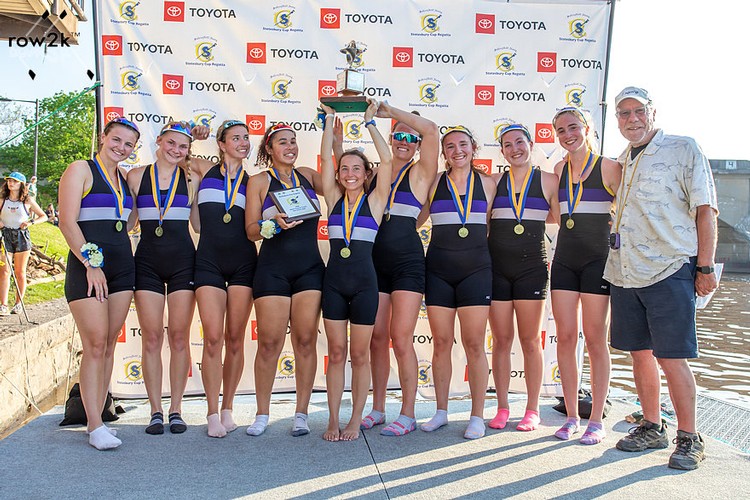 The margin at the finish was just 0.74, and Moorestown, in third, still had contact with both crews. As a final race of a long day, it was worth the wait.

Behind the medalists, the finish order was Whitman, Bethesda-Chevy Chase, and National Cathedral School.

All that hardware from a school of under 500 girls, and The Mount topped the points and tied with St Joe's Prep for total number of medals on the day.

The Boys Senior Eight final--just minutes before on the hurry-up schedule--may have been even better, as Wilson HS reeled in the defending champs and hometown heroes from St. Joe's Prep and take Stotes gold. 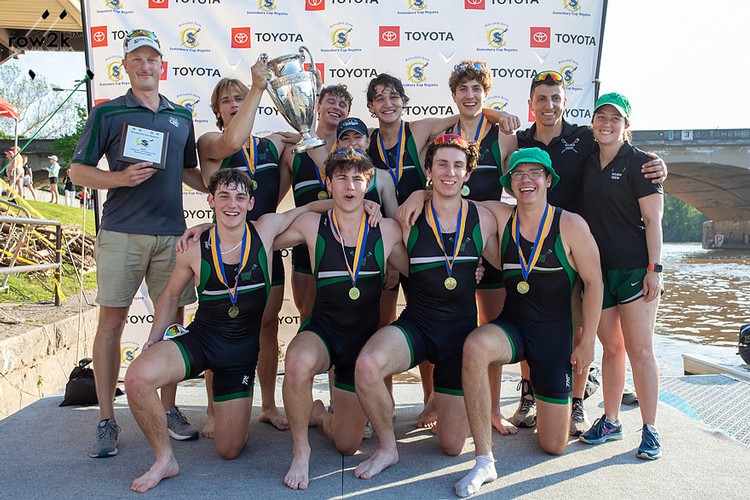 The Wilson crew has been in the mix and hot on the heels of fast crews all season, but it all came together at the Stotes, despite a terribly emotional week for the team.

"The boys were fueled by pure emotion," said Head Coach Joe McMullin afterwards. "Our stroke, Grant Gwadz, lost his mother Wednesday morning right before practice to stomach cancer. He told me his mother would want him to race."

Racing in a boat named for Grant's mom--the Lisa Joy -- Wilson came out of lane 5 to chase the Prep, dropping both Bethesda-Chevy Chase and Gonzaga who had beaten them, narrowly, at the WMIRA Championship two weeks ago. 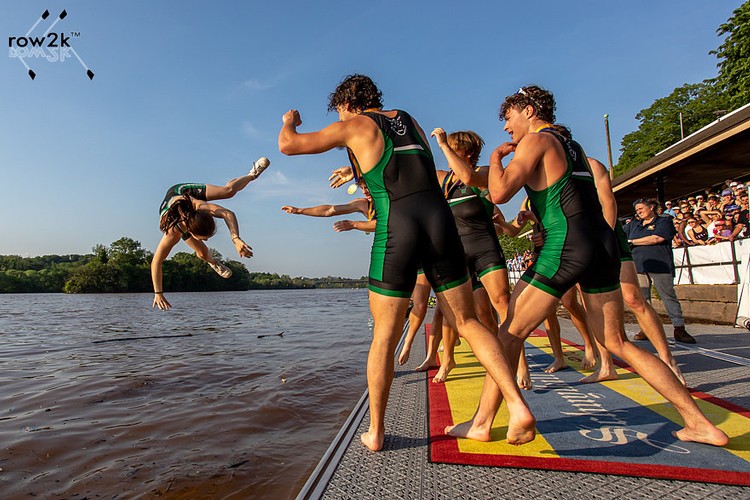 "The crew had a strong time trial Friday," said McMullin, "and got very lucky with a strong semi against local rivals BCC and Saint Albans, barely holding off a strong charge from STA to make the final. The boys came in after the semi determined and focused. They spent some time in ice baths before launching for the final."

"In the Final, the boys had a bit of a rough start going out 5th, but charged through the field and had an incredible sprint to win by .4 seconds, the same margin we lost by to BCC and Gonzaga, respectively, at WMIRA championship."

The Senior Singles races went to a pair of Canadian schoolkids: Cait Whittard and Lucas Maroney. 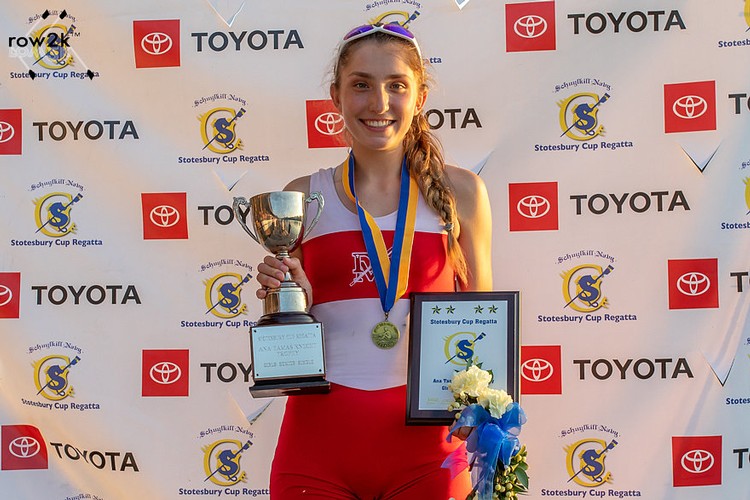 Both had been second in the time trial--Whittard to the 2021 champ Ridgewood's Llian Riedel--but won their respective semi and emerged from the pack by handling the water well and pushing away from the field.

"After not being back since 2019 due to Covid, it was honour to come and race at such a respected event," said Whittard. "Coming so close to winning in the junior coxed four 3 years ago, it was a redeeming feeling to come back and capture gold this year." 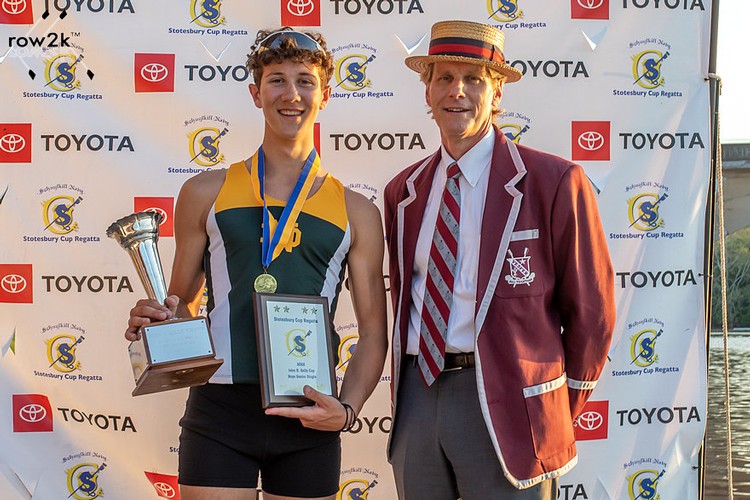 "It was a pleasure to compete in Stotesbury Regatta Cup and win the gold medal," said Maroney. "The competition was great and the atmosphere was very welcoming and friendly. I look forward to coming back next year and trying my best to defend the title."

It was the first Stotes singles win for them both, in a year when Canadian schools could finally get back across the border to compete as pandemic restrictions eased. 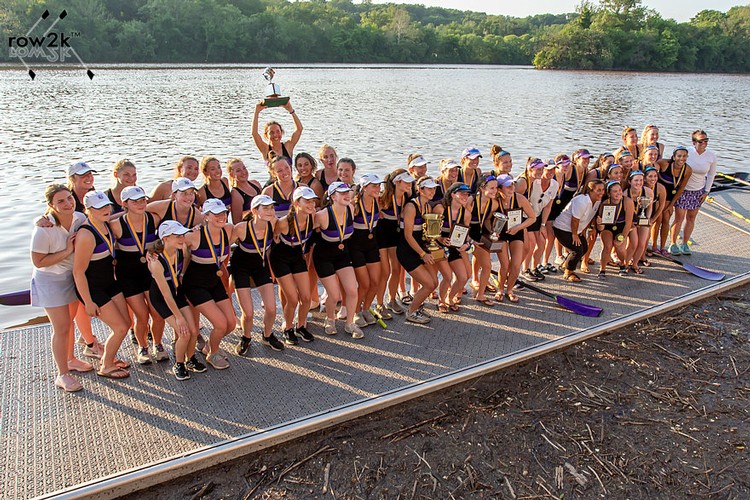 The Mount, en masse, in the dying light
back to top