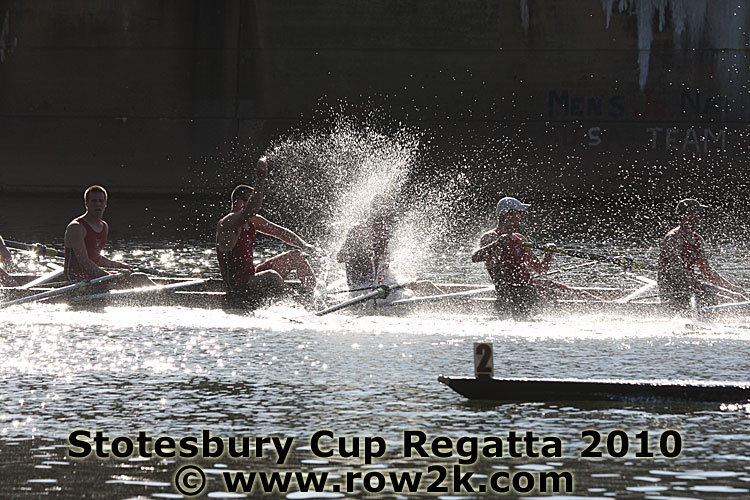 How is it that the Stotesbury Cup Regatta executes a perfect slam dunk year after year, even as the number of rowers has grown to well over 5500? It ran so smootly in this 2010 edition, down to the intimate awards ceremonies where rowers often meet the man or woman behind the trophy; that it was as if the thousands of athletes, family members and supporters signed a contract to play nice as they passed the barricades at either side of Kelly Drive. Even some celebrities showed up - on Friday, Vice President Joe Biden came out to watch his granddaughter race; and on Saturday Mayor Nutter was on the dock giving out medals and trophies, along with Edward Stotesbury, the great-great-grandson of Edward Stotesbury himself, who attended the regatta to hand out the V8 trophies.

The $300,000 renovation on the grandstand was evident as well; the finish tower is completely new, the grandstands have a new roof and seats, and the pavement has been patched. The dock has done its time, and Mayor Nutter noticed the sinking sections last week during the Dad Vails and put plans in motion to get them repaired. Nutter came back nonetheless, giving out awards from Senior Boys Four onward until the day concluded.

And athletes brought their best, to be sure. For many this was the last regatta before a two-week break (or longer) to re-group for nationals. A large majority of the crews here will be loading their trailer for Memorial Day weekend to go to Saratoga Springs, NY, for the Scholastic (SRAA) National Regatta. Many will also continue training until June 11-13 for the US Rowing Youth Nationals in Cincinnati. The Stotesbury gives coaches and rowers a view of many of the finest and fastest crews in the country (and beyond), if they haven't already met some of these folks at smaller regattas like Philly City Championships, where the winners of both the Varsity Eights already raced and won two weeks ago.

Finals kicked off Saturday while a tame wind blew; the water stirred like it was last week for the Dad Vails. All in all the race conditions were fair and coaches weren't grumbling about lanes.

Early finals featured freshmen boats, and Saratoga Rowing Association, who came only with these youngsters, started a tri-color medal run with their Freshman Girls Eight winning a gold. Three-seat had to suffer through this one, though--as they passed the finish line she was rowing without her slide. Coach Chris Chase says she is a fill-in for an injured rower, and a mighty mite at only about 100 pounds. SRA's Freshman Girls Quad earned a silver behind Ursaline, and the Freshman Boys Quad was bronze to Montclair and Haverford.

In sculling races, it seemed as though schools from the Main Line of Philadelphia were present at every medal ceremony save the men's singles, extending the length of the burbs from Radnor and Malvern to Bryn Mawr (Shipley), and the suburban neighbors in Conestoga (Berwyn) and Episcopal Academy (Newtown Square). Malvern Prep, however, made Coach Craig Hoffman the winningest sculling coach of the regatta, with his Lightweight Double, Junior Quad and Senior Quad all taking top honors.

"It's all because of these guys here," says Hoffman, motioning to a supporting coaching staff of Sam Cunningham, Pat Quinn, Joe Smart and Justin Teti, most of whom are Malvern Prep alums. He also gave credit to Art Post, who coached the light double of Bill Doughty and Dan Schwartz. "We have a small squad of about 13, and they are all really important contributors to the team," he adds, sharing all the glory. When asked about how they are succeed so consistently, he considers the ability to react to the other crews' moves one of the most important pieces of the puzzle. "At this level of competition, it is all about a good push to the finish line," he says.

On the girls side, the senior girls 2x was won by the twin Pikus sisters from Morristown, and the girls quad was won by a smooth-rowing Episcopal Academy crew including bowseat Bridget Gribben, who has not lost a race on the Schuylkill for over two years.

In lightweight racing, the big eights were a preview of how things would happen later in they day, with girls powerhouse Mount St. Joseph's from Flourtown, PA taking their first Eight victory of the finals. Coach Megan Kennedy, who started this team 11 years ago with Mike McKenna, feels the tradition of winning is born from their environment. "I can't take credit for these girls... we start with Mount girls, who are super-achieving, super-academically-challenged at the school, and when they decide they are going to do something, whatever it is, they are going to be the best at it." Coach Mike McKenna agreed when we spoke with him later: "If there was a domino team they'd win at dominos." "It is a school full of Type-A's," adds Kennedy, "but they really come together."

The lightweights started the gold medal count for the Mount. In a subsequent race, the 2V delivered a sprint that took them through TC William to win by a razor's edge - it became a featured photo finish and was posted on the board behind the stands. As the girls teams all floated under the bridge after this race, no one knew who won. Folks from the sidelines were yelling at the Mount girls that they won, but they still weren't sure. When an official of the race gave them the word, tho, screaming could be heard from under the bridge, and Mount lined up for the awards dock. "That's good racing," summed up assistant coach Stuart Chase of the Mount. Three seat in that boat, Rebecca Duffin, has won four Stotesbury golds while at the Mount, as a freshman in the Eight, as a sophomore in the 2V, as a junior in the Junior Eight, and now as a senior in the 2V. There were eight seniors in the 2V.

In the lightweight men, cross-town boys St. Joseph's Prep started their own dominance of the big boats with a win in the Eight. The second place crew of EL Crossley from Canada was at their stern as they passed the finish line, and a powerful surge by Woodbridge put them in third.

Of note in the fours category was a small contingent of rowers from Egg Harbor Township, led by Zachary Palombo. His team focuses on fours, he suggests, not by design so much as necessity. He has a small team of 23, four of whom were strong lightweights, so he made the other boats fours as well. The strategy worked well for the team. The lightweight four won while one of the smallest but most enthusiastic group of supporters in the stands cheered loudly. The coxswain from the lightweight boat, 75-pound freshman AJ Ribbel, wins the coxswain celebration award with his reaction after the victory. It could be he was thinking about his life before crew. AJ was recruited by a senior rower while he was sitting alone at the lunchroom. The kid doesn't sit alone any more.

Palombo's Egg Harbor team, who practice in the Ventnor Back Bay, went on to win the Senior Four, and the female half of the team won the Senior Girls Four. The boat the boys rowed in was named after Coach Palombo. "The parents did that," he says. Palombo says this team did not have a tradition of winning as late as four years ago. When he started and the team started winning, the parents dug deep, fund-raised and came up with a four a year for the athletes. The team won the Junior Four and the Lightweight Four last year at Stotes.

Jim Glavin's St. Joseph Prep team had already won in the lightweight category when Galvin and his posse of assistant coaches clustered near the finish line for the Varsity 8. It wasn't long before the roar of a crowd from this hometown team whose own dock is about halfway down the course could be heard. The second big win of the day did not come easily, but the hometown part meant a lot to the team. "At St Joe's we have this tradition of 'men for other men', so we are trying to give back, be good rowers but also good people off the water." Regardless of how they carry on the Jesuit tradition, they deliver a good sprint as well. This team will conclude their season in Saratoga in two weeks, unless they decide the go to another Henley Royal Regatta in the UK as they did in 2008 with Coach Bill Lamb. Asst Coach Al Lawn, who is the only carry-over from the Lamb-to-Glavin transition at SJP, was holding the Stotebury Cup the team won with his eyes fixed on the entries engraved on the cup. "1944, " he observed, "that's the one my dad won."

While the SJP coaching staff started their walk towards the boathouse, the already three-time victors on the day, Mount St. Josephs, were putting the finishing touches on their dominance of the women's eights categories, but not doing so easily in the Varsity Eight.

"Yea, they were very pressed, there are some fast crews" said Mike McKenna after racing, "Merion has been back and forth with us this year, and Radnor's been right there too," says McKenna. "But they keep their composure." Early in the season McKenna said that the girls would get a little racy as they entered the sprint. "We have an experienced crew, and we've learned to stay within their base rate until they needed to, then you have it left when you need it."

The sun set soon after Mount St. Joe's threw their coxswain in (and a rower with her), on a thoroughly enjoyable day of racing. On the docks during the awards, shirts were handed out with a giant "X" on the back. When asked about it, one girl said "it's a variable, like our crew." Another provides another reason for the X: it stands for 10, for the senior-laden crew.

The regatta was not completely without contention: the senior quad from EL Crossley rowed with an exhibition status only today after a bumpy controversy earlier in the week concerning the crew's eligibility. Crossley coaches and administrators, apparently along with many other Ontario programs, seem to have long interpreted the Stotesbury four-year eligibility rule to mean four years competing at the Stotesbury, not four years competing at the high school level. The Crossley crew had a number of fifth-year students in the crew, who had rowed for five full seasons, which would render them ineligible at the regatta. When the conflict was first brought to the attention of Stotesbury officials, the crew was going to be allowed to compete this year, as they had already made travel arrangements, paid for hotels, etc., and then next year the rule would be made more clear. Objections from other coaches in the event, however, ultimatley inspired the decision to allow EL Crossley to compete, but not for the trophy. The Crossley crew crossed the line first, and was awarded exhibition medals, but the trophy and gold medals went finally to Malvern.

Thankfully all at row2k survived the day in the trenches, but almost not on the train tracks above the finish where the photographer went up and almost got trapped on the bridge by a local freight train, giving new meaning to commitment to a shot.