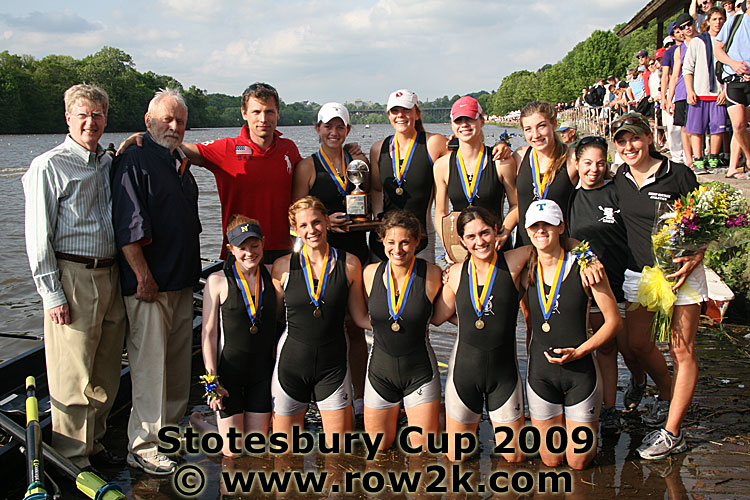 There is something charmed about the Stotesbury Cup; they bring in 5000 rowers, but somehow everything goes off preternaturally smoothly - the races go off on time, the medals ceremonies are memorable, spirits are high despite hour upon hour of races on 10-minute centers, storms seem to steer clear of the racecourse, the racing can be phenomenal, and the whole experience is fun, even when you are working your tail off. Thunderclouds looked about ready to threaten the racing, and seemed to steer clear of the river once they realized the Stotes was on.

And three was the charm for the Bishop Eustace senior eight, who won the girls varsity eight for the third year running (Mount St. Joseph won in 2005 and 2006). Coach Danielle Ponzio attributed the crew's sustained success to "tenaciousness, work ethic, and a willingness to respond to challenges and direction to a degree that you do not always find in high school students." The crew wasn't without inspiration as well; the crew dedicated their race to their coxswain Kerry Walsh, who has been fighting leukemia for some time. Walsh shared some of the details of her fight with the crew at the team dinner this past week; subsequently Ponzio said "we thought that undoubtedly she was the strongest person out on the water today, anywhere, from all the crews to the officials to the coaches? everyone. We rowed the race for her, because we felt she truly deserved a gold medal." The crew made it unequivocal by the finish line, winning by open water over silver medalist Ocean City, with Mount St Joseph in third.

Stroke seat Nikki Bourassa, who has a complete collection of the special handcrafted necklaces given to the winners each year by sculptor Robert Engemann, said that "I have several of the necklaces, but it's amazing, to get one in my senior year, nothing compares."

The boys eight was won with a big push down the stretch by EL Crossley, a scrappy bunch of midweight sized oarsmen who took out a strong field in a firm headwind. The program sometimes focuses on the smaller boats, but this year the crew took a shot at the big game, and came up winners.

"We knew we were taking a risk, but these are our top eight guys who are tough, tough kids, and had a good year of training, so they wanted to do it," said coach Darcy Usborne.

"This is one of the great high school regattas," added co-coach John Ruscitti. "You know you are racing the best. We chatted with the guys about it, and they wanted to race the best." Despite the crew's lack of size, Ruscitti thinks the headwind may have helped his crew. "We're used to racing 2000 meters," he said, "and although a headwind wouldn't be our first choice for racing conditions, in the end it might have given them time to claw back into the field." The crew got themselves into good position with 20 to go, and then just blew it out, inching ahead of Gonzaga by less than a second. For their part, the Gonzaga guys had a great time on the medals dock, a great thing to see after coming so close in a great boatrace.

The boy's senior four went to Bonner, another slightly undersized group that handled the conditions exceptionally well, one of the only crews to win from Lane 1. "They're not the strongest crew out there, but they row well, and I think they handled the conditions really well down the course," said coach Dave Krmpotich. We talked about the conditions before we went out, and they were really able to do the job," he said. The crew's coxswain is the younger brother of US Olympic coxswain Marcus McElhenney; "it didn't hurt us having the little brother of an Olympic coxswain steering the boat, either," Krmpotich said.

In the girls senior four, the Peddie School also pulled off a fourpeat, the third in a row for coach Barb Kirch, as well as for stroke Shelley Pearson, who also sat 2-seat in the US junior four last year. Behind Pearson are three second year rowers (two sophomores, and one senior who started rowing last year). Can they keep their streak going? "The bow three are doing a really great job, but I do think we're going to have to find another stroke," Kirch said, already missing Pearson before the crew even shoved off the dock. All coaches know how that feels; it's phenomenal to see kids finishing up their time with you on top, but just as tough to see them go.

Nicole Bielawski of the Friends Academy won the girls senior single rowing away, and has been rowing the single with her eye on a spot in the single on the junior team this summer. With only 70 students per grade in the school, Bielawski outdistanced the rest of the girls squad by 30 seconds or more on the erg. Coach Jason Moskowitz said he gave Bielawski the choice of which boat she wanted to row this spring. "At the end of the winter, I told her that she had earned it, so she could decide which boat she wanted to row. She really wanted to row the single, so we did it."

The boys single was almost heart-breaking to watch; a day after having boat his boat and his oars stolen from the boat area after the time trial (contact row2k if you have any information on this), Alex Taafe of Pine View looked to be winning his final when he caught a boat-stopping crab, and then another, and another, until he was forced to limp across the line still in third place. As tough as it was to watch, equally impressive was the sprint put on by winner Zac Fry of Notre Dame, woah; I think it is safe to say he didn't need a crab across the river to make a race out of this one, and even to win it.

The boys senior quad experienced some misadventure when the Malvern crew broke some equipment a short distance into the event, and the race was stopped. The crew rowed over to the Canoe Club for repairs, and the race was restarted later, after both the singles. The crew from Malvern made their program's third trip to the trophy platform today to make it a sweep of the quads today, as they also won the freshman and junior quads earlier in the day. "I was really proud with how they handled it" said coach Craig Hoffman. "You never expect to be able to win after something like that." Hoffman was most proud that the three quads did not let some of their early season losses stall their progress. "The young guys really came together," he said. "The other teams are really terrific boats, and we're very fortunate to win today. We have no illusions that it isn't going to get tougher over the next few weeks at SRA's and Cincinnati.

Those are the stories we could glean from the senior events; here are some things we picked up during our time on


The boy's junior four was Egg Harbor Township's first boy's gold medal (EHT won the girls light four last year), but it wasn't their last; a couple hours later, the boy's lightweight four won gold as well. The lights were undefeated coming into the race, but the junior four had lost to Bishop Eustace a couple weeks ago. Coaches Zach Palombo and Bob Kerstetter told the crew that if they wanted to be polishing the trophy in Philadelphia, they were going to have to come together - and it clearly worked. "We're really happy to be able to race these teams," Palombo said. "The Eustace kids are really a stand-up class act, and we're honored to be racing kids like that."

There were a bunch of firsts today, including the boys and girls frosh fours, which were won by Malvern and Baldwin, respectively.

Additionally, the Phyllis Graham trophy, named for Clete Graham's mother, who passed away unexpectedly this winter, was awarded for the first time this year to the winner of the girls light four. In each of the fifteen years Graham has been running the show on the awards dock at Stotes, Mrs. Graham has been assisting the effort a few feet away in the trophy area. Clete and his niece awarded the trophy themselves to winner Montclair in an emotional and touching ceremony.

The Moorestown boys won their first boys eight win today. Coach John Lloyd said the win was the result of three years of dedication to expanding the program to be able to compete with the big programs in the area. The team crew from 53 kids to over 90 kids, and the coaching staff went from four to nine during the time as a club program supported primarily by the athletes and their parents.

The Winter Park second varsity eight may have had the largest weight spread of any crew in the regatta - 85 lbs from heaviest to lightest.

And finally, a touch of the absurd: the coxswain of the Prep boy's lightweight four arrived at the medals dock eating a hamburger.

See you next year at one of the most fun regattas around. 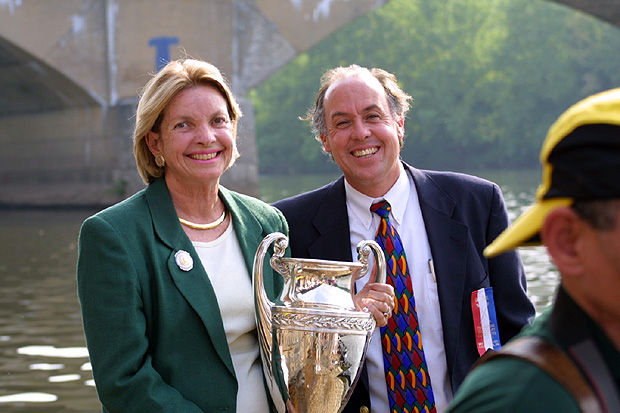 Facts and Figures about The Stotesbury Cup Regatta
Get our Newsletter!
Enter your email address to receive our updates!