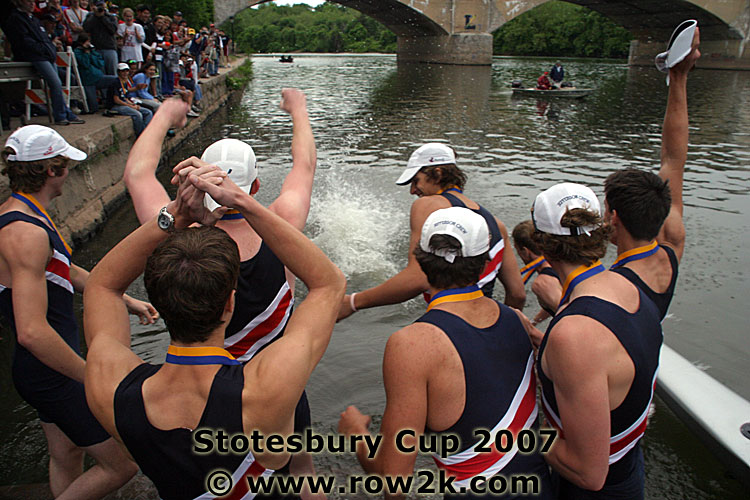 One repeat winner and one first-time winner took top eights championships at the 81st running of the Stotesbury Cup on Saturday as Thomas Jefferson High School repeated in the boy's eight with a frontloaded race plan over Winter Park and St. Joseph's Prep, and Bishop Eustace won their first ever medal in the regatta and the event by taking the girls eight, followed by E.L.Crossley and Oakcrest.

Bishop Eustace would have been hard-pressed to have any kind of track record at the long-running Stotesbury; the Cooper River-based crew has been in existence only for the past six years, and has been a varsity sport at the school for only two years. Bishop Eustace coach Robert Seiger seemed to appreciate what his crew had done.

"It is a very fast league, and almost any of those crews could have won today, " Seiger said after the race. "We were just lucky that this was our day."

The crew's plan was to be in the hunt two-thirds of the way through the race, and then see what they could do. "We wanted to be connected to the field with 500 to go," he said; "they were able to do that, and then all the hard work they did this season got them to the line first."

The Thomas Jefferson crew was apparently seat-racing on the Schuylkill the day before the regatta; they were leaving nothing to chance. By the time of the final, the combination had undeniable speed, but their ability to close the deal was put to the test by Winter Park.

""We had been worried about Winter Park; they had posted fast times all weekend, right from the first time trials, and we wanted to get ahead from the start and row the race from a commanding position," TJ coach Jim Granger said after the race. "The crew had a really nice start and got out to open water by about 800 meters gone, and then Winter Park got through the Prep and started coming back on us. The guys responded well to hold on to the lead; I think it was down to about five seats at the finish line." Rowing in a bit of a tailwind, TJ brought the race home in 4:18.8 for their second Stotesbury Cup in two years. Winter Park took silver, with St. Joe's Prep in third.

After the race and medal presentation, a lot of whispering and chaos on the dock concluded with the TJ five-man asking a member of the girl's team for a date at the prom from the medals dock ? complete with a leap up into the grandstand for a peck. Hey, you may think it sounds corny, but row2k says when you're holding a good hand, you had best play it. She was already wearing a medal, so should be a winning couple ? ba dum bum. 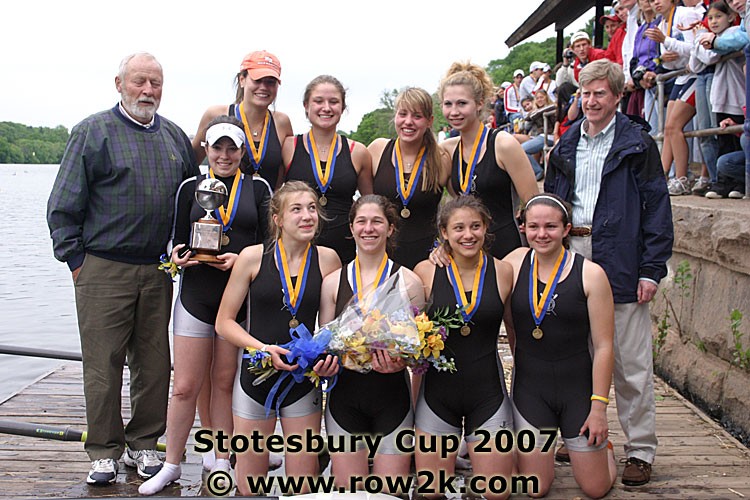 Bishop Eustace girls eight
More from the medals dock:
The Mount St. Joseph's girls light eight has now four-peated in the event; with only three members of last year's crew returning, the program is a bit of a juggernaut at producing light eights. Head coach Mike McKenna attributes the success to a "big novice program": "We have most of the big kids in the frosh eight, and all the 'weenies' row in the novice program," he said with a smile. "Some of this year's crew came up from that group and fit right in." The farm system seems to work very well: "The bow seat of the eight was in our second novice boat last year, and she has the best erg in the boat!" he said.

St. Joe's Prep took the boy's light eight to continue an undefeated season. The crew raced clear of the field late in the race; Prep coach Bill Lamb seemed happy not to be in the middle of the brawl for medals. "It has been like that all year in this event, with LaSalle and St. Augustine fighting it out back and forth for second, but we've been able to be about a length ahead of them; it was great to be able to do the same thing today."

In the light men's four, Gov. Simcoe came back strong after tripping up a bit in the 2006 Stotesbury. "We won the time trial by five seconds last year, but ultimately failed to make the final, so the crew was a little hungry this year," Simcoe coach Tim Tope said of his St. Catharine's-based light four. "The idea was to get through the field and then just hang on, and they just barely did it." You can say that again; the crew edged Lower Merion by 0.18 seconds. "We'll be back for the American schoolboys, so I'd guess a bunch of these same crews will do it all again!" Tope said he hoped some US crews would consider attending the Canadian schoolboys; as an aside, I did it as a senior in high school, and it was a great experience.

In the boy's senior quad, Malvern put themselves back in the winner's circle after a year away in 06. "We have two kids back from last year, and starting back in September upped the level of work we were doing, and worked very hard to improve the level of our sculling," said Malvern coach Craig Hoffman. "You know that if your sculling is not at a high enough quality, you are going to come up a little short, so we tried to fix this. No one wants to come up a little short."

The day saw several new-ish squads making trips to the medals docks ? a large number of them from across the Delaware in high school rowing-crazed New Jersey, including crews from Oakcrest, Ocean City, and of course Bishop Eustace. Ocean City coach Jeff Garbutt saw his girls four place second to Hightstown-based Peddie in the program's best finish at Stotes to date; they placed third with a light eight a couple years ago. "These are fast crews, and we're trying to close the gap on them," Garbutt said. "We're getting there!"

Parting color commentary: US team member Jason Read was on the dock presenting medals and congratulating crews; his orange Operacion Especial shirt matched very well with several medalists, especially the Winter Park crews; check it out in the row2k galleries.