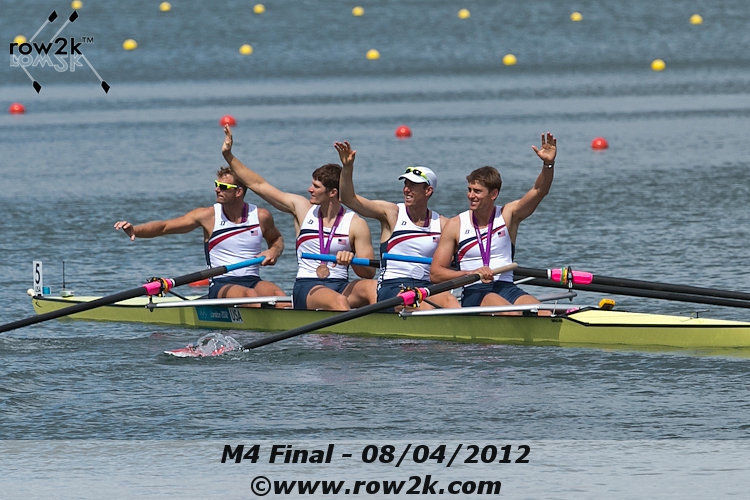 Let's not bury the lead (or lede, if you must): Great Britain won the men's four, really the only men's sweep event that was truly wide open this year, and the one into which the host country had poured all their marbles. GB did it with a courageous but unexpectedly composed race, given how much buildup there has been, how closely the rowing world and indeed the entire country was watching them, and how real the threat from the Aussies was. As much as sometimes the fawning British press's attitude toward the four can be hard to take, it's not their fault, and in recent weeks the cracks in the armor that had been revealed this summer made them almost lovable, so in the end it was good to see them take it, and without much drama.

That said, it would be just as easy to pull for Drew Ginn, who nearly paddled his way to gold in the last Olympics after taking four days off before the final, and who has had a couple serious back surgeries since; Ginn will almost inevitably retire before the next Olympics. It is always great to see a truly great champion go out on top – and Ginn is certainly a great champion, having been involved in… well, let's just say that every crew he sat in, no matter who else was in there, has been fast. And today, well, had they been a lane over, who knows.

But let me cut away to my own nation's four, which, despite having won both their heat and semi, was mostly expected to be "the best of the rest;" the official Daily Preview (which I saw only after the racing) darn near said as much. But that's not how it played out; in fact, for a good stretch in the third 500, I would say that the US was a real threat to the leaders, and was setting the pace for everyone in the race; when the other two crews started watching each other, here came the US boat right up between them, and the three left everyone else behind. With absolutely no pedigree as a crew, no hype, and hell, not even an actual race as a crew before the Olympic heats, this was a serious accomplishment. Not since the 90s has a US crew medalled in this event, tho they came close a couple times, and this crew did it with some charm.

One quick note: had the US men's eight been only 0.3 seconds faster, or the women's pair 0.2 to the good, this would have been a blockbuster Olympics for the US team; I haven't checked the medals tables that closely just yet, but I believe the US performance was about the same as the Germans. [numbers-wise it was: three medals apiece for GER and USA; GER 2 men's gold and a women's silver, USA 1 women's gold, 1 men's bronze, 1 women's bronze]

Another quick note: if for no other reason, the new four-day finals schedule was beneficial in that it let a lot of other great crews row great races and get some credit for it – had everything been on the last couple days, it is possible that the men's four headline could have sucked all the oxygen out of the entire rowing regatta, and crews like the Kiwi pair, the GB women's pair and double, the South African light men's four, and other similar crews would have been buried inside the sports section.

The men's four was just the first in a string of three medals for Great Britain; Sophie Hosking and Katherine Copeland won the women's double, followed by China and Greece; and GB was a really good, driving crew, but check out the way they hold their oars in the galleries; the traditionalists and technique police should have a field day with that one, whew. A supporter threw a flag out to the Greek stroke, but they didn't have as good an arm as the US flag thrower, and it ended up in the water; she stretched her long arms out across the water and snagged it. It was a good thing she got it – it was a special flag, with autographs from previous world championships.

Next the GB light men's double won silver behind Denmark, whose sprint stole the race right from the paws of the Brit double. I have seen Rasmus Quist wind it a couple times over the years, and when I saw the Danes about a length behind with 200 to go, and muttered just barely audibly "watch out…" the photographers around me said, "What? What? What happened?", but by then the Danish sprint was already underway, and it was a devastating one.

About 15 minutes previously, that LM2x final was actually stopped and restarted after the British double ended up in the buoys, and stopped rowing due to an equipment problem. The start was replayed quite a bit on the telly, and the twitterverse went crazy, as apparently the whole episode looked like the old "we had a bad start so stop rowing and fiddle with your seat and claim equipment damage" trick. I haven't seen it, so am indulging some hearsay, but you can check it out for yourself – and of course only the British double really knows for sure.

Anyway, Quist did a nice rowing hack when he tied the Danish flag to his oar – instant flagpole for the row-by at the grandstands.

In the women's single, Mirka Knapkova gave a masterful performance in lane 6, finally winning an Olympic medal, and gold at that, after placing in the back of the A final in the last couple Olympics. Dane Fie Udby Ericksen took silver, and Australian Kim Crow placed third to earn her second Olympic medal in two days.

What a summer Crow has had: named to the Aussie double, but then her partner got injured, so Crow went and rowed the single at the final Olympic qualifier, as Australia did not have a single entry for this Olympics, and she needed an option in case the double did not work out. In the end she decided to do them both, with stunning results (singlehandedly equalling the Aussie men's medal total), and brought one of the quickest and biggest smiles in the entire rowing ranks to the medal stand twice in two days for the paps to snap.

This was the first regatta I can remember since row2k started in which Ekaterina Karsten was not a serious threat and factor; she has been rowing all week with a serious rib injury, and just could not put in her usual effort.

Also in the Women's single, Gevvie Stone capped her regatta with a madly focused effort that won her the B final; her time would have won the whole regatta, and although conditions definitely changed after the storm went through and the sun (and headwind) came back out in the hour and half that passed before the A final came down the course, still, that's a pretty good way to go out.

The US light women's double seemed to have a bit of a snakebitten row in their B final; racing in third and fourth all the way down the course, and only 0.3 off second at the halfway point, somewhere in the last 500 they just dropped out of the hunt. I didn't see exactly what happened, but what looked like a solid bid for a top spot in the B final didn't quite last the course.

The morning started off with a hard rain for the first hour of racing; A fair amount of water came down, such that there were crews squeegeeing water off the medals docks so no one wiped out. I sat out in it along with all the spectators, taking photos of the lower finals (as a result I don't have quite as much color commentary, as my note-taking methods were all washed out – neither notepads nor iPhones do too well in a hard rain). There is really no cover at the course, but somehow a lot of British folks seemed to have umbrellas – uncanny. Best/worst moment of the wet morning: when the announcer said "… and across from you is the press grandstand, which is also uncovered, so all the media are getting wet, just like us." The crowd cheered wildly, ha! Hey, I'm just a rowing journalist, it's not like I tap your phone calls.

At the day's close, the Aussies were the last to leave the Heineken zone at the course (with competition from the Danes), with Drew Ginn's kids engaging in a full tussle over who would get to wear his silver medal while they ran around, put their toes in the water, and generally did kids stuff that doesn't usually get done with a silver medal; young Jasper was on the ropes in the battle, but quickly and suddenly he had the thing around his neck, and it didn't leave for a long time; well played.

When they finally left the course, the Aussies had a good place to go, as when I got back to our hotel they were celebrating and singing in the breakfast hall. Meanwhile back at the course, the canoe kayak people had moved in almost completely – by the time I left the course, every single rowing boatrack had disappeared, new mixed zones had been constructed, warmup area buoys had been pulled, and the racecourse lane lines had already been adjusted to accommodate the different lane widths. And so the ends the rowing, but the Games go on; although I have a ton more stuff to share in the next couple weeks, including interview transcriptions and more, but this completes our live coverage of the racing; I hope you have enjoyed our coverage!!