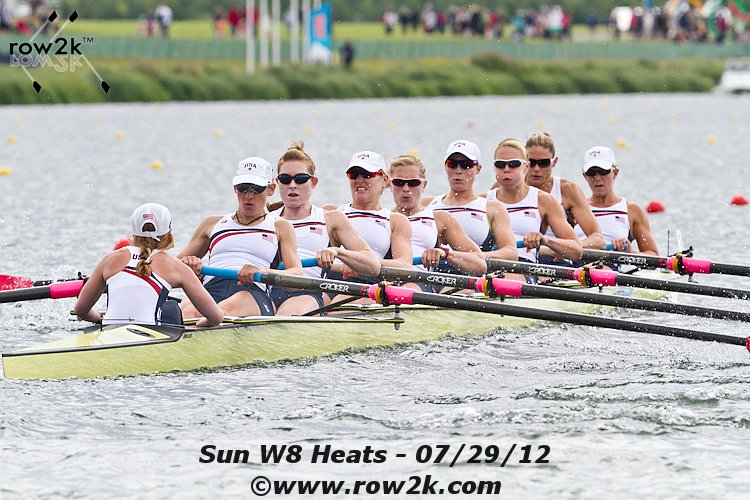 USA W8+ off to a fast start

Day two of three days of heats ended with a race against the clock between the US and Canadian women's eights in separate heats; the US crew had the easier race of it, so the crew wasn't pushed, but the Canadians had the better time. You can argue over whether comparing times is valid, but coupled with the photo finish showdown the two crews had at the World Cup back in May, it certainly keeps things interesting for athletes and spectators alike.

As the last crews in the women's eight went under the bridge onto the course, the sheep in the neighboring field started baa-ing extremely loudly - either they were cheering on the crews, or were happy to see the racing end, not sure.

Light men's double rivals GB and NZ were side by side in the heat, and the fact that the Brits took this one is made all the more impressive by some serious steering problems at the start; they were definitely not straight in the starting block, and spent maybe 200 meters or more getting themselves in the middle of the lane, oof.

Conditions were extremely variable today, ranging from sunny and slightly tailwind-ish to drizzling and definitely cross-headwind-ish for the last three races. During the second light women's double race, a dramatic lightning bolt filled the sky, followed by a strong rumble of thunder; the storm was fairly well to the south of the course, tho, and racing continued apace. About an hour after the end of racing, the course was directly in the path of the storm, and we got a full drenching. A half hour later, the sun was out, highlighting dark clouds for the few of us remaining behind; British weather does have its charms.

One odd thing that occurred today that did not seem to be an issue yesterday was a weird, percussive echo of the finish line area announcements; it sounded like the inside of a car when you open only one window, and the air starts thumping around in the car. It was really very noticeable at the starting line.

I got a lot of sunglass closeup shots that turned out pretty cool; they're in the galleries, here are a few highlights:

Also, there is a cool spot where you can see the 250m mark, crews on the course, the big Olympic rings, and Windsor Castle in the distance; check it out.

Style watch: there are tons of uniquely painted fingernails - you notice this stuff when you are staring through a 500mm lens - but the style point of the day goes to the Canadian light women's double's nearly matching necklaces; it may have been coincidence, who knows. Another style point: the US light men got called for a uniform violation; it turned out that Robin Prendes had his Princeton longsleeve under his uni. But perhaps more strikingly, Anthony Fahden has an actual face! Shaving seemed to add a bit of juju to the crew; hey, whatever it takes.

And on a general London Olympic topic, some of the BBC commentators are fantastic to listen to (some are, well, less so), with comments like "If she can do it, that would be MAAAHSSIVVE..." But perhaps the best part about the Olympics on the BBC is that they just show the sports, and don't spend too much time cutting away to hagiography and other types of blubbering.