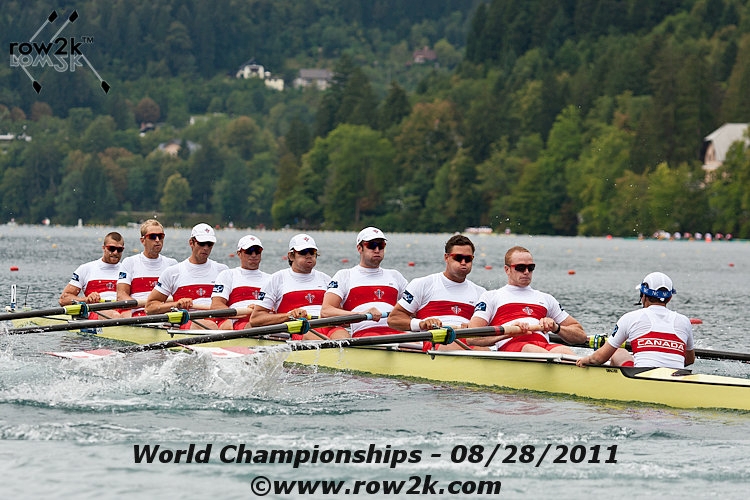 1. What inspired you to go to your first rowing practice; was there anything memorable about it?
I - Gabe Bergen: I was tired of getting eaten alive by bugs while tree planting.
II - Doug Csima: Thought it would be a good way to lose weight.
III - Rob Gibson: I went to meet women but ended up meeting Will Crothers. Here we are 10 years later.
IV - Conlin McCabe: I’m a 5th generation oarsman. It is a family tradition.
V - Malcolm Howard: I grew up 5 minutes from Elk Lake and I was too big to beat my older brother up hills on the bike.
VI - Andrew Byrnes: The rowing coach relentlessly recruited me.
VII - Jeremiah Brown: Watching the M8+ win gold in Beijing and thinking it looked pretty easy.
VIII - Will Crothers: My brother and Grandfather were rowers. I don’t remember my first practice; it was too early in the morning.

2. Was there a practice, race or other event when you fell in love with the sport, or when you knew you might not be too bad at rowing? When you thought you could make the national team?
I - Winning Head of the Gorge. One of the most beautiful race courses in the world.
II - The first stroke without our blades dragging on the water.
III - Rigging, de-rigging, (un)loading trailers, washing boats. Especially in the rain.
IV - When I was 15 years old at 2005 Canadian Henley Jr. B 8+ Gold
V - When I was 15 years old at 1998 Canadian Henley
VI - My first erg test where I almost beat the top athlete on the team.
VII - June 2012 moving the pair well with Will Crothers.
VIII - Watching the flag go up on the podium as a junior athlete at World Juniors.

I - Strengthen your chest to even out your back.
II - Learn to scull early.
III - Always work hard, rowing opens doors. If you can, row for Washington.
IV - Don’t let a win go to your head or a loss go to your heart.
V - Work hard, study hard. This sport can take you places.
VI - Train hard.
VII - It’s never too late to start rowing.
VIII - Row the pair and try and win everything.