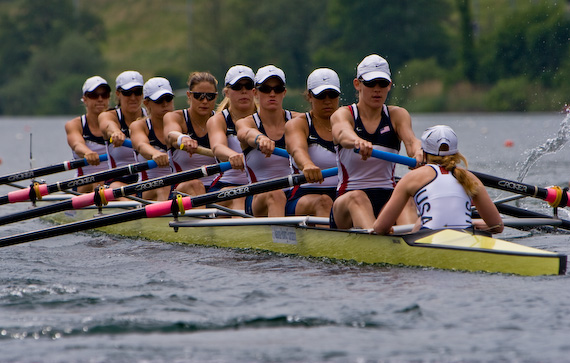 The 45-person roster includes 10 multiple-time Olympians with six Olympic medals. Both Bryan Volpenhein and Paul Teti will be competing at their third Olympic Games. Volpenhein raced in the men's eight in 2000 and 2004, winning a gold medal in Athens. Teti rowed in the lightweight men's four at the 2000 and 2004 Olympic Games. Other returning Olympians include Wyatt Allen, Anna Cummins, Caryn Davies, Michelle Guerette, Beau Hoopman, Jamie Schroeder, Patrick Todd and Mary Whipple. Allen and Hoopman were members of the men's eight that won gold in 2004, while Cummins, Davies and Whipple were members of the women's eight that won silver in Athens.

Cummins is the lone member of the team that will be competing in two events. She will race in both the women's pair and eight. Also of note, Josh Inman and Matt Schnobrich, who won the men's pair at the 2008 U.S. Olympic Trials - Rowing earlier in June, both made the men's eight and have decided to give up their spots in the pair in order to concentrate on the eight. Cameron and Tyler Winklevoss, the second-place finishers at trials, will now row the pair.

Rowing at the 2008 Olympic Games begins August 9 and runs through August 17. Finals are set for August 16-17. The competition will take place at the Shunyi Olympic Rowing-Canoeing Park, located in Mapo Town in the Shunyi district of Beijing. The rowing course is located about 45 kilometers outside of downtown Beijing. The venue also will host the flat-water and slalom canoe-kayak competitions.

Silver Single
Get our Newsletter!
SUBSCRIBE
Support row2k!
If you rely on row2k, please support row2k!