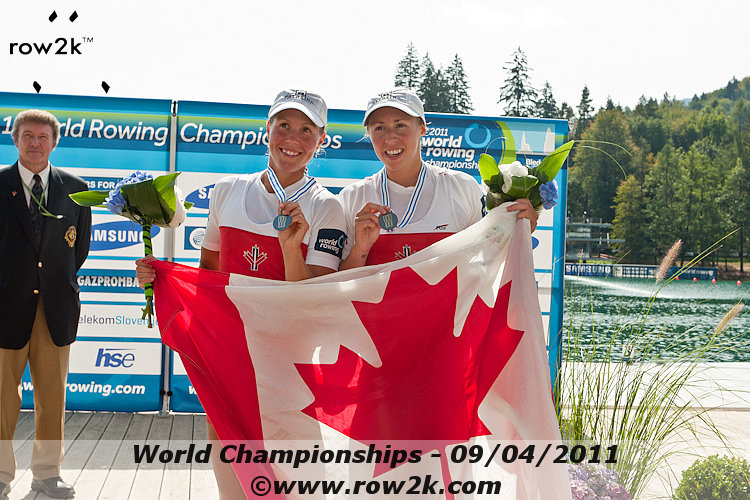 Canada struck silver again today in Bled, Slovenia, and qualified more boats for the 2012 Olympics and Paralympics. The second-place podium finishes came in the lightweight women's double and the LTA mixed four, a Paralympic event.

In the lightweight women's double, Lindsay Jennerich and Patricia Obee, both of Victoria, B.C., put on another solid sprint to the line to pick up a medal today.

Jennerich was the 2010 World Champion in this event with Tracy Cameron. However, an injury in early August took Cameron away from training and Obee, just 19 years old, stepped in.

"I'm about 99 percent as happy as last year," explained Jennerich. "You can never be happier than with a win, but given our circumstances and what we've had to overcome with the last minute injury, and the job of qualifying and the pressure going into it as defending World Champion, it's great. I'm really proud of how we just mentally stuck to the job and it paid off today."

Coach Al Morrow said: "The lightweight double had quite a day. They came in with a lot of uncertainty because of the substitution for Tracy Cameron with Patricia Obee. Obee is still very young. They obviously achieved at a very high level today. The X factor is Lindsay Jennerich - she's the constant and provides a lot of stability and she's a great racer."

"They raced a series of races that were really high end - it was what you expect from veteran racers, that ability to stay focused in the middle of the race and come back really hard at the finish," continued Morrow. "They did that both in the semi and final and it was pretty exciting. I think the performance is outstanding. It sets up very well for the Olympics next year."

"I felt more and more confident with each race," said Obee, who also rowed on the Under 23 team this year, and showed poise in each race at her first senior World Championships this week in Slovenia.

Earlier in the day, the adaptive mixed coxed four took a silver medal, and have qualified for the Paralympics based on being among the top eight boats. Great Britain won the race in 3:27.10, Canada clocked in at 3:31.84 and Germany was third in 3:33.27 (the adaptive rowing distance is 1000 metres).

Last year, Canada was able to edge out Great Britain at the line, but this year they settle for silver.

"We had an aggressive race, but came short of the goal," said coxswain Laura Comeau. "Last year we threw the ball in GB's court, and this year they threw it back. We love to play, so it's game on for the Paralympics in London next year!"

"It was a tough race and it wasn't the result we wanted," said Nolan, who was also part of the same Canadian lineup last year, "but the plan was to be aggressive and we achieved that. We know what we have to do next year."

The Canadian men's four also knows what is has to do for next year, and the crew members demonstrated a hint of that today in a strong B final win, to place seventh overall and qualify this boat for the Olympics (top 11 were awarded a berth).

The crew is Derek O'Farrell (Montreal, QC), Will Dean (Kelowna, BC), Kevin Kowalyk (Winnipeg, MB) and Anthony Jacob (Vancouver, BC).

"It was amazing. We felt our top speed and we held it - we just attacked the whole race. It's a fantastic feeling and it was a great race, which was executed very well," said O'Farrell. Although the crew did not make the A final, they redeemed themselves with a win in today's B final. "We showed decent speed at the beginning of the week and then I think we kind of got ahead of ourselves thinking we could win a medal. So we didn't qualify for the A final and we were devastated, but we reminded ourselves that the whole point now is to qualify the boat and we had a great race today."

The lightweight men's double finished fifth in today's tight B final for this event, grabbing the final qualifying spot for the Olympics next year.

"We saw some great performances from the team here this week, and we have several boats that came close and can climb up the ladder over the next year," said Rowing Canada Aviron High Performance Director Peter Cookson. "I think we did what we needed to do to set ourselves up for the next 11 months. We have a lot of planning and work ahead to keep our standards up to this incredibly high level, and if we manage that and work as a team, we are on track for next year."

Although the schedule moved ahead to earlier times this morning because of predicted bad weather, the scenic regatta site was sunny and warm today.

The 1980 Olympic Boycott: Rowers on Missing the Games - Part 2
Get our Newsletter!
Enter your email address to receive our updates!