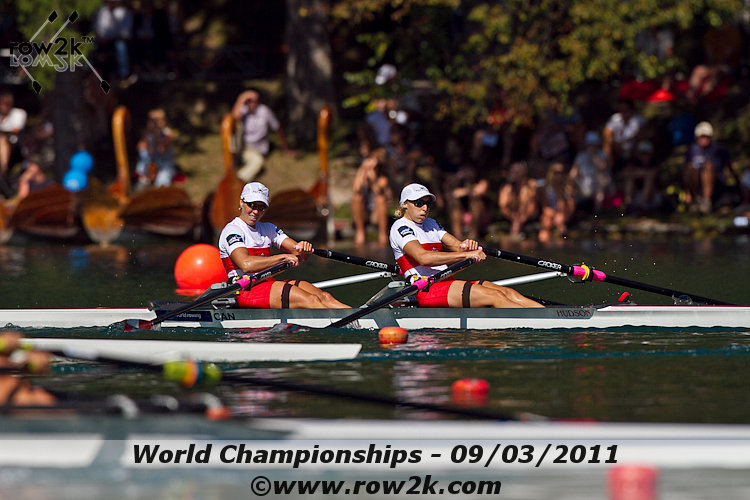 On Saturday, two Canadian crews advanced to the finals and earned Olympic berths for Canada based on their performances at the World Rowing Championships in Bled, Slovenia.

Today the Canadian lightweight women's double rowed a gutsy race to come from behind and finish second in the semifinal. This puts this crew in the medal final and qualifies this boat for Canada for the 2012 Olympic Games.

The crew is Lindsay Jennerich and Patricia Obee, both of Victoria, B.C., and they now will race in the final on Sunday. "Obee and I feel very happy that we raced a race that earned Canada a berth in the 2012 Olympics," said Jennerich, 2010 World Champion in this event. "I think that the race today was for the nation and tomorrow, we can go out there and race for ourselves and see just how fast we can go. I'm really proud of the maturity and poise that Obee has showed thus far at this regatta, and after only two races with her I feel she has earned absolute trust from me."

Obee, still only 19, is the lightweight team alternate filling in for Tracy Cameron, who is recovering from a rib injury. She earned a bronze medal earlier this summer at the World Under-23 Championships in the lightweight single.

Australia won the semi this morning in 07:03.25, Canada was second in 07:03.74 and the U.S. also move forward from third (7:04.60) in this race. Greece, New Zealand and Great Britain will also contend for medals tomorrow after advancing from the other semifinal.

"I believe that we can go out there tomorrow and stick with the pack and leave nothing on the course, letting the chips fall where they may," continued Jennerich.

The double's race comes a day after a silver medal for the Canadian women?s eight. "The neat part about going into today's race of the lightweight women's double was the success of the women's eight yesterday. John Keogh, their coach, Lesley Thompson as cox and the eight women did a fantastic job yesterday closing the gap on the U.S.," said women's coach Al Morrow. "I think the double saw that, as they train together, and it was extremely motivating - especially that it's just 11 months out to the Olympics and it did set us up for a great, gutsy race today."

Another highlight for the Canadian team today was a Paralympic qualification in the adaptive coxed four.

"The goal of the semifinal was to qualify a boat for the 2012 Paralympics," said Montgomery, 2010 World Champion in this event. "We did that with a solid race today. We had good races in both the heat and the semi, and now we are going to put the things that worked well together into one race and give it our all in the final."

This afternoon, the men's pair, although already qualified for the Olympics, fell short of a podium position today. Dave Calder of Victoria and Scott Frandsen of Kelowna, BC, both team veterans and 2008 Olympic silver medalists in this event, finished fifth today in the pair. Eric Murray and Hamish Bond of New Zealand dominated the race to win in 6:14.77, less than a second off the world's best time in this event. Great Britain was second (6:16.27), followed by Italy in bronze position (6:21.33).

The lightweight men's double - Doug Vandor (Dewittville, QC) and Cam Sylvester (Caledon, ON) - had a challenging time in today's semifinal and finished sixth to move to the B final. This boat will have to finish top five (or 11th overall) in the B final to achieve Olympic qualification. New Zealand, Germany and Italy qualified from this semi.

The men's four was also sixth in its semi - Greece, Australia and Germany advanced to the A final from this race. The four is Derek O'Farrell (Montreal, QC), Will Dean (Kelowna, BC), Kevin Kowalyk (Winnipeg, MB) and Anthony Jacob (Vancouver, BC). They will row in a B final and can still qualify this boat for the Olympics (top 11 or fifth in the B final).

"We had very good semi results from the adaptive four, and Lindsay and Patricia in the light double," said Rowing Canada Aviron High Performance Director Peter Cookson. "Unfortunately, it was a bit too much of a pace out there for our men's four and lightweight men's double, and our men's pair gave a good effort but fell short of the podium."

Also today, the women's double of Kerry Shaffer (Welland, ON) and Emily Cameron (Summerside, PEI) finished first in its C final in 07:02.98. This puts this crew 13th overall.

"They are clearly a crew with the physical tools to compete at this level," said the double's coach, Jeff Powell. "We will work very hard this winter to add the level of technical skill that will allow them to take advantage of their fitness and compete against top crews."

Conditions today were mainly slight cross-tail winds and sunny and warm. Racing concludes Sunday, Sept. 04. So far, Canada has three medals at this regatta (bronze in the men?s eight and coxed pair; and silver in the women?s eight). Canada has two medal finals tomorrow.

This Week's Best of Rowing on Instagram 7/10/2020
Get our Newsletter!
Enter your email address to receive our updates!