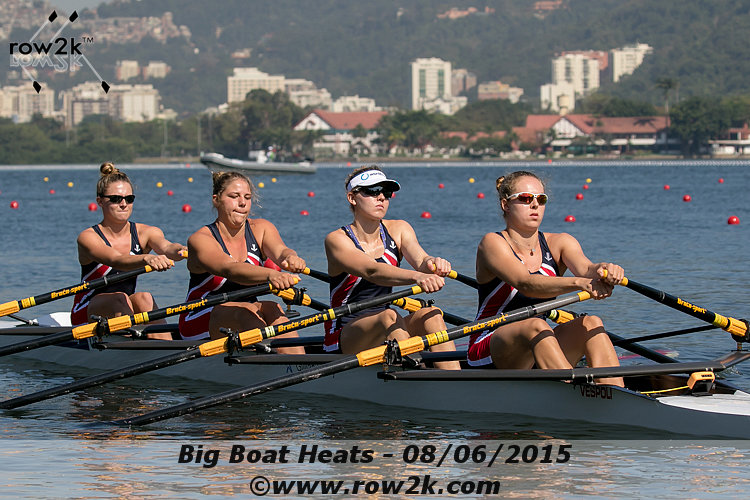 RIO DE JANEIRO, BRAZIL - The women's quadruple sculls finished second and the men's four finished third in Friday's semifinals to advance to the finals at the 2015 World Rowing Junior Championships.

With five additional crews qualifying for the finals on Thursday, the U.S. has seven finalists at the World Rowing Junior Championships for the first time in history.

After finishing third in its heat, the women's quadruple sculls crew of Emily Kallfelz (Jamestown, R.I.), Elizabeth Sharis (Bettendorf, Iowa), Emily Delleman (Davenport, Iowa) and Meghan Gutknecht (Guilderland, N.Y.) came back to finish second behind Germany in the second of two semifinals. The crew sat in third position after 500 meters before using a strong, base rhythm to move into second position at the midway point of the race. Germany led from start to finish, clocking a 6:45.63. The U.S. finished second in a 6:47.95, followed by France. Great Britain, Canada and Switzerland qualified from the first semifinal.

"Yesterday was a bit of a struggle," Kallfelz said. "The race plan that we had decided on, we didn't really execute very well. Today, we decided to get back into our normal groove of having a strong base. Our sprint isn't super great, so we want to make sure that our base is very good, so when we get to the end of the race, people can't sprint to hard on us. I think we really executed well on that today."

"Yesterday, we obviously weren't on the best level possible, but today, we had a good race, a good rhythm," said coach Guenter Beutter. "We re-established a good rhythm, a good row compared to yesterday when we were basically falling apart. They were really well connected, and I think they executed the race plan perfectly.

"We're focusing on recovery right now and making sure that everybody is getting as fit as possible. Tomorrow, we'll talk the race plan over and focus a little more on a strong third 500." 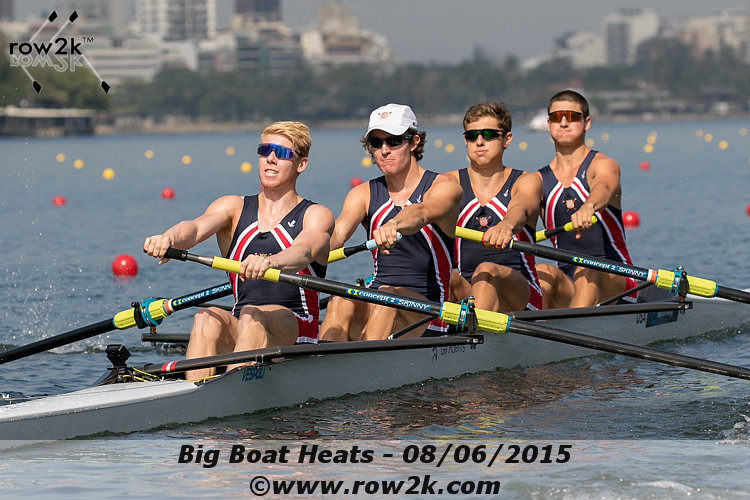 In the men's four, Daniel Hogan (Lafayette, Calif.), Liam Corrigan (Old Lyme, Conn.), Benjamin Cohen (Allentown, Pa.) and Brock Bozzani (Long Beach, Calif.) overtook Serbia in the final 500 meters to grab third place and a spot in the final. Serbia, Romania, Great Britain and the U.S. established the early advantage on the rest of the field, making it a four-boat race for the three qualifying spots. Serbia led through the midway point before Romania moved into first place. The U.S. and British crews continued to stalk Serbia over the final 1,000 meters, overtaking them in the final quarter of the race. Romania clocked a 6:11.54 to win the race, followed by Great Britain in a 6:13.87 and the U.S. in a 6:14.11. The three crews will take on Germany, Greece and Spain in the final.

"I think between now and tomorrow, we're really just going to focus on cleaning up our blade work in the first 750 and mentally getting ready for our move," Cohen said. "We really want to change the way we're approaching the race, so instead of thinking of it as 500s, we're thinking of it as 750-500-750 and visualizing what that is going to be like racing tomorrow. We're really excited."

"I think this year they were much better prepared for this experience," said coach Nick D'Antoni. "That semifinal, we knew was going to be really tough, but I think being through the ringer down here, they were ready for primetime. In this event, the medals are wide open. Maybe one crew has been able to separate themselves definitively, but all the other medals are up for grabs, and we can be in contention. I'm certainly happy to see them progress and overcome a little bit of adversity. Last year, we were behind the learning curve, and this year we are a little bit ahead."

The women's double sculls duo of Elise Beuke (Sequim, Wash.) and Isabella Strickler (Grosse Pointe, Mich.) finished fourth in its semifinal, just missing a spot in the final. Beuke and Strickler raced in fourth the entire way down the course, cutting the margin from third to less than a second going into the final 500 meters. However, the U.S. was unable to catch Hungary over the final quarter of the race. Germany led the race from start to finish, winning with a time of 7:21.13. Italy finished second, followed by Hungary. Beuke and Strickler clocked a 7:31.60 and will now race in the B final against Norway, South Africa, China, Brazil and Slovenia.

In the men's single sculls, Andrew Morley (Seattle, Wash.) was unable to repeat his winning performances from the previous two days, finishing fifth in the semifinal to move on to the B final. With the top three scullers advancing to the final, Germany's Henrik Runge took the lead off the start and never relinquished it. Morley sat in fourth place through the 1,500-meter mark but could never get on terms with the top three scullers. Runge won the race in a 7:02.82, followed by Australia's Adam Bakker and Lithuania's Armandas Kelmelis. Morley finished with a time of 7:13.83. He will take on scullers from the Czech Republic, Belgium, Peru, New Zealand and Ukraine in the B final.

The men's pair of Oliver Bub (Westport, Conn.) and Lucas Manning (Westport, Conn.) also finished fifth in its semifinal. The crew sat in fifth place the entire way down the course. With three to qualify, Romania, Denmark and South Africa broke the race open during the third 500 meters. Romania won the race in a 6:48.70. The U.S. crew finished with a time of 7:00.83. Bub and Manning will now race in the B final against Italy, Chile, Great Britain, France and China.

In the women's single sculls, Eliza Kallfelz (Jamestown, R.I.) was unable to finish the race after capsizing during the second 500 meters. Kallfelz was in fifth position at the time of her flip. Greece's Sofia Asoumanaki won the race in a 7:40.86. China's Xiaoman Liu and Bulgaria's Desislava Georgieva grabbed the other two qualifying spots. Kallfelz will be allowed to race in the B final. She will take on scullers from Chile, Spain, Belgium, Croatia and Japan.

The duo of Joe Sterner (St. Charles, Ill.) and Jack Luby (Barrington, R.I.) finished third in the C final of the men's double sculls for a 15th-place finish overall. Sterner and Luby moved into third position in the second quarter of the race, crossing the finish line in a 7:08.19. Japan won the C final in a 6:52.54.

After winning its C/D semifinal in the morning, the men's quadruple sculls crew of David Orner (Darien, Conn.), Andrew LeRoux (Venice, Fla.), Kris Petreski (Pound Ridge, N.Y.) and Phoenix Susak (Lake Oswego, Ore.) came back to finish third in the C final for a 15th-place finish overall. The crew crossed the line in a 6:24.38, 3.50 seconds behind the winners from Croatia.

The women's pair of Ashlyn Dawson (Annapolis, Md.) and Arianna Lee (Folsom, Calif.) led its heat from start to finish to earn a spot in Saturday's final. Russia won the other heat, recording the fastest time of the opening round by less than 0.10 seconds. The two crews will take on boats from Chile, New Zealand, Germany and Canada in the final.

The women's four of Kaitlyn Kynast (Ridgefield, Conn.), Dana Moffat (Manlius, N.Y.), Marlee Blue (Seattle, Wash.) and Katy Gillingham (Seattle, Wash.) advanced to the final by finishing second to Germany in Thursday's heat. Italy and China took the top two spots in the first heat. Great Britain and New Zealand advanced out of the repechage to join the four crews in the final.