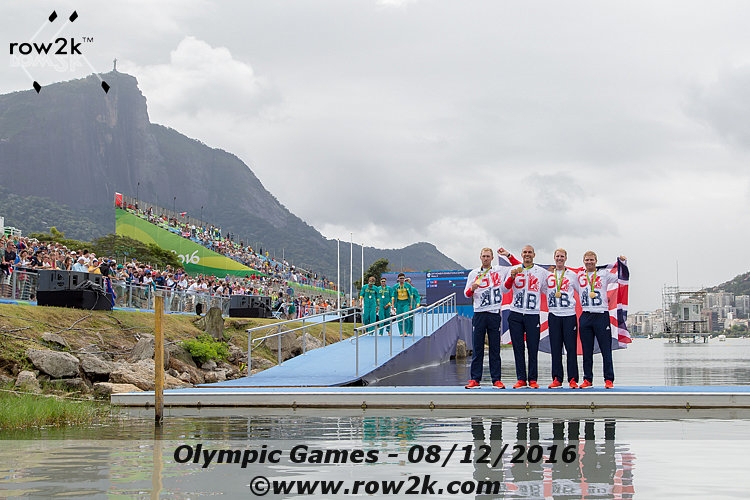 The French lightweight men's double sculls of Jeremie Azou and Pierre Houin earned Olympic gold today in a tight final. Coming in just after France was the Irish O'Donovan brothers. Paul and Gary O'Donovan won the first ever medal in rowing for their country and also the first medal for Ireland at these Olympic Games. Norway's Kristoffer Brun and Are Strandli took bronze.

For the lightweight women's double sculls, the Netherlands crew of Ilse Paulis and Maaike Head led the race from start to finish to earn gold. This is the first Olympics for Paulis and second for Head. In the silver medal spot was the Canadian duo of Patricia Obee and Lindsay Jennerich Obee and Jennerich also raced together at the London Olympics. Bronze went to China's Wenyi Huang and Feihong Pan.

The men's four rivalry between Great Britain and Australia continued with these two countries dominating the final. Great Britain's Alex Gregory, Mohamed Sbihi, George Nash and Constantine Louloudis managed to push ahead at the 1,000-metre mark to maintain a slight edge and hold off the Australians through to the finish. The win for Great Britain put them into the history books as the only country to win this boat class five times in a row. The World Champions Italy ended the race with an impressive sprint to win bronze.

Great Britain scored a second gold in the women's pair. The duo of Helen Glover and Heather Stanning successfully defended their 2012 Olympic gold to be the only British women to have two Olympic golds in rowing. New Zealand's Rebecca Scown and Genevieve Behrent took silver and Denmark's Hedvig Rasmussen and Anne Andersen took bronze. This is the first time Denmark has won a medal in this boat class.