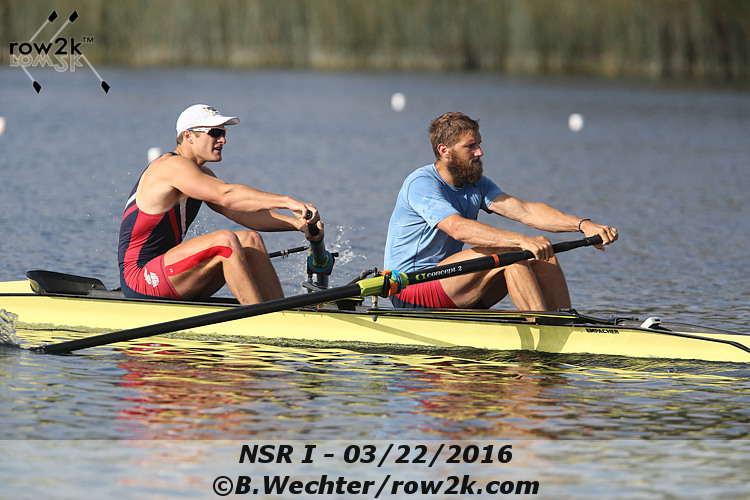 One fact that stands out following the semifinals at the first national selection regatta of 2016-aside from which boats advanced to Thursday's finals-is that after months of winter training, the difference in speed and fitness among crews can be measured in fractions of a second.

"It's exciting. The team is doing really well," said London men's four bronze medalist Henrik Rummel (Pittsford, N.Y.), who advanced to the final with teammate Seth Weil (Menlo Park, Calif.). "I'm really excited for the team because we have a lot of good athletes. The results show that we're really competitive. Everyone brings out their A game, and no one is giving an inch," he said. "Anyone can win it on the day, and that's what you want. It's a competitive team."

At the conclusion of three days of racing at the 2016 USRowing National Selection Regatta I, the top crews in the men's and women's pairs, and the lightweight men's pairs have been sorted out. And their dreams of making the 2016 U.S. Olympic Team draw closer.

In reaching the final, every athlete that advanced has earned an invitation to the selection camps from which the crews for the men's and women's eights, men's four, lightweight men's four and women's quad will be chosen.

What remains on the line in the men's and women's heavyweight pairs is the opportunity to race at World Rowing Cup II in Lucerne, Switzerland in May, and with a top-four finish, the choice to accept a spot on the team or remain in the "big boat" selection camps.

Behind them in second with a 6:59.22 from USTC - Princeton was Grace Luczak (Ann Arbor, Mich.) and Felice Mueller (Cleveland, Ohio). And in third in 7:07.69 was Emily Huelskamp (Sainte Genevieve, Mo.) and London women's quad bronze medalist Kara Kohler(Clayton, Calif.).

In third, in 7:09.18, from the New York Athletic Club was Sara (Hendershot) Lombardi (West Simsbury, Conn.) and Sarah (Zelenka) McIlduff (Itasca, Ill.), who are competing together for the first time since finishing fourth in the event at the 2012 Olympic Games in London.

"We've been ready. We just had to kind of go show it," said Lombardi. "I feel good. I mean, I'm so happy to be in the boat with (Sarah). She is the ideal teammate. We just love doing this together, so it's a treat more than anything else. To be able to race really fast pairs is what we want to do. I think we just had a lot of fun out there," she said. "We are going to race the final as hard as we possibly can and light that course on fire. And then we'll see. That's all we can do. We have to take it a step at a time."

"I thought we had a solid piece today, a little better than the heat," Cole said. "It's a deep field, and it's going to be a tough race tomorrow. We're just going to have to come down and be better than we were today. We are in a decent spot and we're going to have to just come out and try to have the best piece we can."