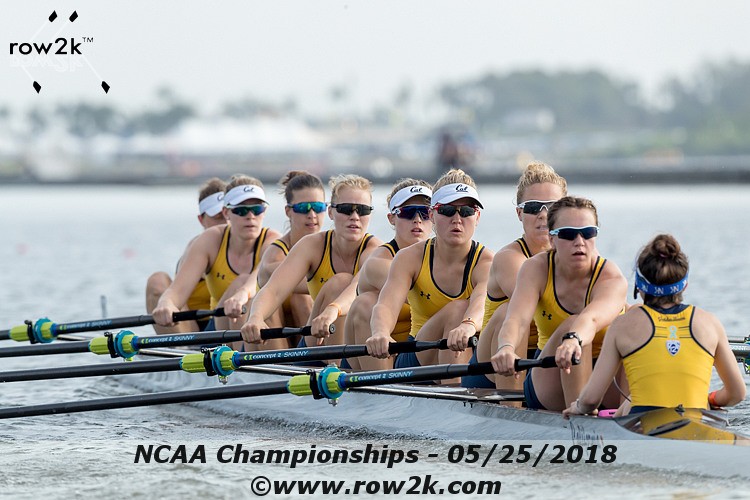 (The original version of this story has been updated to include the revised schedule and Friday afternoon results.)

Rowing is an outdoor sport, be ready. That's pretty much what crew coaches will tell their athletes when the weather forecasts are predicting challenging conditions. But this spring racing season has pushed the limits of that be prepared for anything motto.

For the past several weeks, championship rowing regattas across the country, particularly on the East Coast, have been forced to endure and scramble to get their racing in. In Philadelphia last weekend the largest scholastic regatta in North America was forced to pick up and move the entire show across state lines to New Jersey.

And so, in keeping with the Mother's Nature mood, it is happening again this weekend in Sarasota, Florida at the 22nd NCAA Women's Championship Regatta in Nathan Benderson Park. So here it goes again.

Even as crews were arriving at the venue earlier in the week, a tropical low pressure weather system was winding up in the Gulf of Mexico. By Friday morning, the first day of racing, the schedule had already been changed, and compressed, and the favored and seeded racing lanes were flipped to accommodate the increasing winds.

The weather system - named Tropical Storm Alberto overnight - had coaches in the boatyard early Friday morning talking that be prepared motto throughout the morning and into the afternoon. And there was talk of the regatta be shortened and compressed even more.

By late afternoon, following a long delay between the heats and the reps because of heavy rain, the regatta schedule was not just compressed, but squished flat.

Instead of three days of racing, Sunday was completely eliminated and all finals are now set to be run on Saturday. (See the new schedule here.) 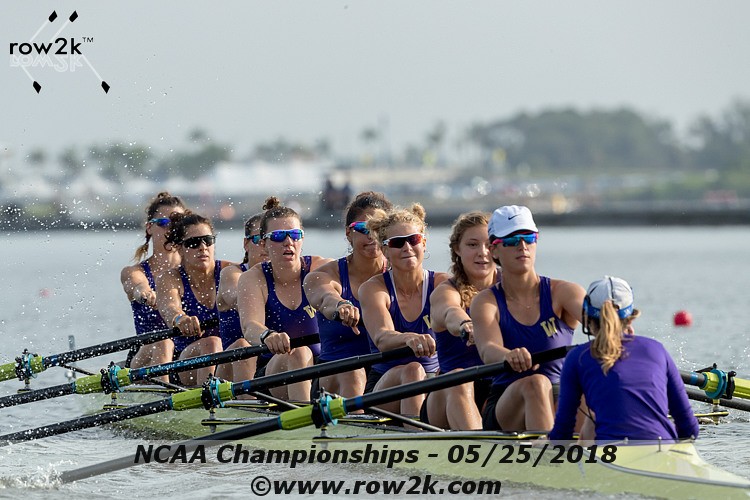 "We'll be ready," said Washington head coach Yasmin Farooq. "You come into a championship like this and you have to be ready for these things, and we've prepared to race in all of these scenarios. If (shortening the regatta happens) that's what we're going to do."

For Washington and the rest of the crews that advanced all of their boats straight into the semi-finals - among them Washington, Cal, Texas, Stanford, and Michigan - a successful morning of racing meant not having to deal with the afternoon weather, which, of course, included building thunderheads and another change in the schedule. This one delayed the reps till after 5 PM.

As for the morning racing, that pretty much went as expected.

Washington continued to push for a repeat of their sweep performance of last year national championship squad, not just winning all of their races, but winning them convincingly. Of the first varsity eights, only Cal posted a faster time in the heats. Washington advanced from the first D1 heat in 6:17.51, with Princeton also advancing directly to the semifinal in 6:23.27.

Two heats later, Cal advanced its first varsity eight with a time of 6:15.89, over Michigan, which crossed in 6:22.19. In the preceding heats for the second varsity and fours, Washington advanced the rest of its crews.

Cal followed suit, and could play spoiler to a Washington sweep, if not challenge for the championship. It was, after all, Cal whose varsity eight handed Washington its only 1V defeat of the season.

Cal head coach Al Acosta, was happy with his team's first day showing. "It was good. Get the rust out and hope for the best, and I thought (all three crews) did a nice job. I think the real worrying is about tomorrow and Sunday. So, just try to win each race and keep your fingers crossed and hope for the best.

Like Washington, Acosta said Cal will be ready for whatever comes. "I can only just speak to us, but I think we handle these situations pretty well. The kids were ready for all sorts of weird situations over the next three days, and we'll just try to keep relaxed, stay in the shade."

After a long rain delay, four more teams advanced into the running for the overall championship with all three crews in the A/B semi-finals, including Virginia, Yale, Iowa and Ohio State. 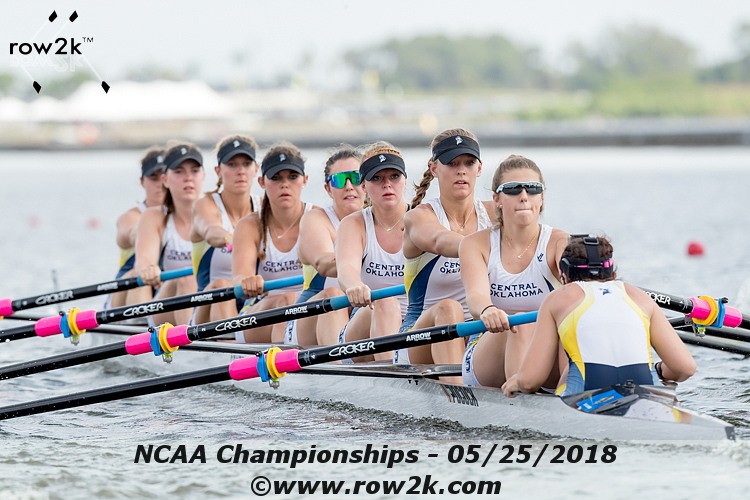 "Today went really well," said head coach Montia Rice. "We were right on track with where we want to be. It's nice to see after three weeks off to get out there and row that way. The four, I'm pretty excited about. They had a great, tight race and were able to get in front, so I think as far as day one goes, mission accomplished. But we still have to get ready for tomorrow, or Sunday, who knows."

Rice was among the coaches who were preparing for a major schedule change, and is preparing to race the final Saturday, instead of Sunday as scheduled.

"If it does move, we're prepared," he said. "We've talked about it continuously because being from Florida, I know the weather here is crazy, so you just have to be ready for anything at any time. I think we will be fully prepared for anything that happens.

"I'm hearing that the finals will be tomorrow, because the reps are this afternoon, and the great thing, is we don't have to do that," he said. "So, we'll just get out of the sun and chill out and get ready for tomorrow."

Defending champion Western Washington, also advanced the eight and four directly into the finals, but the eight had more of a battle in their heat. UC-San Diego led right into the final 500-meters, until the Vikings moved through to finish first. 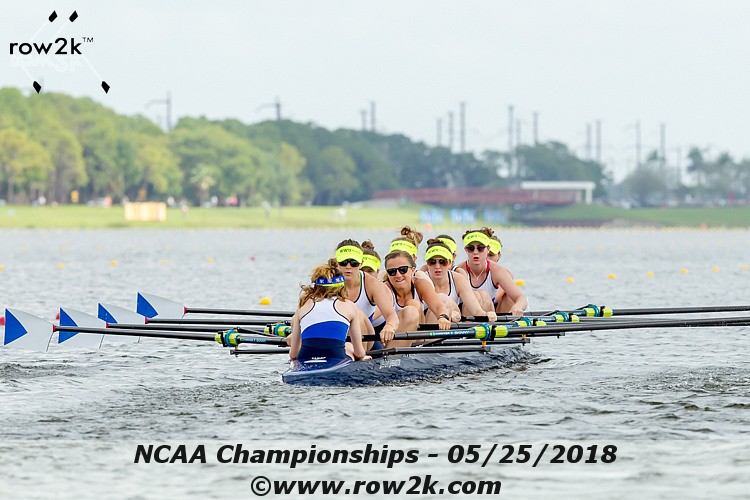 Bettger said that during the race, the crew did not panic and moved when it was time, despite being two to three seats back for the majority of the race.

"They heard it, and they heard it enough, and they finally got sick and tired of it and they just moved. Really good job for (San Diego), they're doing their best, but we know we can go a little bit harder, and that's what we did, and we just busted out and I'm so proud of them."

Bates College came into the regatta as the team to beat, not just because they are the defending champions, but because they have been fast and impressive all season. In the Friday heats, they kept the pressure on the rest of the field, advancing both their first and second eights. 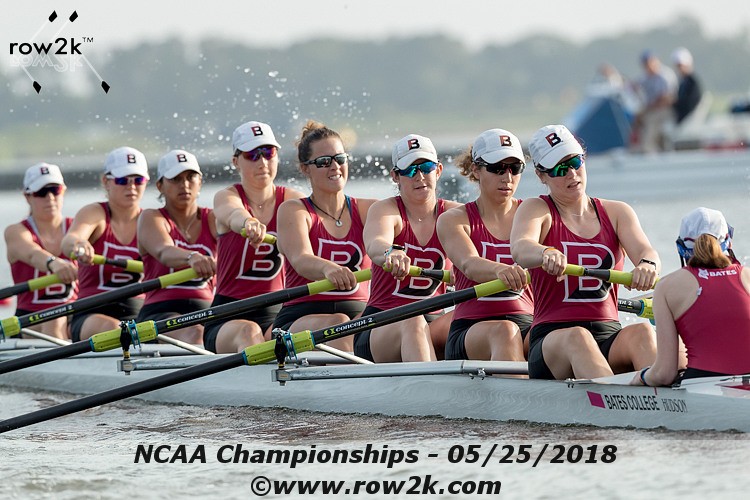 Bates coxswain Elizabeth Folsom said the crew was rested and ready to race after two days of practice in Sarasota. "We had the past two days to practice," she said. "So, that really helped us shake off the cobwebs and get ready to go.

"We felt pretty comfortable coming down the course. It was good, it was a good run through of our race plan before the final. We hit all the moves, all the tens we wanted to hit, so now we know exactly what we need to do."

In the afternoon reps, WPI advanced their second eight into the final, and now have both boats in the grands. With WPI making the programs' first appearance at the NCAA Championships, head coach Jason Steele was a very happy coach. 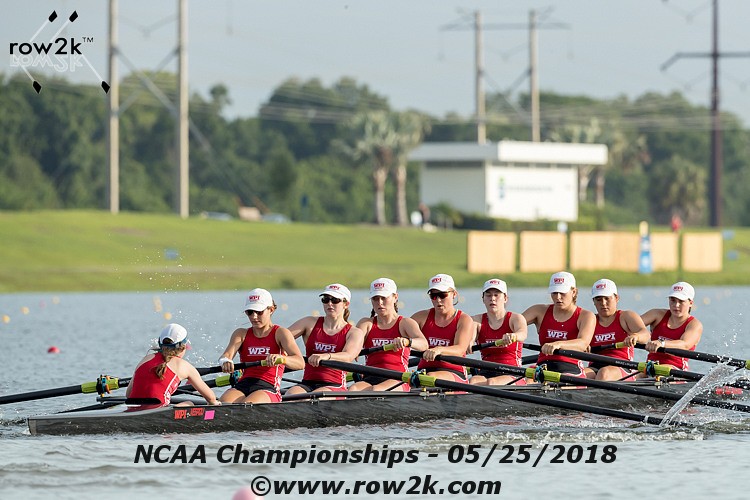 WPI in the morning heats

"It's a historic day for WPI," Steele beamed after the rain delayed rep. "First time in the NCAA and we have both boats in the grand finals. I don't want to say we've accomplished our goals, but we have certainly set ourselves up to accomplish the goals we set out at the beginning of the year."

Steele said the delay added to an already stressful event. WPI rarely travels to race outside of Worcester, Mass., so having the first trip be to the NCAA Championship made that experience even more of a first time adventure.

"We're not a traveling team," he said. "We race on Lake Quinsigamond constantly, so I think just the stress of negotiating being someplace else added to the stress of weather delays. So I'm real proud of the athletes for managing that. It's probably a small thing for some programs, but for us it's a whole new experience." 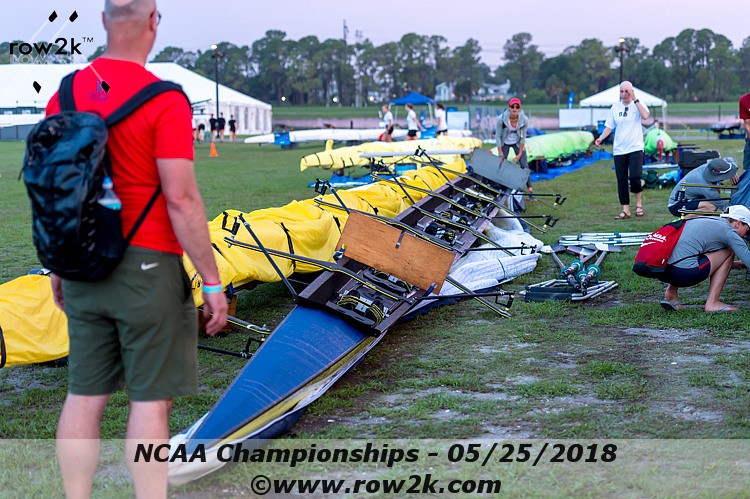 If there was any one crew that suffered a shock to the system from the wind, it was Yale University. Despite being tied down Thursday afternoon after practice, both Yale eights where heavily damaged by wind Thursday night.

Even before Porter and his athletes made it down to the course, several coaches, boatmen and athletes from competing schools, had turned the boats over, drained them of rainwater and were already making repairs and switching equipment from the second eight hull to the first.

"That was really kind," Porter said of the help. "I got the phone call from the Stanford coaches at the hotel, our boat man was ahead of us and by the time I got here on scene, he and the Ohio State boatman and the USC boatman were all pitching in and helping.

"They got the boat up, and they were already working on the repairs. The Cal coaches and the Texas coaches were all helping us switch the boat up. It was nice," Porter said. "I think the wind got under our boat cover and kind of lifted it. These boat covers are kind of like nylon sails." 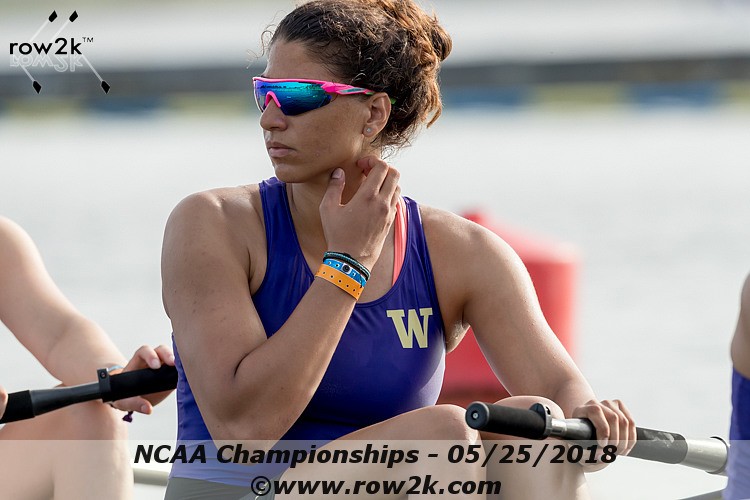 Washington Freshman Sofia Asoumanaki celebrated her 21st birthday by racing in the varsity eight in her first NCAA championships. Asoumanaki, of Athens, Greece, has plenty of experience in big race situations.

She raced in the Greek women's double in the final at the 2016 Olympic Games, finishing fourth, and has been on the national team since she was a junior. She won the 2015 World Rowing Championships in the women's double.

"It's an amazing feeling being here," Asoumanaki said. "It's an honor to be one of the Huskies. I'm really happy that we had a good start in our boats and I can't wait for the next one."

A group of Special Olympians were treated to a meet and greet with the athletes from Central Oklahoma Friday after racing finished yesterday. The athletes spent time singing autographs and showing them an eight up close. 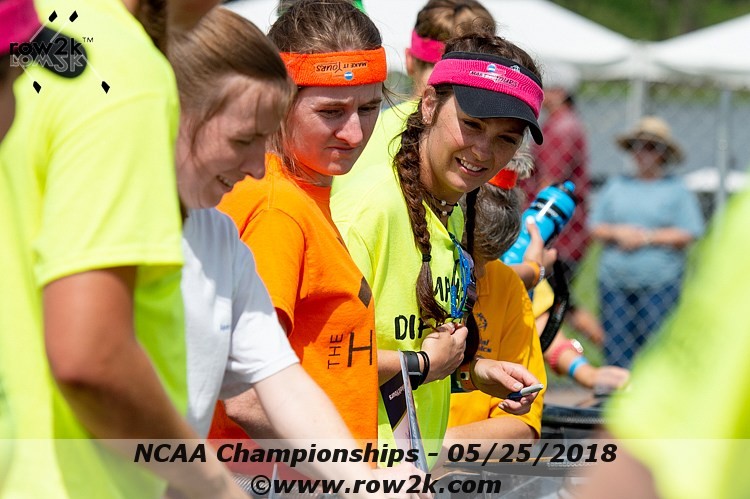 Make a Difference
back to top
NCAA Championships Features 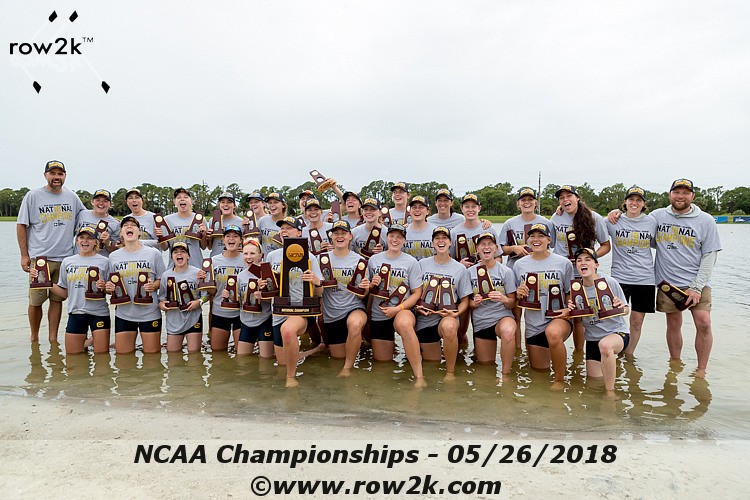 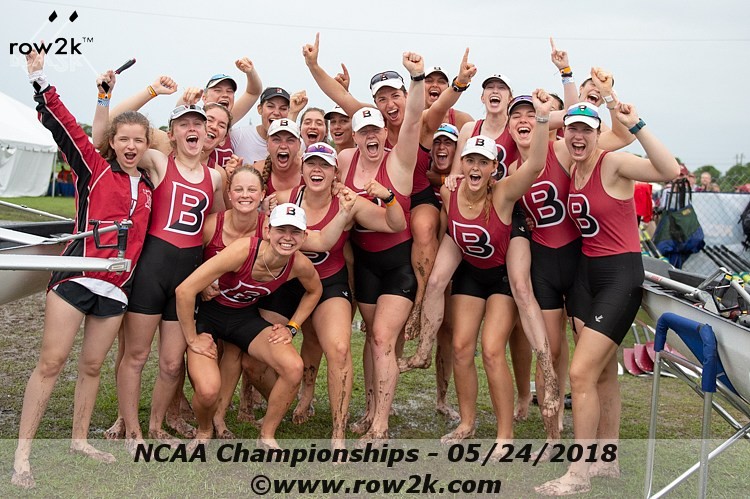 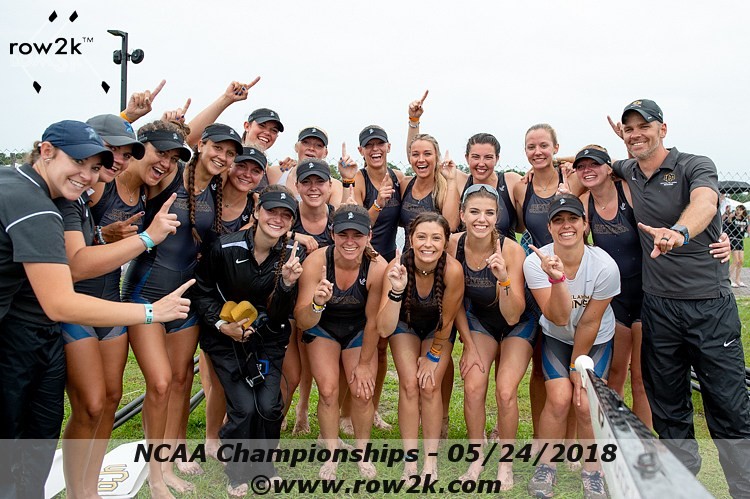 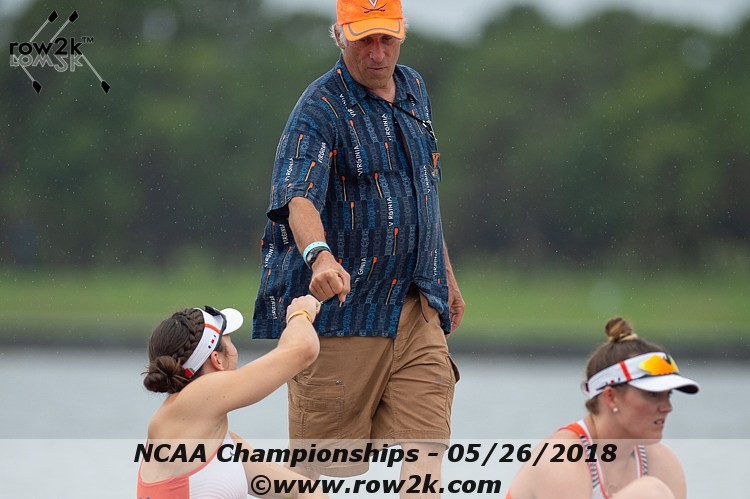 Saying So Long to a Boatyard Payne
Get our Newsletter!
SUBSCRIBE
Support row2k!
If you rely on row2k, please support row2k!