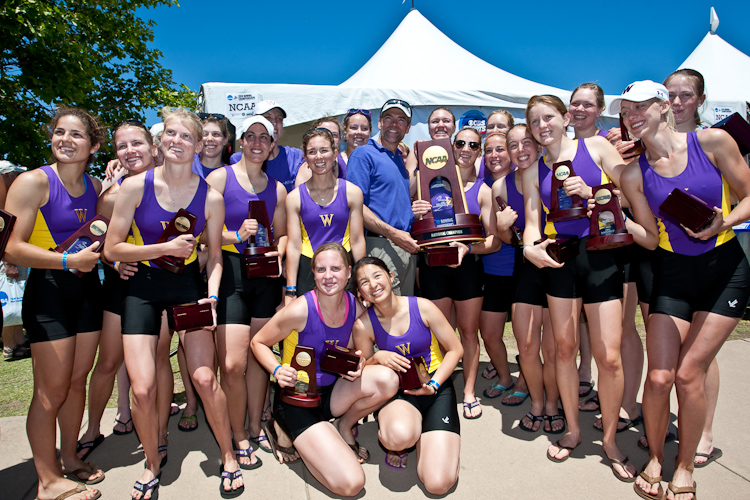 A best-ever team effort by Williams featuring both a gold and a bronze in the V8, and a two-peat for the silver by Bates, topped off a day of racing that started with some fierce DI V8 semis, and finished up with a raucous medal ceremony for the DIII champions and runners-up.

In winning two of their previous DIII championships, the crews from Williams had put two crews into the medals, but both times it was for a slightly bittersweet silver and bronze. At the time, an observer could see that the team was clearly happy to have taken the team championship, but that missing the gold medal took just a little of their joy in the moment away.

This year both champion trophies head back to Massachusetts, along with the bronze medals for the 2V, and the crew was obviously happy about it. Head coach Justin Moore noticed something different in the crew over the winter, and thinks it made the difference.

"In January, when the crew reconvened and came back, we were out of season, and the kids were dropping by, and I could tell that there was a hunger that was unusual, more than just eight women," Moore recalled after the racing. "It wasn't going to be a Varsity and then the rest of the program, there was tremendous depth and there were a lot of women that wanted just to get better. When we went into season on February 15, we got to lay our eyes on them and see them at a practice, I said I don't know if it is possible, but I think this crew could put themselves in a position to try."

The crew continued to challenge themselves and each other, right down to choosing a name for their hull. During the spring, the crew had to dedicate and come up with a name for their new racing shell.

"When we were deciding what name would be appropriate, one of the women suggested 'Outlier,' something that stands outside the statistical mean, the statistical average," Moore said "We had discussed the book by Malcolm Gladwell, and the 10,000 hours, and the things you need to do to in order to separate yourself from the middle of the Bell Curve, and these women have really embraced that, and have been willing to live, not the average life of a college student, but something else so that in situations like this they can perform like they just did. When they put the name on the boat, they said, well, I guess now we have to deliver, and I think they have all year."

The Williams first and second varsities were only two positions and some 5.2 seconds apart, an extremely close margin for two eights from the same program. Moore commented on selecting two boats from such closely matched athletes.

"There is a lot of talent and getting that right… honestly, in the end when you have two boats that close together, you don't know if you have nailed it 100% right," he said. "But I think that what was amazing was that each woman, no matter what boat she was sitting in, it wasn't about well, I should be here, it was about what are we as a team trying to accomplish. And the second eight was so good that the women in that boat did not feel that they were missing anything as part of the experience. They did not feel like the younger sister of the group. They took tremendous pride in their boat and tremendous pride in the boat race, and the thing that I was so happy for them here was that, all season long in the JV event they were 15-20 seconds out in front of the field. To see them race in close quarters as well as they have when they had so little experience was incredibly exciting and I am so glad they got that opportunity."

Repeating this year in both the silver medal position for both the team and V8 trophies, Bates proved that last year's breakthrough performance put them on the map rather than merely on the radar for a blip or two.

Bates coach Peter Steenstra and his charges made their way to the medal stand in a slightly circumspect manner, including detours to the tropics that involved heaving rocks around to stay in shape.

"This is my third year at Bates, and only my second year as the head coach, and the biggest difference this year is that we had graduated a large class, and then had a lot of people away in the fall," he said. "So we went from about 12th place at the Head of the Charles, and now we are second place here. In the fall, we had nine women studying abroad in this group. Even though some of them were in places like Ecuador, they were training every day. Two in particular were running down to the beach, throwing rocks around, then running back to their hut. They had all planned to go away at the same time, and all planned that when they did it they were going to find some rowing, or they were just going to be as active as they possibly could."

Steenstra said that a little luck with the weather may have contributed to the crew gelling after the unusual fall. "We had the benefit of a very early spring - everyone did except the Mid-Atlantic area, which got pounded by snow - but we were on the water 24 days ahead of last year. So we came back from our Texas trip at the end of February, and we were on the water four days later, which is completely out of the ordinary."

Steenstra felt that, perhaps after Williams, the chase for the team points was in reach. "Our attention was immediately on the Ithaca varsity eight, and we knew that Trinity would come on late, and we also knew that the Williams 2V was going to be really strong," he said. "The finishes for the team points were just wide open, and that it was going to be a tough battle. We all chase Williams, and their 2V is very strong. No one can compare with their depth. Their 3V could probably do very well here. But at the top, their top group is only four seconds ahead of our group, so it's to where none of us is out of the game.

"We didn't really have a different race plan here, it is always the same procedure, but with two seniors in the boat there was a lot more emotion behind it. The only thing we planned for throughout the season was a final 10-15 stroke push, which came through for us today."

Steenstra expects most of the ranks back for the fall next year, and looks forward to working with a group that he says will be evenly spread among seniors, juniors, and sophomores. "Between the classes we will have very even distribution, and every single class will have involvement in the first and second boat," he said. "Next year is a whole different ball of wax."

DI Eights
This fact had escaped me until sometime after yesterday's report was published, but in Friday's heat including Yale and Stanford, both crews bested the Natoma course record. Stanford finished first in that heat, and broke their own record in a time of 6:16.81. It didn't last long, tho; in today's first semi, both Yale and Cal bested that record, going 6:16.54 and 6:16.60, respectively.

(Interestingly, the same thing happened last year - crews broke the Cooper River course record on Friday, then broke the new record the next morning in the semis.)

Both semis developed relatively quickly somewhat into races for lanes, as in each three boats pushed out ahead of the field to make a bid for the three advancing spots, and then duked it out over who would finish where today. In the first semi, eventual advancers Yale, Cal and Virginia seemed never to have more than two or three seats separating them, and each had the lead at some point. Having been surprised by Stanford's sprint yesterday, Yale was not to be caught off-guard today, and took the top spot with their new record time, followed by Cal and Virginia in the other two advancing positions.

The second semi proceeded similarly, with Princeton leading a wedge that included Stanford and USC well into the third 500 of the racecourse. Eventually Princeton and Stanford pushed away from USC a bit as well, and blitzed it down the course together to open a bit of water on USC. No course records this time, however; tomorrow's final from Lane 1 to 6: Yale - Princeton - California - Stanford - Virginia - USC.

DI 2V Eights
The Brown 2V really uncorked one today, throwing down almost harder than anyone on the water today - and beating their own 1V's time in the process (winds were inconsistent, so the comparison is probably for entertainment purposes only). Their row looked like one of those efforts where things are going so well that almost the only thing to do is go harder, better, and faster - and they did. That said, Stanford's time in the second semi was only a second slower, and Stanford looked a little less on a mission today. Behind them the pack looks really tight; it should be a great final tomorrow.

DI Fours
I mentioned yesterday that the Virginia four looks great, and today they did nothing to shake that impression, finishing fully six seconds faster than anyone else in the event. Barring cataclysmic error in the crew, they should leave everyone else scrambling for silver and bronze, and an exciting scramble it will be; again here the field looks very evenly matched.

DI Team Championship Chase
Only two teams have placed crews in all three events into the grand finals tomorrow: California and Virginia. Barring truly bad performances in one of their crews, it stands to reason that one of these teams will take the team championship this year. If you think you have seen this before, you have and how: a few years back, Cal and Virginia tied for the points championship, and Cal took it based on their higher finish in the V8. Don't be surprised if it is that close again this year; the V8's are extremely evenly matched as noted above, and the Cal and UVa 2V's met today as well, and finished a tenth of a second apart. UVa's four, of course, looks almost unbeatable, so they may have a little head start earlier in the proceedings, but it should be interesting.

DII Reps
Today's DII reps held little intrigue after about 500 meters in either the eights or fours events, to the relief of the crews out front. Seattle Pacific and Barry advanced to the grand final in the eight, and Florida Tech advanced in the four.

Important: Note Schedule Change
Due to some problems with wakes interfering with races today - the first semi of the DI fours in particular rowed through some rollers, resulting in a protest that was disallowed - the racing committee adjusted Sunday's finals schedule to add in an extra five minutes before each Grand Final to let the water from officials and media launches settle down. 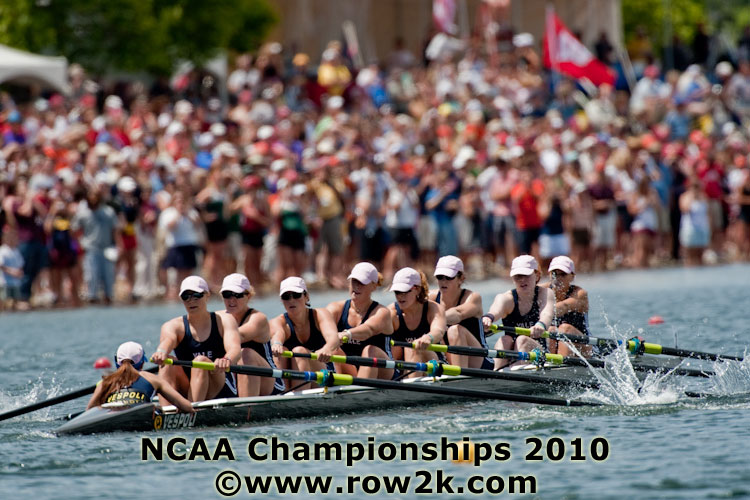 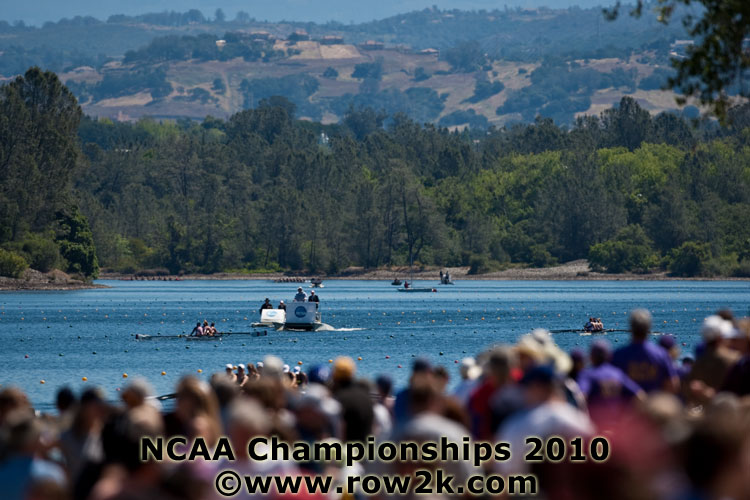 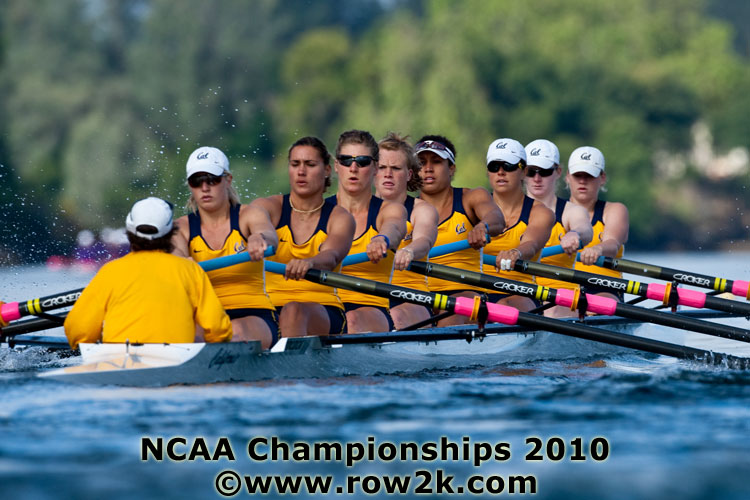 Favorites Fire It Up on Friday 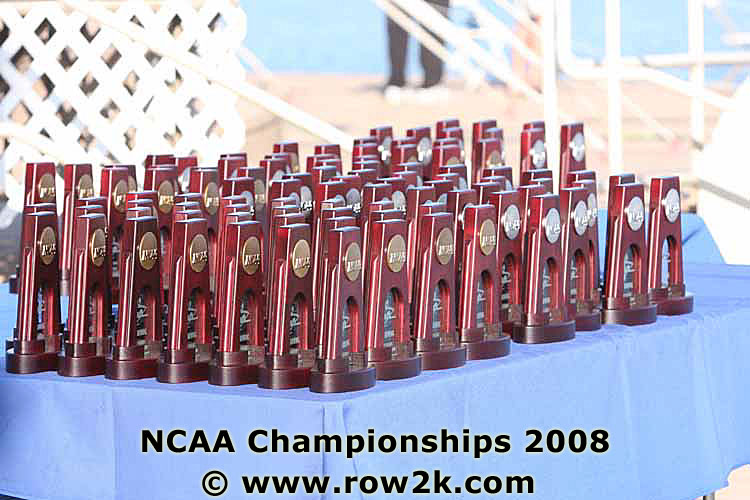