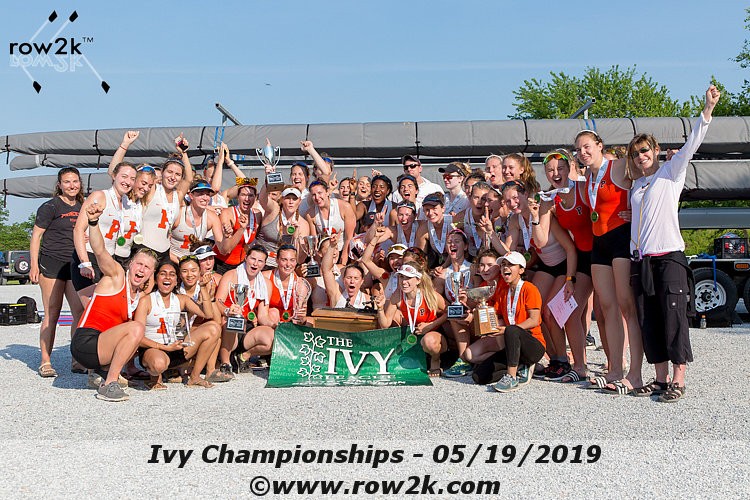 The Ivy League Champs were at the tail end of a long race ticket at Cooper River Park on Sunday. Finals of the CAA (Colonial Athletic Association) Champs, MAAC (Metro Atlantic Athletic Conference) Champs, and Ivy League Women's Championships we all packed into a warm and breezy May afternoon.

The Ivies had changed the way the NCAA automatic qualifier winner was calculated; instead of the NCAA automatic qualifier going to the winner of the Varsity 8+, the league assigned a point system for each race, thus giving each of the three NCAA boats (V8, 2V8, V4) contribution to qualification. There is also an overall points trophy, the Chick Willing trophy, that goes to the overall points winner inclusive of all events, NCAA or non-NCAA alike.

Although not in the NCAA mix, the V4 B were the first to bring some points to Princeton in what could be a "tone setter," the announcer noted, although it was early going for sure. The Princeton 3V8 was next, as Princeton 3V 8+ Stroke Elizabeth Love gave the term "leaving it all on the course" a new meaning, and the team won by a 2-second margin over Yale. 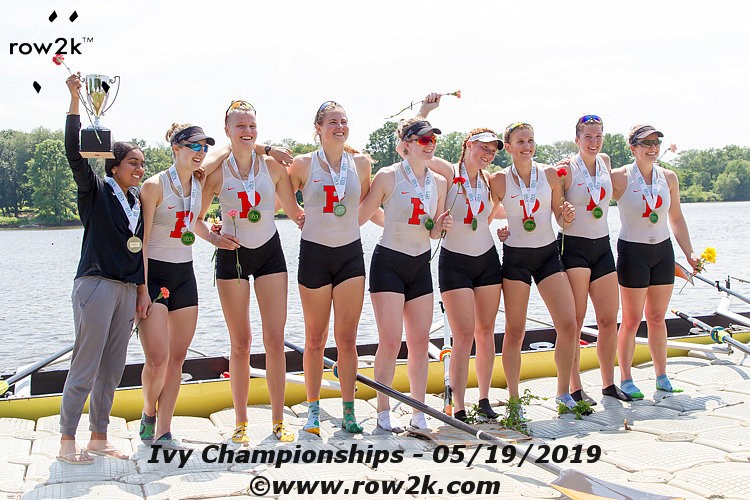 Next up, Brown's C four won a hard-fought race that saw a couple solid lead changes; they weren't able to get in to collect their medals, but happily we caught them a bit later to record the occasion. 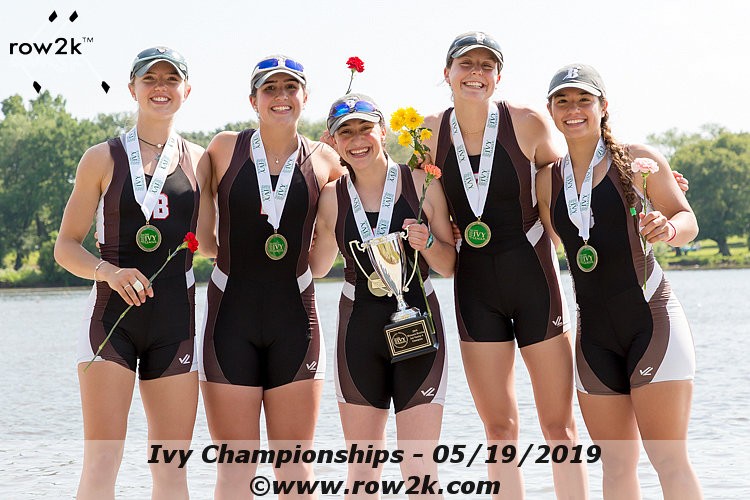 Regatta officials evaluated the course mid-schedule during a break in the racing (row2k took the opportunity to take pics of a bunch of regatta dogs, starting here) and moved the top crews to the lanes on the far side of the course 6-1, with the top seeds taking lane six.

From there, the rest of the day was a Princeton sweep of the gold medals. In the V4, although Brown had a fast start, the Tigers four pulled ahead at about 700 meters into the race and moved to about 1 length up. Brown tightened that margin—pushing to within a bow deck near 250 meters to go, it just wasn't quite enough. 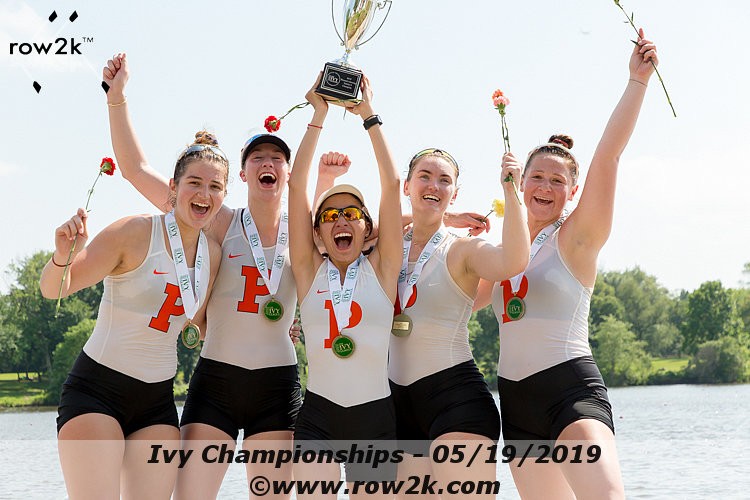 "We had a good race in the heat," said Coach Ryan Ebke. "The goal is to have growth between each piece and practice." The crew felt that between the heats and the finals, there were a few areas where they could do better; "rowing as a collective crew," was one of them. They had that swing going when Brown challenged at the sprint, and crossed the line 1.4 seconds ahead of Brown. "Practice is always competitive; we try to put athletes in places they can be successful," he added.

When the 2Vs came down the course, Princeton, Brown and Yale were almost even at 1000 meters, with one second between them. By the 1500 meter mark, when the spectators moved from watching the jumbotron to watching the water, Princeton had moved out half a boat length and were not settling there. "They felt like they were under siege and they responded," said Coach Lori Dauphiny. "We did not respond to Brown as well this morning, but we responded this afternoon in the middle of the race. We adapted to what we learned this morning." 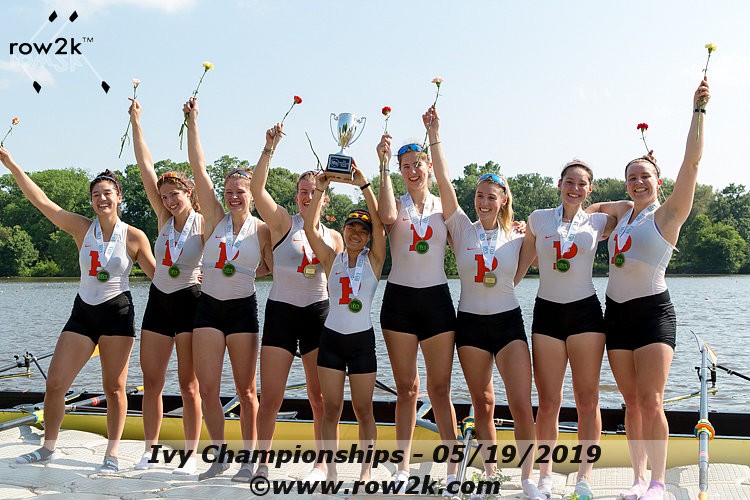 The Princeton Varsity 8 was a three-time defending champs here, and overall, Princeton had won the Ivy League AQ six out of the last seven years. Coming into the final, they had been undefeated on the year, and although unaware of what had happened in the previous races, could ice their team's NCAA spot. The Varsity 8 had five seniors and two captains in the boat, and their leadership showed at their conference champs.

The Varsity 8 was the most dominating race for Princeton crews; having separated themselves from the pack by almost a full boat length by the 1000 meter mark, the race was behind them for second and third when Princeton rolled with long, powerful strokes as they came closer to the spectators 700 meters from the finish. Brown, as they had done in previous races this day, made a strong effort at high stroke rating to come closer, but there was not enough to pass the Tigers. When told that her crews had massive leg drives coming into the last 20-25 strokes of a race, Lori Dauphiny smiled and said, "that's good to hear." Overheard from the crowd after that last decisive race, "It definitely was Princeton's day." Indeed. 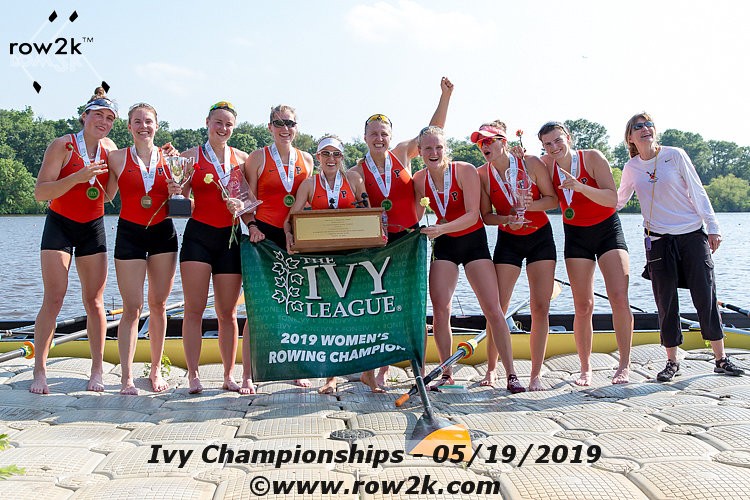 As Dauphiny went down to congratulate the V8, then receive the team award, she turned to the Princeton supporters at the fence and said, "Thank you to the parents, we couldn't have done it without you!" The team seemed like an affectionate bunch, and big hugs were shared on that sinking dock buckling under the weight of the entire team. Just prior, the Tigers yelled a cheer that requires a response, that went like this:

When I say "Lightning" you say "Fast"

When I say "Princeton" you say "Crew" 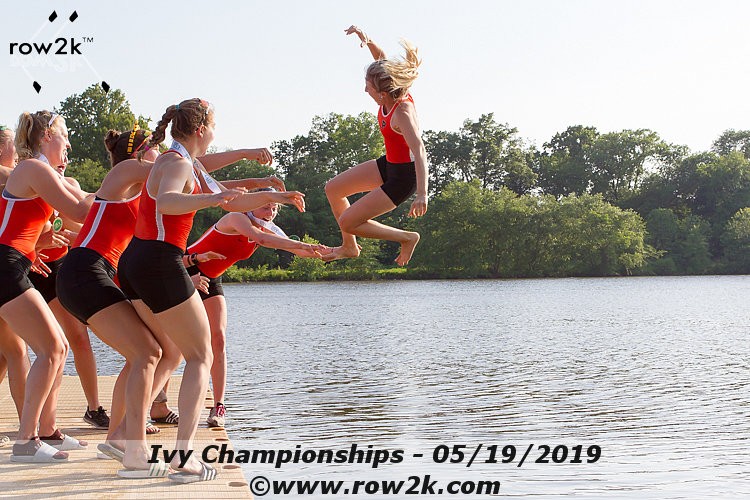 It was fitting, giving the dominance of Princeton on the day. The next step will be Indianapolis for NCAAs in two weeks, and Princeton still has a week of finals.

Of the final race of the day, Dauphiny said "The heat gave them information, and they were ready when they got on the bus, but they did make some adjustments for the final." The crew in general, she says, "Has a commitment to the end result; they took whatever challenge that was in front of them.

"You never know on a championship day. I really wanted our senior class to have the race of their lives and it all came together. This group was one of the closest teams we've ever had and I have to attribute much of the success to the culture."

Two seniors were in the boat for the last four years that they won in the Ivies.

Claire Collins, a member of the V8 for four years, said that "Winning four-straight titles feels unbelievable. Each year is its own journey, so in some ways it's crazy to see them all stacked up like this now. But what makes it better is winning the fourth in the fashion we did yesterday. It takes each team mate's hard work, dedication, guts, and heart to do what we did for four years now."

"Sweeping the Ivy League Championships is no small task, and this team has been incredibly dedicated to making it a reality," Emily Kallfelz wrote in an email to row2k after the race. "Not only is this achievement a testament to the work ethic of the team, but it is a testament to the strength of the leadership from all our seniors….we are a team culture and racing culture that everyone on the Princeton Open Team is incredibly proud of - and we are not quite done."

Which may be the fitting way to end this report. The Princeton women are moving onward to NCAAs, with a strong crew that appears in every way to be ready to race.

Brown placed second and Yale third in all the NCAA races, and based on regular season results would seem to have solid shots at at-large bids for the NCAA. 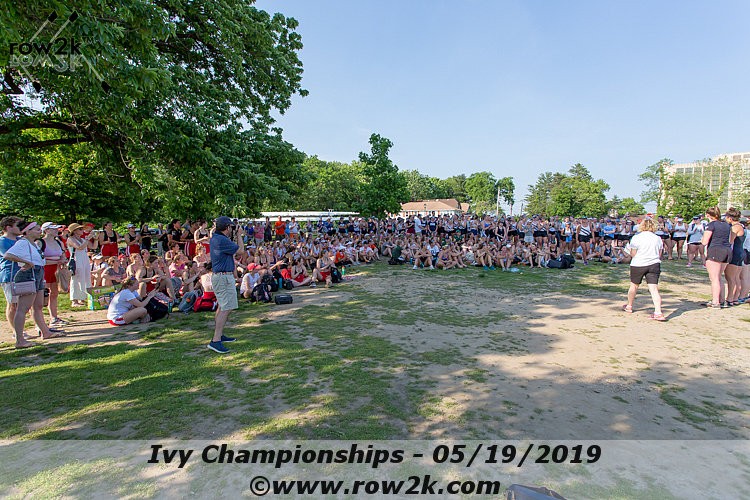 See the galleries from the racing here: