With semis complete, finals are set on Lake Natoma for the IRA Championships

Brown University didn't exactly give any indication that the 2017 IRA Championship would be their chance to make a statement. Not after a string of losses during spring racing.

From their opening dual race against Yale in Providence right though the Eastern Sprints final, the Brown varsity eight seemed off the mark in 2017.

They lost to Boston University, Harvard, Northeastern and Princeton before finishing sixth in the final at Sprints. Saturday morning, Brown helped reveal with the saying "that's why we race" keeps getting uttered as the national championships podium races get closer.

While it's true that the top seeded crews pulled down the best times of the morning semifinals, as expected, Brown was right there with them - finishing within three seconds of semi winner Harvard - and added a little intrigue to the setup for the varsity eight championship tomorrow morning on Lake Natoma. 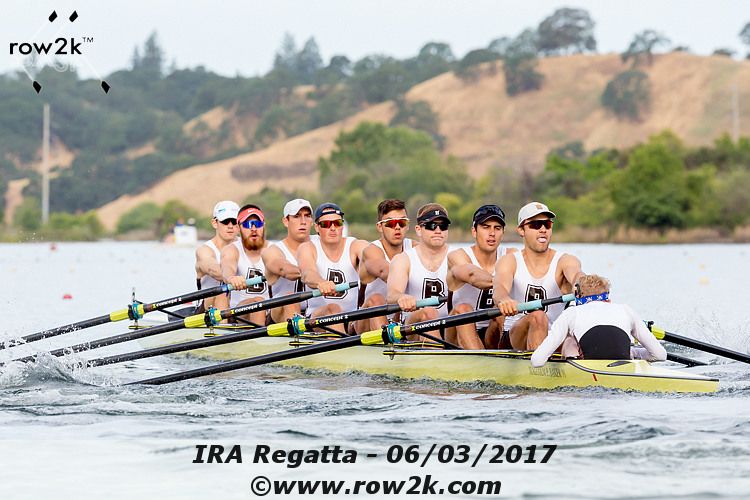 "We made some switches, and the boat has been feeling really good the last couple of weeks," said Brown junior Viggo Hoite. "We just found a really good base in the last couple of days. This morning we had a pretty decent rhythm and it felt really good. At the end of the race, we bought it up and we brought it home. We were a little worried about Northeastern, but we took it away and that was it.

"We're definitely going to enjoy this but not for very long. It's going to be a tough race tomorrow. "We're just going to stay internal and race our race."

The first heat of the morning had Washington leading the way and posting the best time in 5:34.94. Yale crossed second in 5:35.49 and Princeton took the final spot into the Grand in third in 5:43.34.

The times and the way Washington has raced this spring set the men up to shoot for a UW sweep of rowing's two national championships following the women's complete dominance at the NCAA championships last weekend on Mercer Lake. 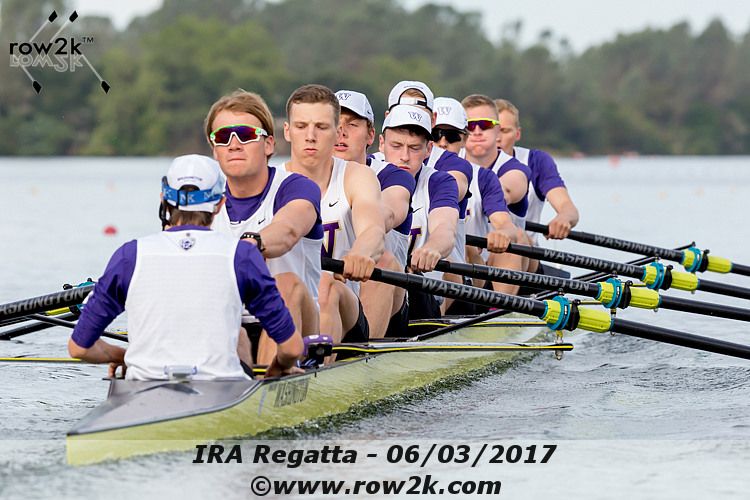 But that brings anyone approaching that conversation back to "that's why we race."

"We're in the Grand final for the 1V and 2V, so it's a job well done this morning," said men's coach Mike Callahan. "We made another step and we didn't have to use it all today to try and make the final. We'll try and have the fastest race we can tomorrow, on the final day.

"Tomorrow is the day we train for. It's the final exam for intercollegiate rowing. So, we're ready. The top four crews, Yale, Harvard, California, Washington are all in strong position, and you see that Brown put it together and they look strong to, so they have some speed in their boat too, and it's going to be a hotly contested final tomorrow."

Based on the results from the semifinals, Callahan is correct. And it will be fun to watch. Cal is the defending IRA champion and finished second in the semi to Harvard.

After the race, Cal sophomore Joachim Sutton indicated that Cal may have gotten off their race plan.

"We were a little bit high today compared to where we like to be," he said. "So, we've got to improve on that tomorrow. After the start, we like to be a little bit lower, and just work there. We're in the final, it's one race at a time, and that's where we want to be. But it's all business.

"Yesterday we won the heat. Today didn't go quite the way we would like it to be, so there is no relief. We just look to tomorrow and we have to take care of business."

Harvard, on the other hand, was feeling slightly better about the morning result.

"It felt really good," said Harvard senior James Johnston. "We just sort or kept everything internal and just executed everything we said we wanted to do. It was still just part of the process though; the job's tomorrow in the final. So we're looking forward to that, looking forward to how we do.

"I think Cal got one or two seats off the start and we just kept internal and focused on our rhythm, and we just locked onto a really, really good rhythm. We got maybe half a length, maybe six seats up and then just sort of rowed it in. I'm really excited for the final tomorrow," Johnston said.

After sitting out the first day of racing, all the women's crews raced their heats and those finals are now sorted out. Stanford is defending consecutive championships and showing signs of nearing a three-peat after rowing to first in their heats with the best time of the two sets in 6:30.80. They will have to keep moving in that direction to finish the job and have Boston University, Harvard-Radcliffe, Princeton and Georgetown to get though first. 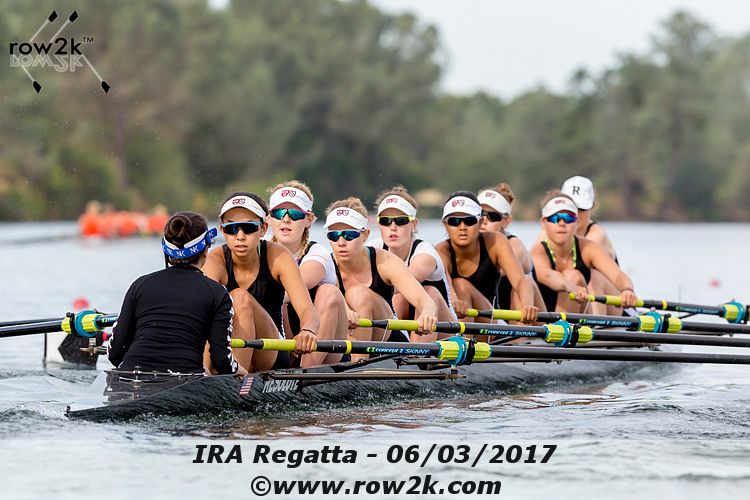 "It's very exciting," said Radcliffe coach Sarah Baker. "We're looking forward to the final. It's going to be a barn burner. We've been going head-to-head with these crews all year long and it's going to be interesting to see who found the next gear over the last month. We have a general sense of what we're facing. Here and there you see some changes and adjustments. We'll see."

Championships are always a time for seniors to get one last shot at a collegiate podium. In some cases, it's a chance at redemption, and for others it's a chance not just to hang another medal on the wall, but it can be a nostalgic, magic moment. 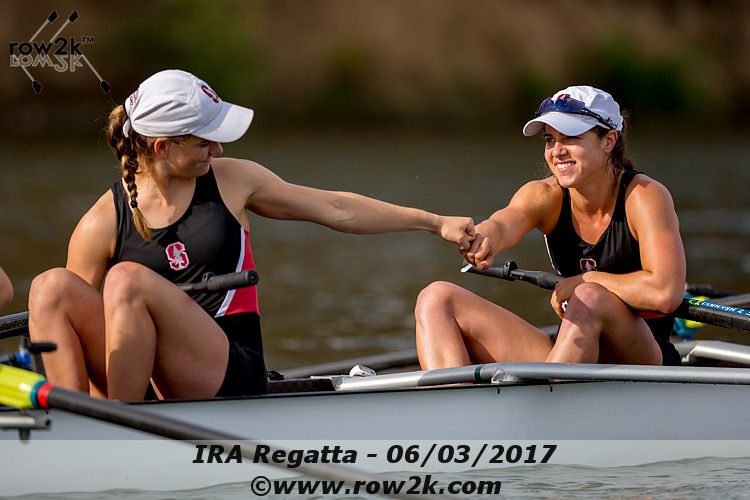 "It's weird," said Stanford senior Christine Cavallo. "Rowing has been a big part of my life for a while now, so I'm just making sure I soak it all in. I've got two-thousand more meters to be a Stanford athlete.

"That's going to hit me probably really hard next week when I'm getting ready to go to practice and I realize that there is no practice. I love this team. And this is such a good note to end on with these girls," she said.

"So, I'm really excited for one more time down the course tomorrow," said Cavallo. "At this point, I have friends in all those boats now, so it's personal, looking over at people I absolutely respect and I have gotten to race two, three and four years now. It's just a little nostalgic just being on the course with them for one last time."

Yale senior Nate Goodman has been in rowing as long as Cavallo. Both were members of U.S. junior national teams and he also has shared experiences with the other members of the crews racing in finals tomorrow.

Goodman, however, is still looking for an IRA championship after two disappointing attempts, both of which came when Yale was expected to reach the podium.

"If you had told me when I was a freshman that I would accomplish everything I have accomplished by now, I would be pretty happy. But, it still feels like I have a little unfinished business," Goodman said.

"I like to reflect on my career sometimes, but it doesn't help to always be looking back, thinking I've done this or I've done that. I like to think that I am very focused on the future and taking the lessons of what I've done rather than getting complacent."

For the past two years, Goodman has stroked the Yale varsity eight and started the year that way. This season, he was moved into the middle of the boat and is rowing in four-seat. His reaction to the move earned him high praise from coach Steve Gladstone.

"He was a major player in this group in its renaissance, in '15 and '16," said Gladstone. "Quite frankly at this juncture in his career, he's happy to be back in the middle of the boat. And he'll likely go back and stroke boats on the national team.

"But he understands that this is the best thing for the boat and his response to moving back to four seat made our season possible. If he had pouted, become belligerent, we'd have been toast. But he didn't. What he said was 'coach, I just want to win'," Gladstone said.

"I don't really care what seat I sit in as long as the boat is going well," Goodman said. "I'm just more into being a good four man. We don't have the same expectations that we did last year or even the year before, which is a good thing," he said.

"We're just focused on making our own boat go fast, not really worrying about how other people are doing. And we're focused on stepping on through the regatta and if that gets us a win that's great, but as long as we have the best row we can, that's what I care about."