All the pageantry of the IRA Championship was in full display this morning on Lake Natoma. The spectators and support tents were up and filled with family and alumni wearing team colors and buttons proclaiming their allegiance.

Crews launched to race and teammates cheered them onto the water. It was as it has always been.

But there was one difference that was not lost on the coaches and athletes who have raced and coached in the storied regatta.

For the first time, the freshman boat was not on the schedule. Once a staple of rowing programs, and a tradition of the sport, the freshman eight has been forever lost in the age of serious recruiting and schools needing the ability to have those first-year boat movers in their top crews.

The move to change the rules that restricted freshman from rowing in varsity events was made years ago and the inevitable followed. Freshman eight subscriptions dropped to the point that the event was a straight final with five to six boats. And now it is gone. For those who coached the event and rowed in it, the absence brought a wave of nostalgia and discussion.

"We were talking about that last night," said BU head coach Tom Bohrer. "I think the whole freshman thing had its pageantry at one time and it definitely had its presence. We were just talking about just how the makeup of the teams were for that first year of just rowing in a freshman boat, having its own coach and having its guys stick together.

"But I just think that this sport has kind of evolved from that now. I was really sentimental about it at one point," he said. "But now I think I've moved on from that.

"I think everyone that is coaching now at this point has gone through the freshman kind of cycle, but I think we've kind of outgrown it now. And I think the way we're doing it now, the 3V boats are really fast, and that's where we are now and we're not looking back on it."

That might be the point of a lot of the coaches here now. But, not all. Both California head coach Mike Teti and his assistant Scott Frandsen would like to have it back.

Frandsen was a freshman recruit from Vancouver, Canada, when he first arrived at Cal, and he credits his freshman experience for helping launch one of the most successful Canadian rowing Olympic careers. 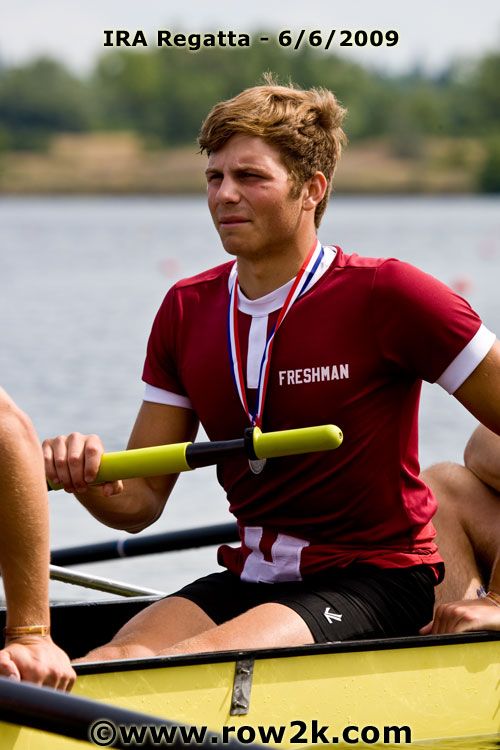 Freshmen as a class of their own

"If I had been thrown in the varsity program then, I would have been totally lost," Frandsen said. "I definitely needed that stepping stone year. I think we do a good job of keeping the freshman group together for most of the year and bumping up guys that can affect our top two boats.

"We try to keep that group together to try to bond as a group, but to also to get them into college rowing. It's a different level than high school rowing. Sometimes, if you throw some of these new raw guys right from a high school program into a varsity boat, they can get kind of lost.

"But if they get to be the man in that smaller group, then that momentum can start to build through the year," he said.

Teti agreed, pointing to the lifelong bond and friendships that were made in freshman crews.

"I was for keeping the freshman. Honestly. I think it was a good rule, but you have to change with the times," he said. "All the sports were successful doing it. That's just the nature of the times.

"It's a bummer. I just think it was a good event and I hated to see it go. If you go around to all these teams, it seems to me that all their closest friends are all the guys they rowed with their freshman year. It just seems to be that way."

For Navy assistant John Flynn, it's not a change he is going to get used to anytime soon.

"Yea, we're really disappointed that there is no freshman boat," Flynn said. "We really liked that tradition. We kept our freshman together last year and we were really glad we were able to field a boat and to win a medal last year. But it's kind of bittersweet not to have it here.

"Plebe rowing is a big thing at our school," he said. "It's how we develop our walk-ons. It's how we bring our recruits into the program. We keep them together in the fall and we develop the guys as a class. And not to be able to race those guys as a class is really sad. It's sad to lose that tradition."