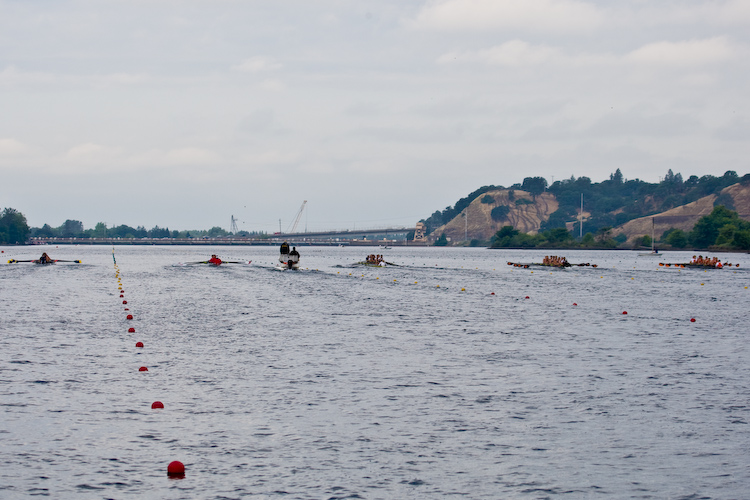 Heat 1 of the Varsity 8 blasting off the start

With temps nearly 50 degrees lower at sunup than they were just a few weeks back for the Pac-10 weekend on Lake Natoma, it was so cold that the launch drivers and announcers grabbed coffee and ran to sit shivering in their cars with the heat on as soon as racing was finished for the morning, and then headed for their hotels (and the local Target in one case) to get more gear before the afternoon reps.

The cool temps were accompanied by the classic Natoma cross headwind, which inspired regatta officials to redraw the lanes to seed from Lane 1 to Lane 6, instead of the usual middle-lanes method that was originally planned. This particular wind tended to reinforce the seedings as well as exacerbate margins somewhat such that the morning provided only a few surprises, but a fair number of spread out races.

Varsity Eights
In the Varsity eights, the first heat saw Cal row away from the pack early on, a good tactic given what was going on a length or so behind them in the two-to-advance format - Cornell and Northeastern exchanged punches for the full 2k, with Cornell emerging victorious only in the final couple hundred meters to take the second, a foot or two ahead of Northeastern. The margin was small, but the outcome was immense; Cornell goes straight to the Friday semi, while Northeastern had to come back 5 hours later for the Thursday afternoon reps.

In the second heat, at about 1250 down race announcer Fred Schoch noted that Washington "looks like they are on a steady state row," and with both Washington and Wisco rowing in the low 30s, he was really on to something as both cruised into the semis almost without tasting any lactate beyond the finish line.

The third heat might have proceeded the same way, but after spotting Brown some water in the early part of the race, Harvard kept the pressure on relentlessly in the second 1000 of the race despite the fact that both crews were well clear of the rest of the field and comfortably in semi qualifying position. After having been rowed down by Brown a few weeks back at the Sprints, Harvard seemed intent on reversing the outcome this time, and bumped the rating to 38 with 500 to go, and then to 40 a couple hundred meters later. Brown responded in kind, and spectators were treated to two boats fighting mostly over bragging rights all the way to the line, with Harvard coming out on top by a couple seconds. Harvard clearly wanted the win and celebrated their revenge - after crossing the finish line, their coxswain punched the water victoriously, oarsman banged on the gunwales, and crew members cheered each other on.

Boston University's late season momentum suffered no setbacks today as they blasted out of the gates hot on the heels of Stanford, busting away from Columbia in the process. Stanford controlled the race from the front, and BU allowed no challenges from behind as crews in red took the two advancing spots, leaving the light blue to race in the reps. Columbia came through the reps last year to make the grand final, however, so don't count them out quite yet.
The sun came out and temps cruised upward 20 degrees, and Lake Natoma looked much more itself for the afternoon reps, which featured three four-boat races and one three-boat race, with the spots in the Saturday morning A-B semis going to Northeastern, Dartmouth, Syracuse and Columbia, from whom the racing demanded mostly fairly workaday efforts, with perhaps Dartmouth getting the most significant challenge of the afternoon from George Washington.

Second Varsity Eights
In the second varsity races, it was winner take all, with the top finisher in each heat headed straight for the Saturday final, and everyone else to tomorrow's reps. In all three heats, the winner eliminated any sense of suspense fairly early on, with two of the eventual winners leading the whole way down the course, and Brown spotting BU a few seats in the first 500, reeling them in by the 1000, and taking over for the last third of the race - all three won their heats by open water.

Frosh Eights
The frosh eights reliably provide a bit more drama, and today was no exception. The frosh eight is also a single-advancement gambit, and in the first heat Cal and Harvard raced within a few seats of each other for what seemed like a very long 1600 meters before Harvard laid on the oars a bit more to grab a 3/4 length lead by the finish to avoid tomorrow's reps. The Cal crew gave it a good go down the stretch, but could not match Harvard's late speed.

In the second heat, Brown got just enough of a cushion over Cornell so that no one was comfortable, and two crews traded tens and matched moves all the way down from there - so closely that Brown's early margin ended up to be the final margin.

The last heat of the day was over almost before it began - Washington's frosh eight had open water on the field before the 500 gone mark. The crew famously has a 2008 Olympian and a U-23 member in their mid-20s in the stern pair, and no one in the heat or the event has the stuff to match that kind of talent. It might be that few crews in the entire regatta can match that kind of talent; stats watchers have been comparing the UW frosh times to the V8 times all year long, and will be watching to see if these frosh are actually the fastest crew in the regatta - or if not the fastest, how they stack up against the clock in the end.

Fours
Due to the complete absence of informing results in the fours, both events were done as blind draws, a necessary but brutal evil given the unforgiving one-to-go advancement progression. You can check the results to know almost as much as I do about the crews in the event, but the racing wasn't without intrigue, with a couple photo finishes in the course of the racing.

To explain the difference between the two events, the Open four is a coxed four that is open to any program that qualified both their varsity eight and their frosh 8 for the regatta, and must include at least one frosh and one upperclassmen among the oarsmen in the crew; the coxswain can be either a frosh or an upperclassperson, but does not count against the above numbers.

The Varsity four is open to any IRA affiliated college or university; this event was maintained by the new-format IRA to be able to offer slots to those programs that wanted to be part of the new IRA group, but might not yet be capable of qualifying for the big boats. Only one entry per university is allowed. 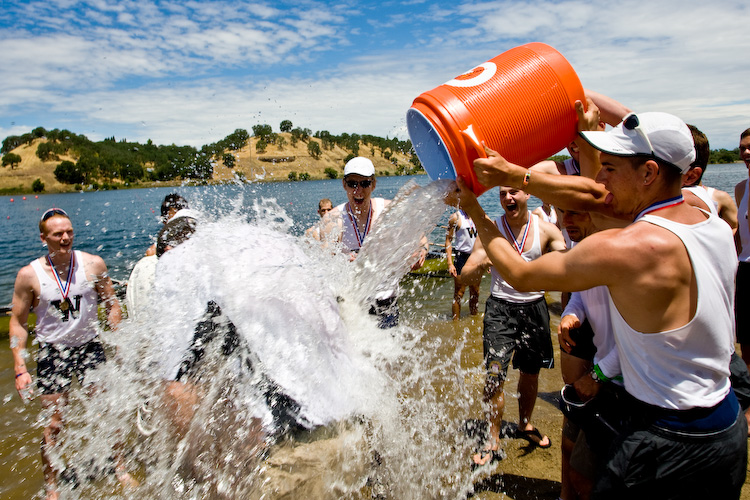 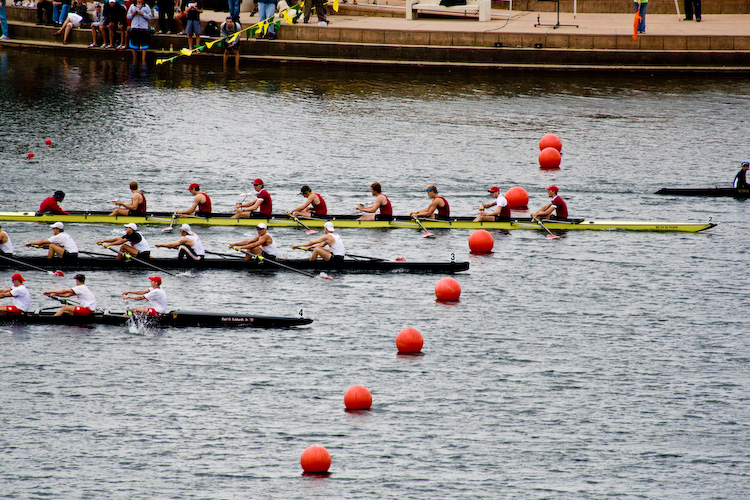 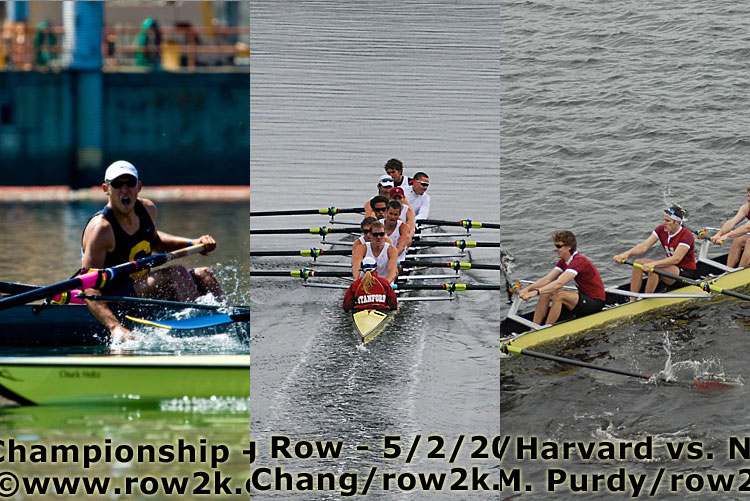 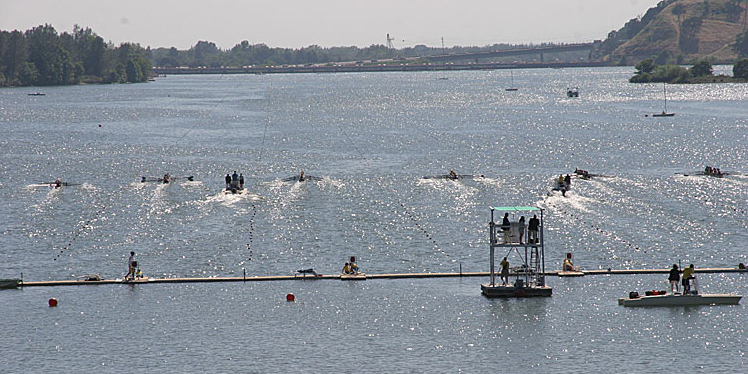