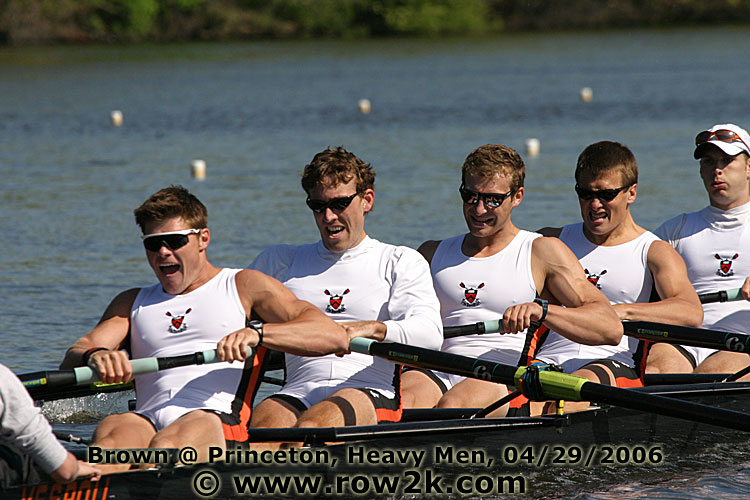 Headed into the IRA, most observers (and the current polls) still give the edge to the Princeton Tigers. There's no doubt that Curtis Jordan's crew will look to improve on 2005, when the Tigers raced at their absolute limit, only to have Harvard row just better enough to win. By most measures, the crew is destined: ranked first all year long, undefeated, all seniors, and almost to the man the same crew that went undefeated and won Henley as freshmen, this crew has waited 3 years (and several trips down the course as bridesmaids to Harvard) to return to the top of the podium.

Harvard did not (and likely will not) go quietly, however. Lineup changes yielded a fairly young outfit at Sprints (sophomore stern pair, whew), and by all accounts, selection at Newell did not cease after Sprints. With a fairly dominant JV to reach into (indeed, '05 IRA National Champ stroke Adam Kosmicki was in the JV at Sprints), tinkering could yet lead to more speed for the Crimson, and perhaps a repeat of 2005's nuts racing in the V8. Princeton is very likely not taking their two victories of Harvard for granted this year.

Perhaps the biggest news of the impending IRA regatta is that the Stanford men, seeded #3 in the V8, have withdrawn from the regatta over a tussle regarding an oarsman in said highly seeded eight; the crux of Stanford's withdrawal is this: an oarsman in their V8, in his first year of college, was classified as a sophomore by Stanford for academic purposes by virtue of performance in advanced placement courses in high school; however, by the IRA's definition, he is a frosh, and frosh, per the rules of the IRA (essentially the old NCAA rules that still govern men's rowing) are not allowed to row in Varsity events.

Rules being what they are (Northeastern V8 in '96, anyone?), it's nearly impossible to plead ignorance these days. That said, it seems a little strange that what is already at best an unfortunate situation is being inflated into a full scale broadside against the current state of men's collegiate rowing. You might ask how many frosh rowing in the Freshman Eight event would make for faster varsities - sometimes much faster varsities - were they also allowed to row up a class.

So, on the eve of the regatta, the Stanford V8's withdrawal/boycott looms large, though how large is impossible to say clearly; Stanford celebrated what was by all accounts their best season in 33 years, with wins over Washington at the Windermere Classic, and over Cal in a less than stellar field at the San Diego Crew Classic. Since then however, Cal has had the Cardinals' number out west, besting them both in the dual meet and at Pac-10s.

With Washington on a bit of a down trend this year (eight seconds behind Cal at Pac10s, the same margin as at the Cal/Washington dual meet on April 22), Stanford was the clear #2 from the west coast, and would have had a good shot to make the IRA final, though Stanford coach Craig Amerkhanian's assertion that Stanford's withdrawal would benefit other crews ("We're hoping our academic contemporaries from Harvard might get a medal now") seems a tad unfair to crews that might very well have medalled under their own power.

(Stanford will in fact be attending the IRA, rowing in fours. The Varsity will later race intact at the Royal Henley Regatta in July.)

On crews to who will be racing in Camden: besides Cal and Washington, a pretty tight gaggle of Eastern Sprints finalists will be fighting tooth and nail for the spots in the final. Only 10 seconds separated the top 6 crews, with Princeton's 2.5 second margin of victory making up the biggest gap in that particular field (the 8/10s from third placed Brown and fourth place Northeastern was the tightest). After a few years of getting used to fairly dominant crews from the East (read: Harvard), this tighter field suggests either that there's greater parity in the East and a large number of Eastern crews are faster, or perhaps that the Eastern crews simply aren't as fast this year.

Behind (or maybe between) Princeton and Harvard, Cal will look to make their mark, although Brown, Northeastern, Wisconsin and Washington will all make noise. In the V8 eights, the Cal/Washington and Brown/NU matchups look to be those where the top crews will test each other. In what could be another gnarly trip down the course, Heat 1 of the V8 sees Princeton, Yale and Syracuse reprise their matchup from Heat 1 of the V8 at Eastern Sprints, where Yale punched out Syracuse at the line for a spot in the Grand, with both crews probably a little closer than Princeton may have been comfortable with.

In the JV8, Harvard, Cal, Washington, Yale, Wisco and Brown are the top 6 crews. The one-to-final progression in the JV eight guarantees some great racing, and the all-EARC heat of Harvard/Brown/Northeastern will likely be entertaining enough.

The freshman eight also traditionally sees some great racing at the IRA. Penn's frosh won their first sprints since '97 a few weeks ago, but will look to avoid the misstep of that '97 crew, which ended up in the Petite at IRA after their Sprints win. In the F8, with two to advance, the hardest racing sometimes comes between second and third, although the Harvard/Northeastern heat will likely see a repeat of the punch-up that allowed NU to squeak by Harvard for the silver at Worcester a few weeks back. Princeton and Yale, at the back of the Grand in Worcester, face off against Washington and Cal, respectively.

Lurking in the Cal/Yale heat is a fired-up Brown crew that went into the Sprints ranked second, but fell to Wisco in the heat and were relegated to the Petite. The Yale frosh will likely focus on the crew on their port side in the heat.

The lightweight eights at IRA are always good for a surprise; 2005 saw the end of Harvard's streak and a surprise run from Penn; given Cornell's run to the top at Sprints a few weeks ago, the IRA likely has a few other surprises in store. Sprints champs Cornell, Harvard, Columbia and Penn race in one heat Sunday morning, with Navy, Yale, Dartmouth and Princeton the likely bringers in heat #2. Three crews advance to the afternoon final.

At the top level, the Women's lightweight 8 has a little bit of the feel of Yankees/Red Sox; these crews know each other very well. Princeton/Radcliffe having raced 4 times already this year, and both have won at Camden. Wisco comes in as the top seed in the WL8 by virtue of winning Sprints (Sprints top seed Princeton had a very bad day on this very course at EAWRCs, finishing out of the medals.). Radcliffe and Georgetown are at #2 and #3. Much like the small boat events, the field in the WL8 is one of the more cosmopolitan, boasting crews from the east, midwest, south, and west.

Did we say small boats? After the eights, the racing program at the IRA is a free for all, with pairs and fours of various flavors all hitting it hard. The small boat events are where some of the smaller rowing programs on the US collegiate scene get a chance to shine, along with the 2F/3V guys that get to pull oars in the absence of lower 8s events. That said, the racing is incredibly high-quality right down the line, and as close to an open men's collegiate championship regatta as currently possible. 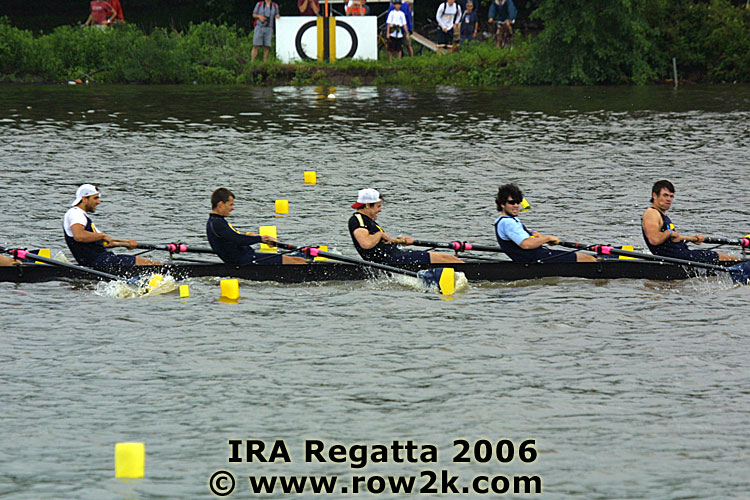 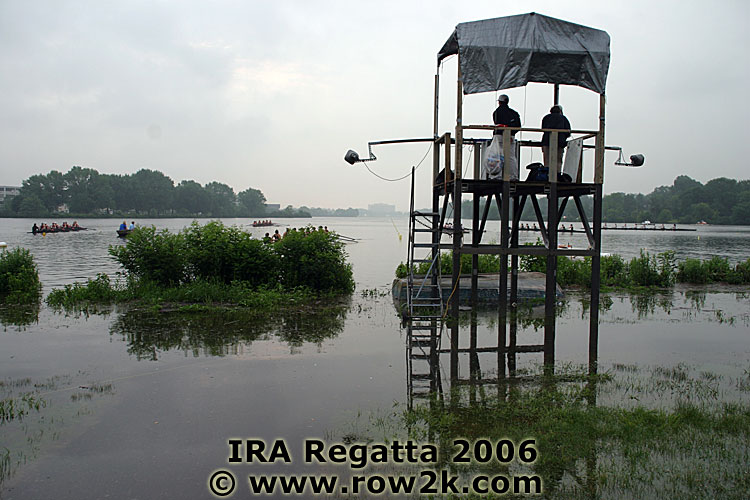