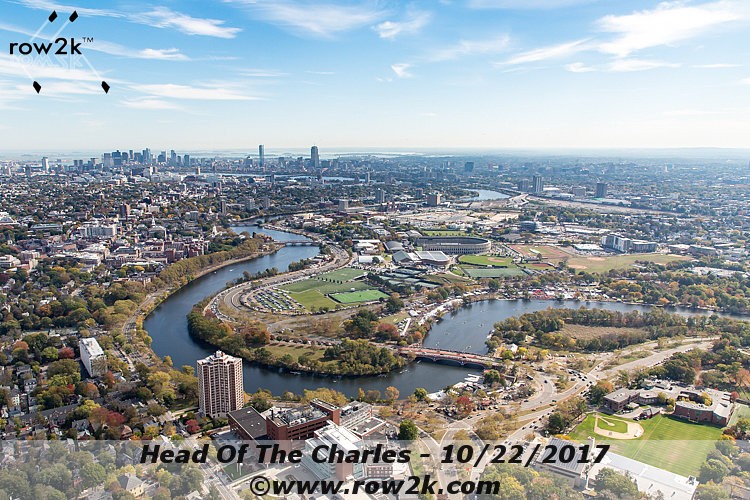 The week before I raced my first Head Of The Charles Regatta (HOCR), I hardly slept. I had heard first-hand accounts and read stories online about the harrowing course and was convinced I would smash bow first into a bridge and end my career as a coxswain.

Did I mention the Charles River was my home course?

I made it through that first race, and eleven more, mostly in one piece. Over the years driving the Charles River I've picked up some tips and tricks that will help you go from a coxswain hanging on for dear life to one who feels confident and can execute a solid race on the famous 7-bridge course (many claim that the HOCR course has 6 bridges, but the BU bridge is actually two separate structures - a railway bridge underneath a car/pedestrian bridge. One can exist without the other, therefore two bridges).

This is not meant to be a comprehensive guide on every turn and point on the river, but one that helps you consider some approaches to the course. There are so many different ways to steer the course well and a few ways to do it terribly.

In the immortal words of Scar: Be Prepared.

The key to the HOCR course, as with most races, is preparation. If, like most visiting programs, you are launching from the Finish Area Launch Site (FALS), you'll want to take some time figuring out where your boat is relative to the dock you're supposed to launch from and what's the best route to get there. 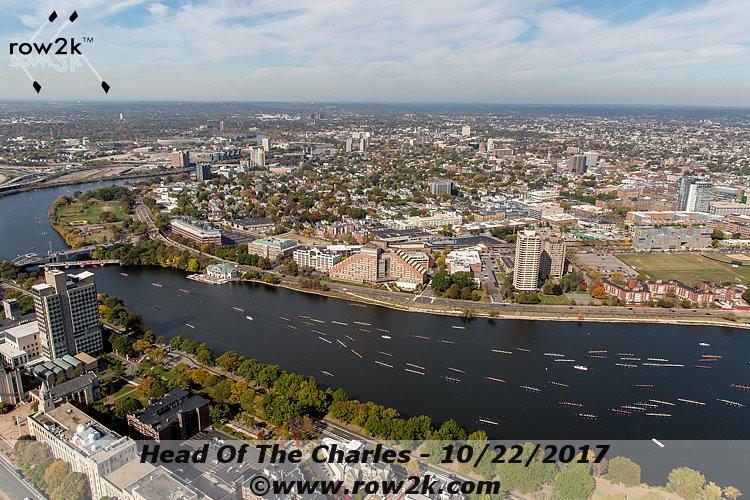 There's always a lot going on in the basin

Be prepared for a stop-and-go warmup on your way to the basin. You'll be hearing officials ask you to stop at certain points... so know your bow number so you can respond quickly. Raise your hand high to indicate you hear the officials. There is a lot going on so a quick indication is important.

When you enter the basin, you'll be following a counter-clockwise traffic pattern upstream of the Mass Ave Bridge. If it's a windy day to begin with, the basin will be more blustery than other parts of the river, so keep that in mind when shedding layers during warm up. Listen for officials calling you into the queue. If you're a low bow number in the race they may have you queue up earlier, while later numbers might be sent for another spin in the warm up area before being sent into the chute. Odd bow numbers stay toward Boston (port side while racing. Even numbers, you're on the Cambridge side (starboard while racing). 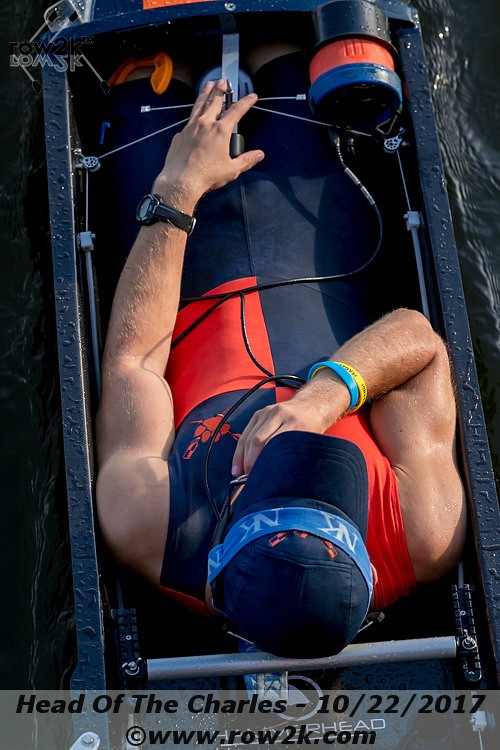 Drive it safe, drive it fast

Once the race begins, keep in mind that based on how often you are passing/being passed, where you are in the field, the number of boats around you at any given moment will change the exact course you take. These are just a few simple reminders to keep in mind to give you and your crew the best chance at a fast course.

Before covering the course, I'm going to take a hot second to talk safety. HOCR has some challenges that make safety of utmost importance - namely bridges. Now, I'm no physicist, but I feel confident reminding all of you that there is a finite amount of space between bridge arches. No matter how hard you hope, that amount of space will not expand to allow more boats in that space. If you try to fit more boats between bridge arches than the finite of space allows, you will clash - oars to oars, oars to boat, oars to rowers - and your clash will slow you down. Plus...you don't want to be the coxswain pulling up to the dock with a gash in your boat, or worse, your rowers.

So, when in doubt, throw in a paddle or pause if necessary. Take it from someone who called her boat down to a paddle more than once last year, and still won the race and set a course record.

So, Safety First. Now, some words on the winding Charles course:

You'll take off just in front of the BU Boathouse and head straight for the double railway/BU bridge combo. There's no passing allowed before the bridge(s), so watch yourself. Since you're the coxswain, take a second to look up at the tagging on the railway bridge - every year it gets a new slogan just in time for HOCR. Don't look too long because you're going to want to position yourself for the inside of the turn on Magazine Beach as you exit the bridge(s). Watch out for getting sucked toward the Boston shore during the Magazine Beach turn and Powerhouse stretch. The river is a bit wide, and you really don't want to add meters that early in the race. 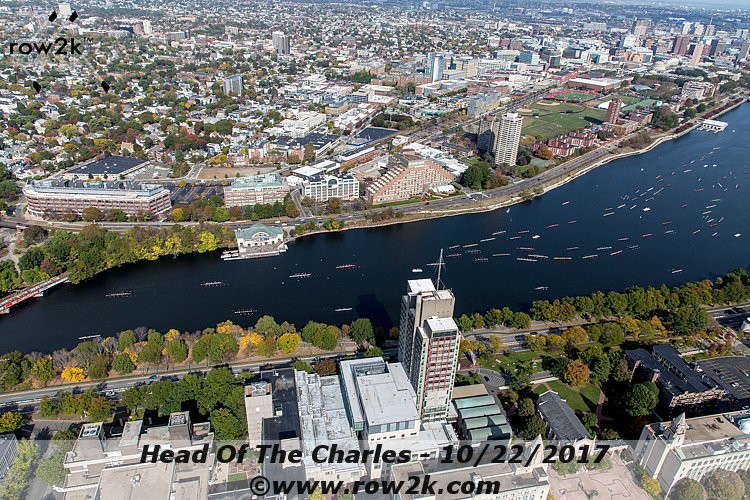 Through the starting chute...and no passing before the BU Bridge!

Throughout the whole course there will be orange buoys on your port side, and at a few different spots (Magazine Beach, Eliot Turn and Finish Line) there will be green buoys on your starboard side. Where there are no green buoys, you can go as far to the Cambridge shore as you like. Keep your hull between these buoys to avoid penalties.

At the River Street and Western Ave bridges, which are in the so-called Powerhouse Stretch, the course's only real straightaway, you can take the right or center arches. Some of that decision will be made based on traffic. Just between the two powerhouse bridges you'll hit the one mile marker, indicated by a painted stripe on the retaining wall and usually by a triangular buoy. 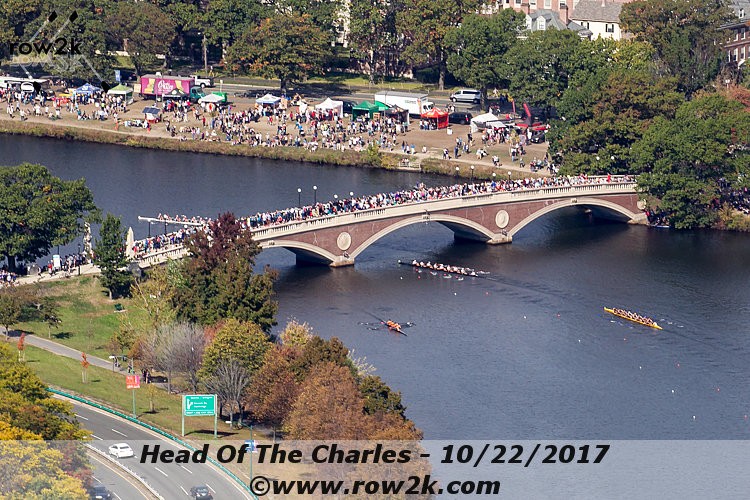 Line yourself up & through the Weeks Footbridge

The famous Weeks Bridge 'turning tree' has in fact turned its signature golden hue just in time for the regatta. Many coxswains use this as gauge to begin their Weeks turn. As much as you can have the turn done before going under the bridge, it will help your point to the center arch of Anderson (avoid the right arch, that's a 60 second penalty). In an ideal world, where there are no boats nearby, keeping the port blades just off the upstream corner of the bridge is best.

From Anderson to Eliot Bridge

Watch for traffic between Weeks and Anderson since arch use is limited. Reiterating the safety reminder here: slowing to a paddle or pausing for a few strokes is not only OK, but often the safest and most efficient choice. Clashing with another boat or bridge will take more time than a quick pause, and you can get penalized if the umpires interpret the accident as interference. 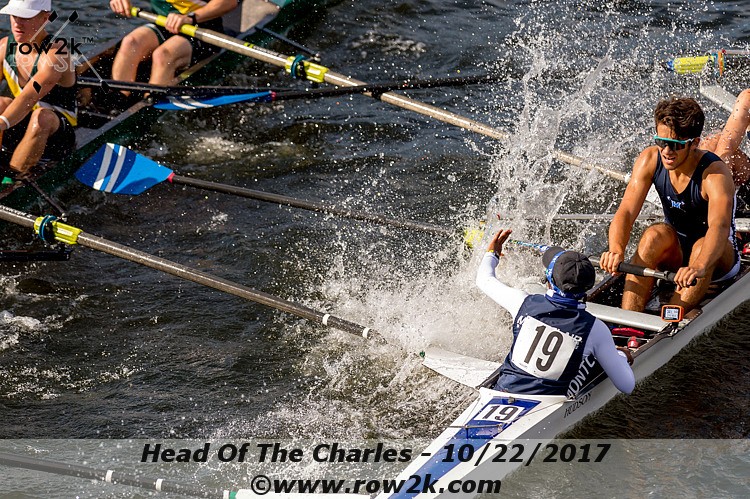 Stay safe out there!

Between Weeks and Anderson you want to be very cognizant of the crews around you. If you're driving a bowloader that means having a line of communication with your bow seat to find out who is around you. In the fours events, clear communication is essential both within your boat and between you and other crews. This stretch can be dicey so you need to make clear to your crew what you need them to do at that moment - whether it is to accelerate to take the arch, or to throw in the dreaded pause to avoid collision.

As you enter Anderson you'll be making a bit of a turn toward starboard so keep that in mind regarding spacing between crews. If there are crews around you, be careful that you do not set up to get into a collision on the far side of Anderson; this can happen when a crew that is hugging the Cambridge shore tries to go through the bridge with a crew that took a wider line and has already started the turn. There are heaps of t-bone collisions on that far side of Anderson every year; don't let it be you! I once entered Anderson three 8+'s wide during the Charles...and I'll never try that again. 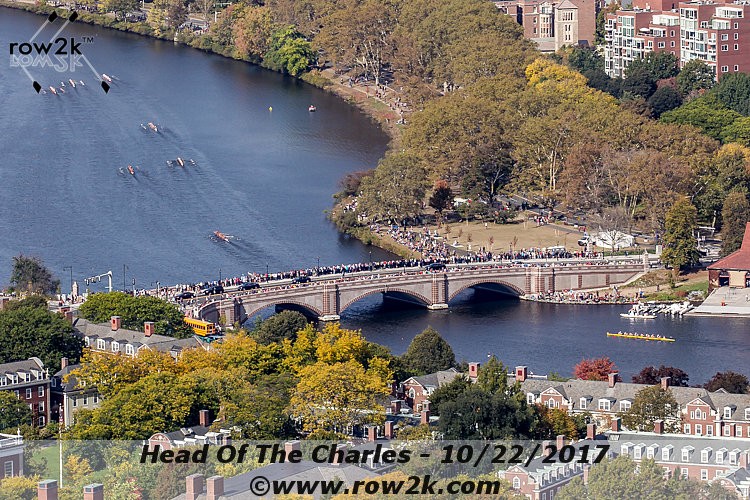 Don't head towards Boston out of Anderson!

Now for THE BIG TURN. This is the time to *safely* get aggressive to *safely* aim for the inside of the Eliot turn to *safely* have the fastest course. Don't let yourself get pushed out to the Cambridge shore, unless you want to take the long way home. This year there will be a string of green buoys on the Cambridge side creating a travel lane for Cambridge Boat Club crews to go home. Watch out not to cross these buoys! 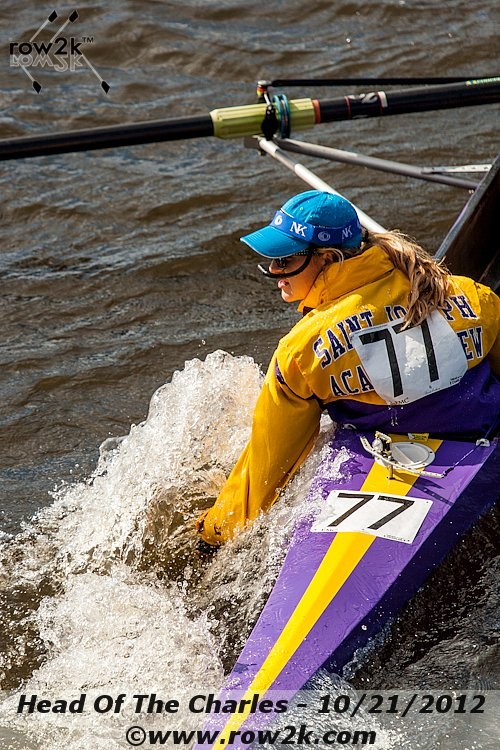 The handbrake turn is not recommended

Pro tip: your blades can go over the buoy lines but your hull (including bow ball) cannot under any circumstance. Watch out on Eliot because it's a double buoy line meaning the practice crews are staying to the right of the white buoys and racing crews are to the right of the orange buoys and in between is no-(wo)man's land. And by that we mean penalty land, so stay out. On a good day when the buoys are in alignment you can actually race with them right under the riggers, but if even one buoy is out of place you run the risk of a buoy penalty (5 seconds for the first missed buoy, 10 seconds for each subsequent one).

While we're talking about the Eliot Bridge, let's have a word with each other about the famous (infamous?) hand-rudder maneuver. Listen up - unless you're literally missing your rudder, it's a bad maneuver. It adds considerable drag to your boat slowing the hull down. If you take the turn correctly, you won't need it in most cases. If you're totally off course, drop a port or two and really get those starboards cranking the hull around, but get your hands out of the dirty water. 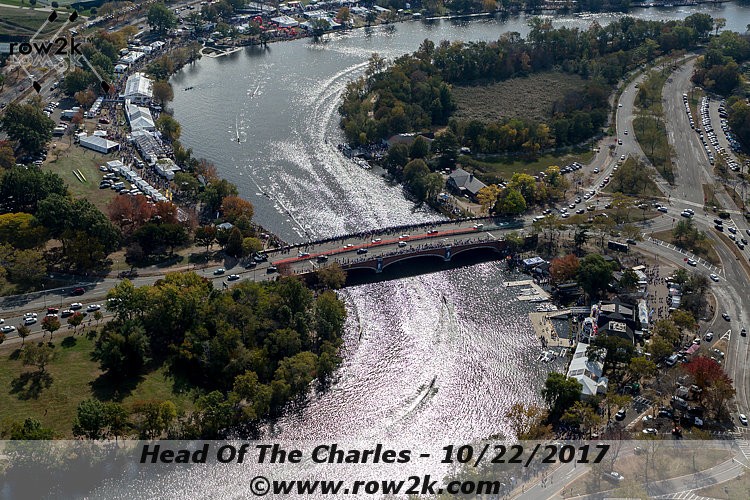 From Eliot Bridge to the Finish

Through the Eliot Bridge is one of the most important maneuvers of the course, in my humble opinion. Like the Powerhouse stretch leg, the stretch between Eliot and the finish line is wide and you can easily get sucked toward the Boston shore, needlessly adding meters to your race. Ideally you have your starboard oars just off the Belmont Hill/Winsor Dock. You'll know which dock it is because it will be swamped with people, one of the best views of the race! There is a buoy right off the corner of the dock, so watch out not to hit it, but if you get that turn and stay close to shore you're in good shape. A hundred meters before the finish the shore moves out again on the Cambridge side. This time, don't follow the shore line. Aim for right between the two finish line buoys, and finish strong. 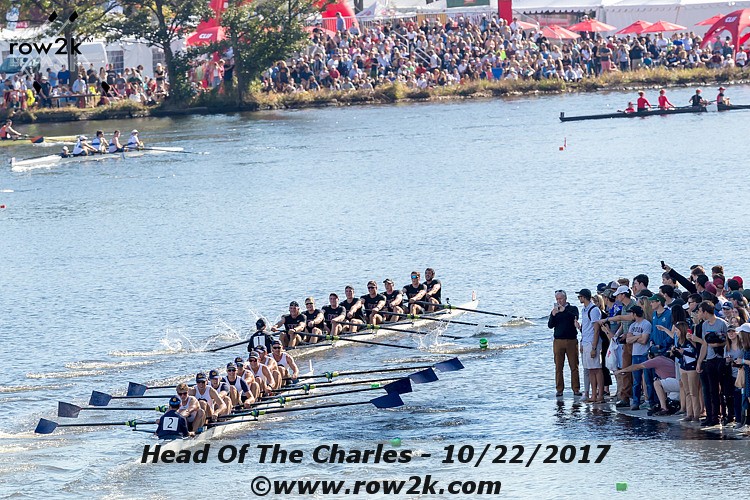 Stay tight on the last turn around Winsor/Belmont Hill

YOU DID IT! Time to catch your breath, high 5 your stroke seat, and warm up with some hot apple cider. No two HOCRs are ever the same, but keeping these coxswain reminders in mind can help you to a fast, happy and successful Head of the Charles!