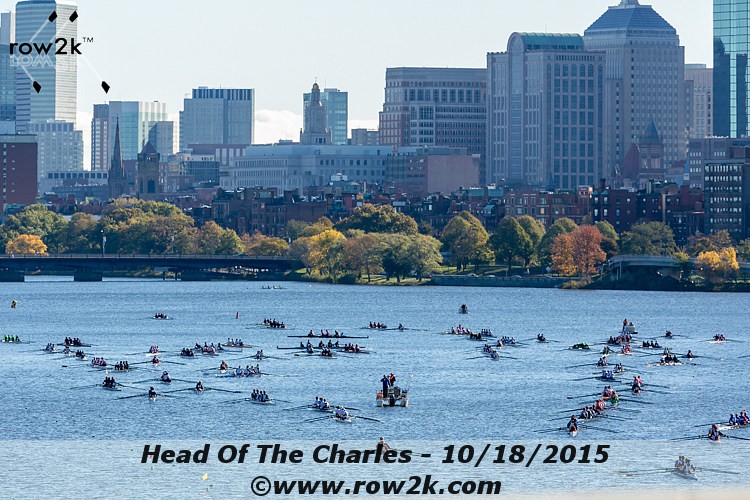 Each February, the folks who run the Head Of The Charles gather to determine how well the daylight use of the 3-mile head course on the Charles was maximized in the past year's regatta. And just what "how well maximized" means varies with perspective—in short, it's a balancing act of priorities, common sense, legacy events, and opportunities.

Fortunately for regatta organizers, there is some awesome historical data available as reference. Longtime HOCR start line volunteer (and doctoral student in statistics) Mike Nute has an HOCR schedule data trove, including the archive of every competitor's time-on-course performance going back to 2008.

We wanted to share a little of the data to give a glimpse at what drives the HOCR schedule and, ultimately, the "start line conveyor belt." But first, a few notes on the schedule's balancing acts.

Schedule goals and challenges
The February sessions review what did and didn't go well in the prior year's HOCR start experience, meaning when races started and stopped vs the schedule. In this case, "going well" means starting and stopping nearly when expected. And "not going well" means later than expected. The goal of having each race start and end within safe-water margins (no overlap with other events) is a gold standard that the regatta strives for. Much of the race start time scheduling/sequencing is consumed with this concern.

One of the challenges in meeting this gold standard is the effect of weather, specifically, wind (as anyone on the course on Sunday in 2016, for example, may recall), which inevitably effects when boats reach the start line and their ability to stay in place pre-start.

Another factor the regatta weighs is the balance of 1x, 2x, 4x, 4+, 4x+, and 8+ events, so that the Saturday and Sunday parade upriver isn't simply all the same event run at the same time. Beyond a desire to "spice it up," the balance of intermixing 1x and 2x events throughout Saturday and on Sunday morning is designed to keep the Finish Area Launch Site from becoming dock-traffic constipated.

Sequencing of the youth events is another factor to balance for regatta staff. Autumn College Board SATs are always held on the Saturday of HOCR weekend; ergo, all youth events are on Sunday. Of course, this doesn't exclude the equipment for youth events from arriving along with all others at Artisani Park on Friday to stake some turf.

Another schedule factor is that Senior Masters rowers don't like to race on Sunday because they're missing church services, or can't burn the town down the night before (or so we've been told), so shifting those events to Saturday was a recent schedule change.

Regatta data visualized
In the midst of the balancing acts comes the power of schedule and event data to guide decisions and provide the ability to see how potential schedule changes will play out for the entire regatta schedule. Some examples of the types of visual data that Start Line Schedule-Cruncher Pro Mike Nute brings to the discussion include the following graphics (though all races are graphic available, these examples illustrate the type of data-mined crunching that goes into the Regatta race sequencing effort). 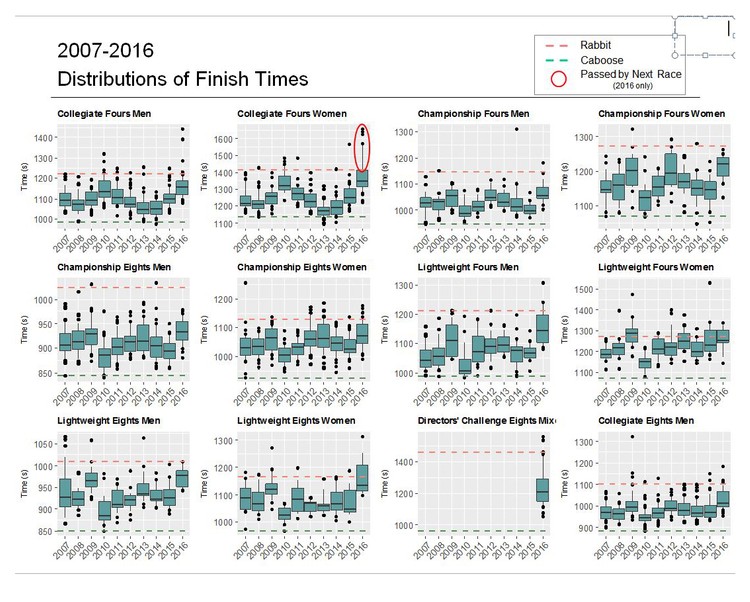 In the above graphic, the dotted green lines are the anticipated fastest rower in the event, referred to as the "rabbit." The dotted red line is the planned slowest rower, known as the "caboose." The vertical green bars are the actual 25th to 75th percentile times, and the black dots above and below are actual rowers who fell above and below in times (we care about these details because, in the words of start volunteer and Textile Regatta organizer Carl Popolo, "HOCR falls into that class of statistics where handling outliers requires extra work because they bring very disproportionate effects to the desired goals."). The line in the green bar represents the median.

When looking at the Lightweight Eights Women event, one can see in 2016 that the field was much slower than anticipated. It's also important to note that the wind was gusting up to 30mph. One can see that the slowest time for the event was approximately 200 seconds (~3mins) slower than what was planned, and slower than the previous several years.

In evaluating this from a schedule perspective, we decided not to allot more time for this event in 2017 due to the rarity of the extreme wind conditions in 2016. Even with the slower time, the rowers in the next event, the Director's Challenge Eights Mixed, did not pass any competitors in the prior event. 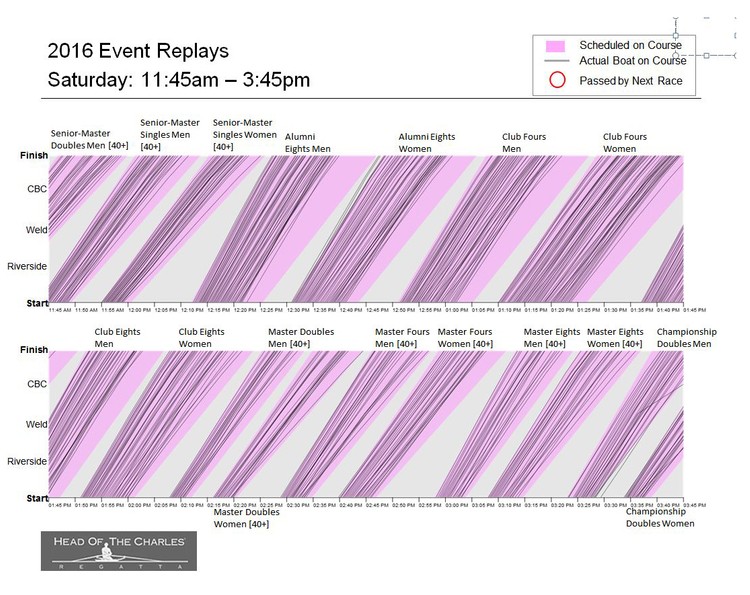 In the graphic above, each line represents a competitor. The pink area illustrates the time planned for each event. This is an extremely useful representation of the data, as we can see how we did in terms of starting the competitors on time and if the time allotted for each event was appropriate. In several events (Alumni Eights Men, Alumni Eights Women, Club Four Women), one can see that we started the event with time to spare. We may decide to give ourselves less starting time in the future for these events to save total time for the day.

Another example of interesting, if not useful, information is in the Championship Doubles Men race. One can see that there was one late start as well as potentially an equipment or rower issue occurring between Weld and CBC (the abrupt slowing of one boat is seen in one of the lines sharply turning).

On to HOCR 2017
The following changes for 2017 were made using the data illustrated above:

The 2017 racing sequence for Saturday and Sunday may be found here.

The HOCR folks involved in schedule noodling and balance-act grappling include the start line folks, HOCR office team, and key race operations volunteers. Every year we try and make the schedule, and conveyor belt, just a little bit better.

A Raft of Course Records
Get our Newsletter!
Enter your email address to receive our updates!