It was a lot chillier Sunday at HOCR, but we also got a slight tailwind (and a couple of new course records) today, so it was a good trade overall. On to the rowing!

Champ Eights
There were a couple of brand new winners in the marquee events today, with the Yale men taking their first-ever title in the Men's Champ Eights, and the Cal-Berkeley women doing the same in the Women's Champ Eights.

For the Yale men, the past 12 months have been a pretty heavy duty update to their rowing history, with Yale ending a 33-year drought at Men's Sprints in May, winning Henley in July, and now capturing their first HOCR Champ 8 title. It's a pretty extraordinary run recently, but for Yale coach Steve Gladstone, it means a return to the ordinary (or at least his definition of ordinary).

"We're very happy to win today, but basically what we're doing is addressing the practices that we have to improve on a daily basis, and nothing beyond that," said Gladstone. "This is a good group of people that are doing their work. If we'd come in 15th today we'd still be doing the same work on Tuesday. There's a lot of chance involved, you have turns, and boats you have to pass, so we don't hang our hat on the Head of the Charles. That being said, we're happy to win it!"

A win is a win, but the field is right there; Cal was less than a second behind Yale, and Harvard, Washington and BU were all within another 10 seconds of these two crews. 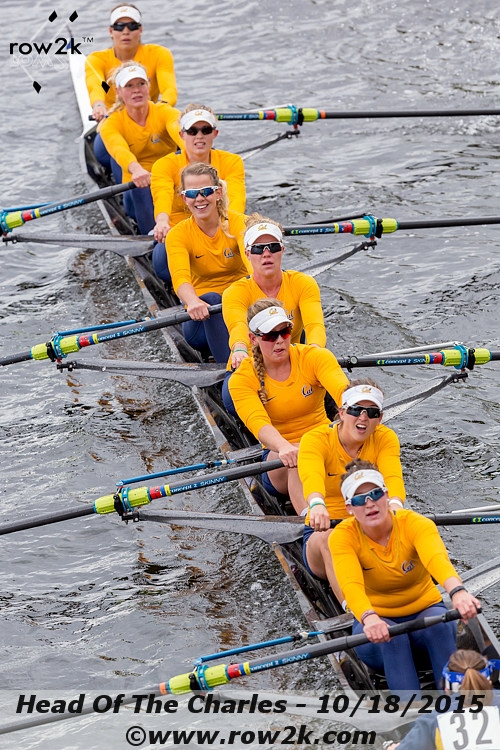 The Cal Women were first-time winners as well

The Cal Women's result was a little more emphatic, with Berkeley coming from bow number 32 to finish 25 seconds up on 2nd place Brown, but Cal coach Al Acosta was quick to downplay any larger meaning to today's results.

"We wanted to keep the rate up," said Acosta about his crew's plan. "We did some pieces with the men's team and that was the first time we had a sense of what was possible. We came out here knowing that we could do well, but I thought we'd lose some time starting back in the pack. Hopefully, we learn something from this, and hopefully they don't get too carried away!"

Lightweights
With the lightweight events not seeing as much Olympic-preparation based attrition as the open events did this year, both Lightweight Eights titles are headed overseas; the Men's Light Eight was won by Canada's National Training Centre, and the Dutch Lightweight women's squad, racing as Minerva, took the Light Women's Eight, with the Princeton men and Radcliffe women taking top collegiate honors. Cornell and Riverside took the Men's and Women's Lightweight Fours, respectively.

Juniors
Sunday is a big day of juniors racing at the Charles, and it's always a spectacle, never failing to be by turns inspiring, amusing, and occasionally even heartbreaking. Huge entry lists, kids going to the well on what's likely to be one of the biggest stages they'll see at this level, and really, really good competition make these events stand out as some of the best of the regatta.

Given the nature of junior rowing, you wouldn't expect to see consistent results, and this year's regatta was no exception. Strictly by the numbers, the eight youth events saw eight different clubs win, with the winners representing 4 US states and 3 different countries, with only two crews (Saugatuck in the YW8+ and Quad Cities in the YW2x) repeating a win from 2014.

"We really enjoyed this, we did a lot of hard training leading up to this," said Marin's YM8+ coxswain Brandon Levy. "We're seeing teams from all over the country and all over the world to compete against, and that was very spectacular." 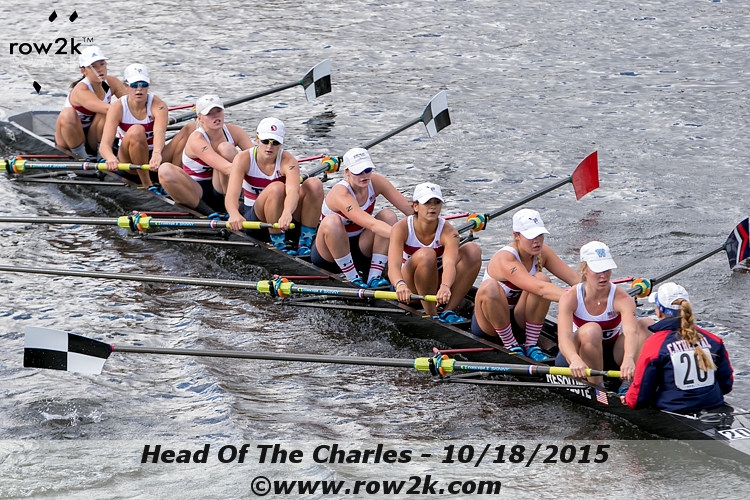 There are occasional tensions in Junior rowing between scholastic and HS teams and club teams, so it was nice to see one crew that seemed to bridge that gap creatively and gracefully. The Thompsons Boat Club entry in the Women's Youth Eight raced with five different blade designs today, with the oars painted to represent all of the teams that the TBC athletes would be returning to when the scholastic rowing season resumed in the winter.

"There's so much scholastic rowing in our region, and these kids row for their scholastic programs in the winter and the spring, and we only have them for a short time in the fall to get them ready for the Charles," said Thompson's coach Greg King. "We're just really proud to have kids from so many different schools representing our TBC boat here." The five DC schools represented in the TBC crew today were National Cathedral School, Walt Whitman High School, McLean High School, Holy Cross and Washington & Lee, and King actually painted all the oars and oar patterns himself.

Eliza Kallfelz of the Narraganset Boat Club, still in her first year of rowing but already this summer's USA JW1x, turned in a solid performance to win the Youth Women's Single. Read our full interview with Kallfelz here.

"The Head of the Charles really is the best regatta for Juniors and Masters," commented one spectator today, and it would be hard to argue otherwise, on the evidence of both days of racing this weekend. 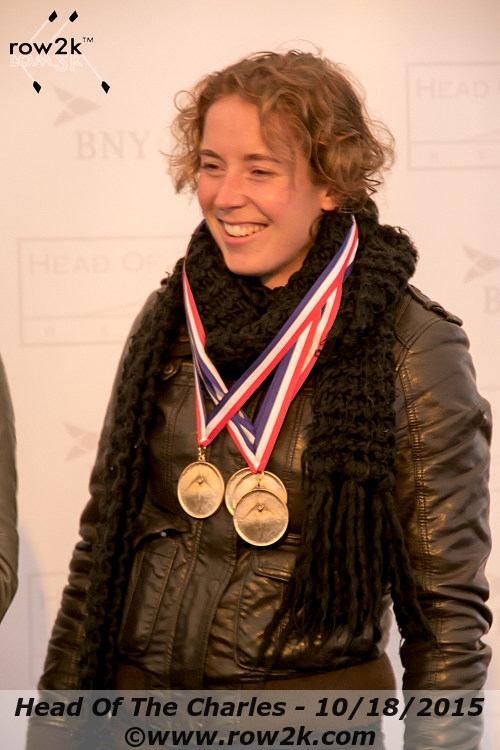 Got bling? A Minerva rower keeps HOCR medals safe for her teammates.

Masters
Sunday is predominantly a small boats day for Masters at the Charles (save for the Director's Quads, but more on those in a bit), and a few folks came out to play (and win) today, with 2004 Olympians Kelly Salchow-MacArthur and Hilary Gehman reuniting for the first time since Athens, while local been-around-the-blockers Sean Wolf and Pete Morelli captured a nice win as well.

Para-Rowing
Sunday started with the three adaptive events, and despite the cooler temps and the early hour, cheers met the Para-crews as the churned up the water over the full 3-mile distance.

"It's absolutely amazing to row here," said CRI and USA Paralympic LTA 4+ coxswain Jenny Sichel. "It's beyond valuable that there's adaptive rowing in the Head of the Charles. When is it not fun to have a crowd this size? When we came through Eliot Bridge today, we heard the crowd, and our split dropped five seconds!"

A new exhibition event at this year's HOCR is the Adaptive Inclusion Double, which pairs an able-bodied athlete with and athlete of "a verified physical disability" to row the course. Per the Head of the Charles, "the HOCR hopes that this event will serve as an opportunity to expand the para-rowing field to athletes who may not otherwise be able to compete in the LTA 4+ or TA 2x events." (The "verified disability" definition caused a little controversy earlier in the week, but seems to have worked out for all).

Directors Challenge Events
The Directors Challenge Quads are an institution unto themselves by now, with truly serious folks racing alongside people out there just for fun; it's a rare regatta in the rowing world where you would find an entry for "Potomac/Craftsbury Composite" coming in 2nd to a team called "Fruit Loops," but that's quad rowing at the Head of the Charles for you.

For the record, Fruit Loops was made up of 50+ Singles Champ Greg Benning, 50+ Doubles Winners Mike Smith and Dan Gorrarian and 40+ Singles Champ Russ Cone, while the Potomac/Craftsbury crew was a combination of the 1st and 2nd place Champ Doubles from Saturday's racing, Stitt/Cowles and Graves/Graves. Read our full interview with Potomac rower Sam Stitt here.

In her capacity as a CBC rower and HOCR intimate, Champ 1x rower and US National team sculler Gevvie Stone was tasked with giving out medals at the awards on Sunday afternoon. In this capacity, she awarded a medal to the winner in the Directors Mixed Quad...herself, along with Jamie Koven, Scott Gault and Katie Bertko. Bertko probably won the mileage award this weekend, with three trips down the course overall, in the Women's Champ Single, Women's Directors Quad, and Mixed Director's Quad.

Winning the Women's Directors Quad was the Dutch composite crew; see below for the full tally of funds raised for charity by the director's challenge events.

Notes from the Course
If there's a downside to realtime results, it would have to be having your dreams totally crushed in realtime, too; you check your results on your phone after you cross the line, and you might be in 1st place, and you think "We won the Head of the Charles!", but by the time you get to the dock, 4-5 crews racing well back in the past have passed you, ooof. Maybe better to wait for final, corrected times?

Sure sign that the regatta is getting going: calls of "Umpires! The Bus is Leaving!" at Cambridge Boat Club. You'd better hurry up, you wouldn't want any, erm, penalties for missing the bus...

We passed along a few regatta stats yesterday, but here are a few more:

When you hit lunchtime on Sunday afternoon at HOCR, FALS already starts to feel really empty.

Princeton definitely had the longest flagpole at the regatta. The pole, which had to be 60+ feet high, was of native Princeton bamboo.

Speaking of sticking straight up in the air, one crew in the youth women's eight jack-knifed an oar under the Eliot Street Bridge, and then just kept going, rowing all the way to the finish with a fully vertical oar.

If you won, we hope you called your mom, but we can vouch for you if you tried and found that the cell reception was overwhelmed, whew.

Those were definitely snow flurries in the middle of the afternoon. 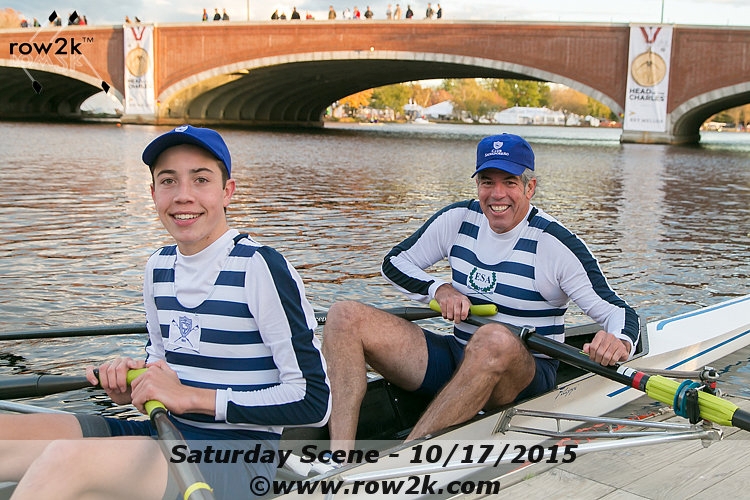