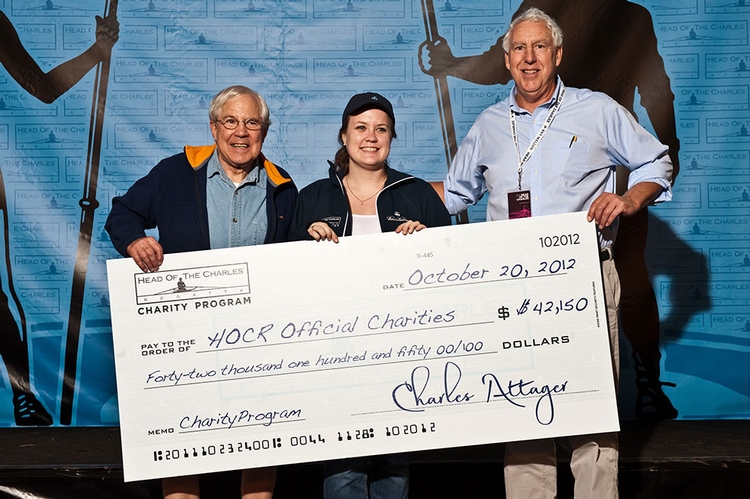 As the Head Of The Charles® celebrates the 50th running in 2014, another milestone to be counted is the success of the HOCR Charity Program. With the donations collected in 2014, the Regatta has passed the $1 million dollar mark in charity money raised since the program's inception in 1998. The Official Charities of the Regatta for 2014 are Community Rowing, Inc's Para-Rowing program and the Cambridge Community Foundation. The total amount raised in 2014 saw an all-time high of $88,780 which surpassed the previous record of $52,000.

The HOCR Charity Program gives athletes the opportunity to secure entry to the Regatta while raising money for one of the Official Charities. The program has a limit of 50 entries, which is becoming a popular choice for crews and athletes to secure their entry in the event. With an acceptance into the Charity Program athletes commit to raising $1,250 per seat, in addition to the standard entry fee. For 2014 the program moved to an online based platform through RegattaCentral, which facilitated the ability of donors to collect donations.

Both Community Rowing, Inc. and Cambridge Community Foundation have been consistently among the Official Charities since the program's beginning and have seen the benefit of the program's success. The Official Charities of the Head Of The Charles Regatta are chosen based on their contributions to the Regatta's local communities and to the development of the sport of rowing.

Cambridge Community Foundation works to provide an effective and versatile vehicle for philanthropy by combining and managing charitable donations, and by channeling them to worthy Cambridge-based organizations that respond to community needs. In this way, CCF is a permanent source of financial support and innovative leadership dedicated to the well-being of the people of Cambridge. A portion of CCF's funding is also directed towards the Cambridge Rindge & Latin public school rowing program, which has seen its team grow to have over 90 members!

Community Rowing, Inc.'s Para-Rowing program is one of the country's leaders in adaptive rowing, giving athletes with intellectual or physical disabilities the proper coaching and equipment to experience sport of rowing. In 2014, over $60,000 of the total $88,780 was raised for the CRI Para program by athletes who looked to give others the opportunity to row as well. Asked about the success of the HOCR Charity program, Bruce Smith, Executive Director of CRI, said:

"The HOCR Charity Program changes lives every day at CRI - it allows people with physical and mental disabilities to experience the Charles River as athletes, and this support brings life and vitality to our entire community. Without the HOCR Charity Program, we would miss the best part of our sport - a true senses of inclusive connection with people of all capacities."

The HOCR Charity Program opens each year in early March, and closes by the sculling deadline on August 1st. For more information about the Charity Program please visit www.hocr.org.