2008
Overview Features Photos Video News ☰
Head Of The Charles Regatta > 2008 > Features
Mom or dad, would you like to row with me?
October 8, 2008
Bill Fleming with Fred Schoch 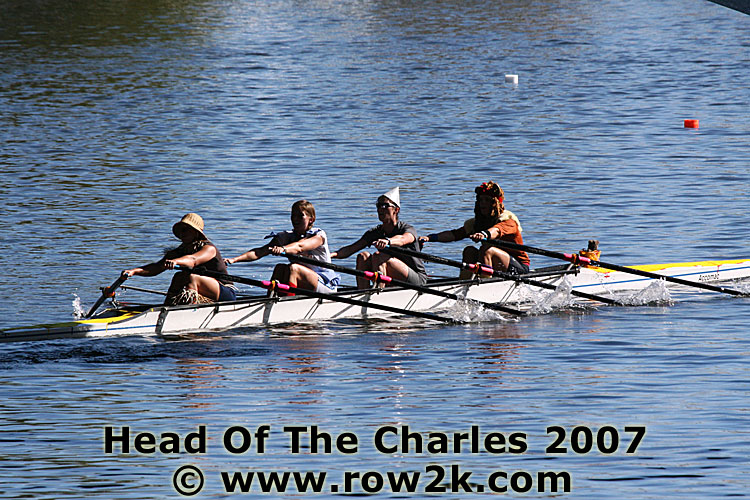 Since its inception in 2005, the Head Of The Charles Directors' Challenge has been a spectacular success, giving experienced scullers the opportunity to row twice in each Regatta while contributing to the permanent endowment of the Regatta, to ensure the longevity of one of the greatest outdoor festivals in the country. In the past three years 136 Quads have rowed the formidable curvilinear course. There are still a few slots open to row this year in the Men's, Women's and Mixed Quad events on Sunday, October 19th; registration has been extended until Friday, October 10th at 11:59 PM. To apply, go to hocr.org/competitors/quad.asp.

On Saturday October 18th, two new "special" Doubles events have been added-Mixed Doubles and Parent/Child Doubles-enabling more scullers to be part of the esteemed Directors' Challenge experience. The Mixed Doubles event is a new opportunity for rowing buddies, spouses, and significant others to row together, while contributing to the Regatta's endowment-and a second shot at competing at the Regatta.

Also on Saturday is a Parent/Child Doubles event - colloquially dubbed the "DNA Race" - which is a rare opportunity for family members to compete in a world-class event. Fathers and mothers may now row with their sons and daughters in any combination. With the appreciative cheers of Regatta spectators along the entire 3-mile course, it will make sculling together on the famed River Charles a memorable moment for all. For rowing aficionados, Parent/Child Doubles will surely be a "who's who" event to watch. Registration for the Directors' Challenge Doubles events has also been extended until 11:59 PM Friday, October 10th. Submit your entry now at hocr.org/competitors/Directors2x.asp

Head Of The Charles Official Charities
The Regatta is honored 37 rowers are rowing as Head Of The Charles official charity participants in various events, to help raise funds and awareness for three non-profit local institutions:

Since its inception in 1998, the Charity Program has generated more than $700,000 for these worthy causes. For more information about the Regatta's charitable endeavors, go to hocr.org/competitors/charity.asp to read more about the success of the HOCR Charities contributions in the official Head Of The Charles Program book, on sale at various venues at this year's Regatta.