Malcolm Howard in the middle of his gangbuster last mile

The results board (well, database-driven web page, as is the case at this point) always provides some surprises come the end of the day, but today was a looker in this regard. The two Championship Singles events each featured "surprise" winners (in dramatic, unforeseeable circumstances in the women's event), with Malcolm Howard and Darcy Marquardt taking the men's and women's singles respectively from putative favorites world champ Mahe Drysdale and Worlds bronze medalist (and homecourse darling( Michelle Guerette.

Drysdale may have been surprised himself when he saw the final result; starting second, he passed defending champ Santiago Fernandez in the middle of the race, and looked like he was cruising to victory by all evidence, save for a fairly wide turn coming into the Eliot Bridge. But Howard, a Harvard grad with intimate knowledge of the river, not to mention a gold medal in the men's eight this past summer, put together a ridiculously fast second half of the race to take the win by just over a half second when the times posted.

Starting in the seventh position after a troubled row last year, Guerette "led" the race until the last half-mile, according to the splits, but things got ugly when she caught up to almost the entire pack of scullers between her and the leader just as they came to the Eliot Bridge. She seemed to be threading her way through the pack, despite the energy- and technique-draining need to look around a whole lot, but

"It was definitely frustrating," Guerette said after the race. "I had gotten through a tight spot, but when we came around the last turn so close together, we looked at each other to see what the other was going to do. I slowed down to let her choose, but I think she did the same thing, and we just got tangled up." Guerette's blade ended up on the deck of the other sculler's hull, and she had to stop rowing to get clear, then regroup and go for the finish line. Her raw time put her four seconds off Marquardt.

Canadian Marquardt used her #1 bow spot to unreal advantage; when she came around the Eliot turn, there were literally no other crews in sight from Cambridge Boat Club.

Unfortunately, to add a half-minute of insult to injury, Guerette was dinged with a 30-second "aggressive passing" penalty. The wielding of the "aggressive passing" rule has been aggressively applied this year; Guerette looked mostly like a fast sculler simply trying to find an honest way to pass a large cluster of much slower scullers. The crew of your correspondent was also briefly tarred with this label, and, judging by the bellowed comments coming from the coxswain seat of the other boat, my sense of things was it was more a case of "aggressive getting passed!" Nonetheless, the logjam clearly cost Guerette a few seconds, and the penalty bumped her official finish time down to ninth place.

Beyond the Championship events, I'll let readers search the results for their favorites; with so many buddy boats, reunion crews, club crews, celebrity gatherings, and what the heck boats, it's all about just rowing hard and giving it the best go possible that counts. A few efforts do stand out: the Etats Unis master women's eights won their event by 37 seconds (albeit down from the one minute margin from last year); Judy Geer won yet another HOCR; Team Attager (including HOCR director Fred Schoch) won again this year; the margin in the women's Club Four came down to 0.074 seconds; I think it's three years running in the Club Eight for UT; Teresa Zarzeczny-bell and Saiya Remmler won the master women's double by 51 seconds; Sloan DuRoss did not miss any buoys this year on the way to a victory in the Champ 2x with Sam Stitt; and lightweights Jana Heere and Wendy Tripician led the Champ 2x for over half the race before succumbing to the lightweight-unfriendly headwind in the latter part of the race to place second.

Results aside, it was a truly fantastic day at the Head Of The Charles - the torrential rain from the overnight was gone by dawn, and intermittent sun and a tailwind through the Powerhouse stretch made for a great experience on the water; and the banks of the Charles were swarming with people

Seen and overheard on the banks of the Charles: 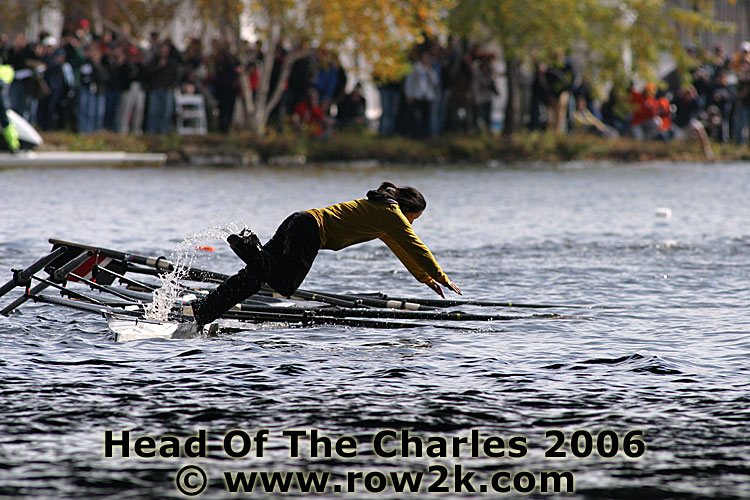