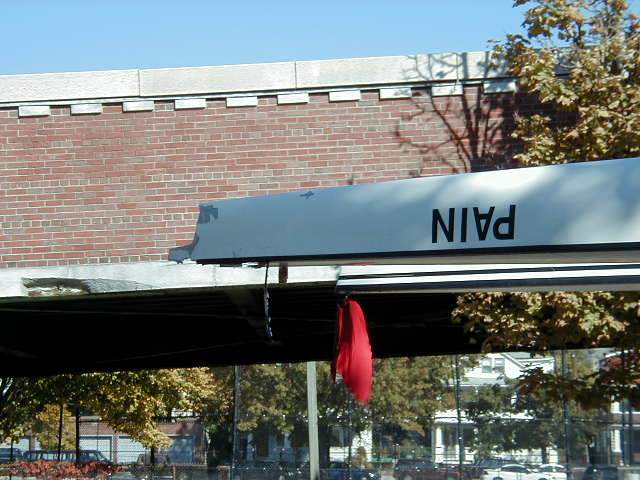 A picture is worth a thousand words

Speaking of crashes: A picture is worth a thousand words (as is a well-chosen, if augurous, boat name) thanks to Jeffrey Swing, not a bad name for an oarsman...

Engine room gorillas square off:
At the Schuylkill, I had a chance to BS with the boys from the Charles collision; good people all around. They told me they had planned to wear gorilla masks at the Schuylkill, but it never came together...

Buoy-dragging, the whole story: (thanks to Matt for permission to publish)


I am the coach of that eight that provided a lift for one of those neat little orange bouys. It is kind of funny because I told my coxswain before the race that if her oars crossed the bouy line that was ok as long as she did not compromise one with the boat. She replied by telling me that while she would stay close to them as to steer the fastest line, she felt uncomfortable about getting too close because "what if one gets caught in the oar?" Perfect jinx I guess.

AFter steering a great race for a youth coxswain in her first Charles, she found herself passing a crew at the entrance to Eliot. Thinking back to her coaches words of wisdom she hugged the port bouys to make a clean pass and four seat caught what was more like a crab trap than a crab.

I have to say though I am proud that they pushed on and still finished in the middle of the pack, despite carrying an anchor for the last 600 meters. Maybe there should be a bonus for capturing one of those elusive little orange balls and bringing it with you. Those competitors that had their times adjusted for missing one might not feel as bad after reading this story. They had the time of their lives though and are ready to try to come back to conquer Chuck next year. Perhaps with blades coated with vasoline.

Most Questionable Announcer Comment of the Day:
"The next boat in the women's champ 8 race is the University of Southern California team, which is O.J. Simpson's alma mater!!! Let's hear it for USC!"

Quote of the regatta? Yeesh...
"I wasn't trying to put a hole in their boat (with my oar), I was just trying to hit their coxswain."

My Chuck: the sickening sweet sound of fiberglass clashing…
After taking so many pictures of crashes, and posting them on row2k with almost vicious glee, I was on the other end of the lens in my row with the Fat Cats on Saturday in a classic crash just on the far side of the Weeks Footbridge. It was one of those setups where there is plenty of room between the crews on one stroke, blades are overlapping on the next, and before you know it there's an oarblade in your lap…

I won't name any names because, as you'll soon see, some things uttered in the heat of battle are best left on the battlefield. I would also make the case that we gave more than enough room to make the turn, and the opposing coxswain failed to use it, but it's always open to interpretation - it's the Weeks turn, after all. I should add that our coxswain, Alden Zecha, a former US team men's eight cox, steered the best Charles course I have ever seen, crash or no crash, and I've gone down the course a few times. I'm pretty sure he took the prudent and safe line through the crash zone, but I was just an oarsman in the engine room, and have no say in these things.

The crash: we come through the Week Bridge side by side, the crew on the inside floats over to us, and the yelling begins. "Yield! Yield! Etc! Etc!" "Turn! Turn! You have tons of room! Etc! Etc!" The usual stuff. But as we keep trying to separate, things just get worse, as the oarsmen on the side opposite the crash kept trying to row, pushing the boats closer together. Soon, an oar was across our gunwales, and then I heard it, a crazed, demented, mind-bogglingly dense instruction:

"Hit him! Hit him!" Someone in the other crew wanted his boatmate give my boatmate an oar in the bridge of the nose. The standard profanities or even random threats don't bother me, but this was the worst comment I've ever heard in my entire rowing career, a true feather in the cap of the engine room gorilla who was yelling it.

We untangled, the other crew pulled ahead of us, and we lost likely 20-30 seconds in the tussle, the other crew maybe a bit less. At the finish line, we passed the same crew a few strokes over the line. I asked the guys in the bow if there was someone in their crew who wanted to come over and hit me, but didn't get an answer. We finished 43nd (doh! my worst ever by about, ah, 30 places or so, but still not a terrible row on the whole), they finished a couple dozen places ahead.

I suppose it didn't help that I had admonished folks not to smack into us before the race in the row2k "Chuck Riff." Since race day, I've received two friendly notes from members of the perp crew, including this one from Greg Hayes, reprinted with permission:

"As the stroke seat of the xxx eight I have reason to respond to your warning on the row2k webpage. On the Thursday before we left for the Charles I had the opportunity to read your warning. Being directly behind you I prepared our team for the worst in the event of a tangle. I believe it is true that you yourself follows the credo, "Don't yield until you can see the whites of their eyes." Whether it was the strong port headwind, the impossibility of making the Weeks Footbridge turn without swinging wide right prior to the turn, or our unfortunate seat of unlucky bow number 13 our inevitable clash was not so bad. In my past 6 years at the "Chuck" it has been events like that which make it so much more than any other race. Thank you for a great race. I hope you had a good row besides our rude introduction. I am glad we could amuse the crowd for a bit and still manage to have a great race. I hope that you will follow up on you promise to include us in the rag/ gossip newsletter. Keep that wide-grip ready!"

So in the end, have an ugly collision, yell some ugly comments, make a few friends. All in a day's racing.

Stats of the Day:
Fastest time over the course for the entire regatta? The Princeton Training Center lightweight eight.

It looks like, from the preliminary results at least, that, had Fiona Milne not had a buoy violation, there would have been a dead heat in the lightweight women's single.

Before I tell another ugly story, which of course everyone hankers for, I should tell a good one: two National Team types were racing in the single, one a longtime sculler, the other a very successful sweep rower. As the sculler pulled up to the sweep rower, the sweep guy, not exactly famous for his self-effacing manner, called out: "Go ahead, you got it, go through." A generous and sportsmanlike gesture.

Not all fast crews were so cool. Here's a story sent to me by the winner of one of the singles events:

"Do you have a section on your page for "most obnoxious comment of the week?" I would have to nominate (name deleted) who, in the midst of a crash with an admittedly slower double during his HOTC race, allegedly screamed, "DO YOU KNOW WHO WE ARE???? MOVE OUT OF OUR WAY!!!," followed by repeated bashing of an oar into the hapless (allegedly interfering) rower's chest . . . I think we need the poor conduct police to step in . . ."

Speaking of crashes: YOW! (photo by HOCR photographer Carlos Ridruejo, sent by Katy Bonnin; file size a little big at 90k but WELL worth the wait - send it as a postcard!)

Anyone see the women's Youth Eight that picked up a buoy on one of their port blades, then dragged it, buoy cable and all, all the way to the finish line? Kid just kept rowing, not a bad job.

Then there was the lightweight eight that hit the Eliot St. Bridge at full speed. Their bowperson took a mean shot, and their three-seat broke his handle off completely. He just grabbed onto the shaft of the oar and kept rowing. That's toughing it out…

row2k will be reprising the 1997 recording of notable men's coxswains by giving the women their turn on the Real Audio server. Holly Hatton, cox of the 1980 Rowing Club and current BU coach, did the honors of representing National Teams Past, and current US women's coxswain Raj Shah represents the current crop.

Only problem, the youngster forgot to hit "Play…" We'll be using a recording from an upcoming West Coast head race to fill the gap.

Party announcement of the week: "My only plan: 6AM at the IHOP." I believe that FISA rules are in effect for Sunday night at the Charles…