Northeastern wins a semifinal and gains a Henley Sunday final

With their men's eight already eliminated from the 2019 Henley Royal Regatta, Harvard University's coxed four was determined not to let the school be completely shutout of a possible Sunday final race.

And they were especially prepared for Oxford Brookes, the British university that had taken their eight out of the Temple Challenge Cup chase on Friday in the third round of racing.

So, they went to the line in the Saturday semifinal with an idea of how Brookes would race, and how they could use the information to their advantage.

"We knew they were fast to the Barrier, and to the Fawley," said sophomore Lucas Clarke, who was rowing in bow. "But we also knew they hadn't raced the second K yet in this regatta, and we knew that was where to attack them.

"And that's exactly what we did," he said. "We hung on until the Enclosures, and then we pushed through." 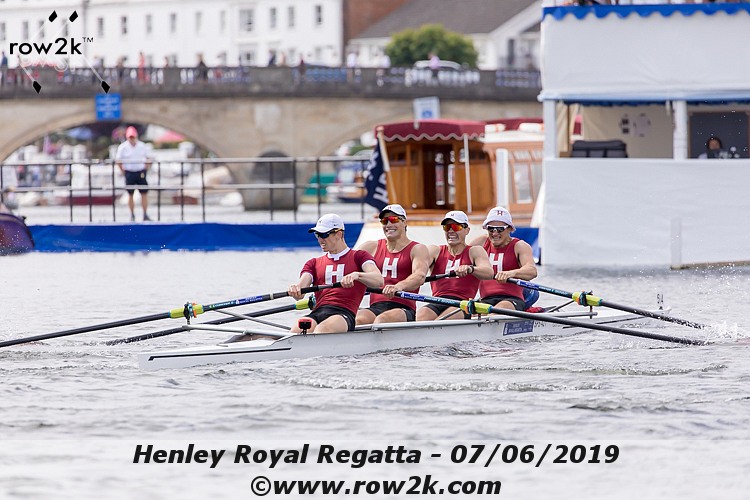 Harvard finished the race with a sprint that drove them past Brookes and earned them the win at the finish line with a margin verdict of two-feet, and with that managed to be the first American crew to reach a 2019 Henley Royal Regatta Sunday final.

With their finish, Harvard secured a spot in the Sunday final of the Prince Albert Challenge Cup, where they will face Durham University, which won the semifinal before theirs.

Harvard's win led the way for a day that saw two more US crews follow with semifinal victories, and the chance to be in the Steward's Enclosure Sunday afternoon when the prize giving begins.

Of those crews, the next crew to join Harvard on the Sunday schedule was Northeastern University, which defeated Newcastle University, and will row against the Oxford Brookes University eight in the Temple Challenge.

Like Harvard, Northeastern went to the start with a pre-scout based race plan, and executed it to the letter. From watching Newcastle row through Brown University on Friday, after Brown led them for the first 1500 meters of the race, Northeastern knew that they would need to secure the lead, and then have a strong push into the middle to hold it. 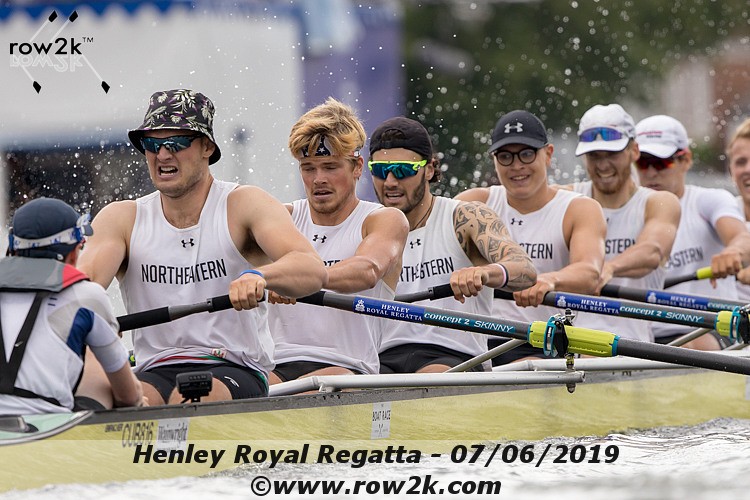 "We came in expecting to be given a good race by Newcastle," said Northeastern senior Braeden Camp. "We went to the start expecting a good, tough race and they gave it to us. It was basically everything we hoped for.

"From watching (the Brown race) yesterday, we knew that they were going to put out a full, complete race today, come out hard from the start, then settle into their nice strong rhythm and have a very strong wind up at the end.

"Going into our race, we knew that we had to match them, and really push out through the mid race to try and keep the upper hand for that big wind up they pull out at the end of the race."

Northeastern coach John Pojednic was visibly pleased with the way the school trip overseas has gone, from a week of training in Germany, to being in Great Britain and having two eights race deep enough into the Temple Challenge that they had to face each other in the third-round Friday, with the A boat eliminating the B boat.

"This has just been a great experience," Pojednic said. "We had one boat in Germany for a little while at one of our guy's local clubs, and then had both of our boats meet over in Cambridge University to train together. Cambridge was amazing, they were wonderful hosts, and we had just a great, great experience," he said.

"And ever since we've been in Henley, it's been like a fairy tale, like a dream. The weather's been amazing, the people have been amazing, and the guys have just been great. To have the B boat go out on day three at the hand of the A boat, I was so proud of the way the whole team handled that dynamic," Pojednic said.

"It could have been pretty bitter for the B boats guys, but being down there at the start for that race, it was just like being down at the Charles in practice."

Next to advance to a final was the US Naval Academy's entry in the King's Cup. The Naval Academy eliminated France and will vie for the newly minted cup on Sunday against Germany. 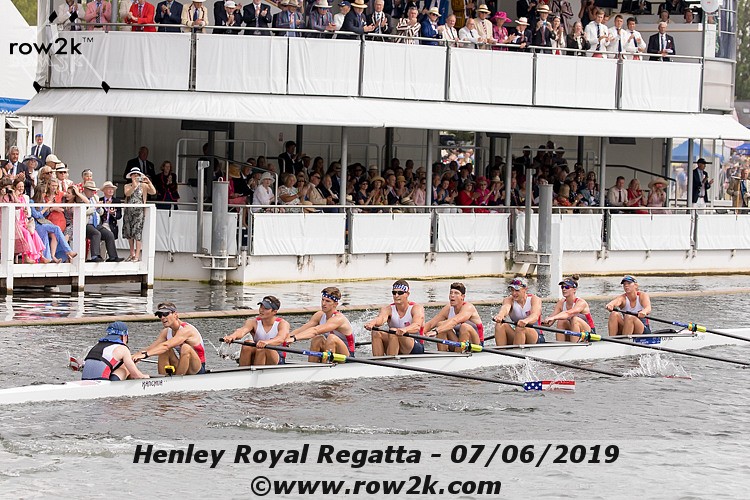 The US will race Germany for the King's Cup Sunday

The event is being held to commutate the 100-year anniversary of the Henley Peace Regatta, which was run in 1919 during the first summer after the end of World War I.

The original King's Cup event featured the six allied countries that fought together during the war. For this 2019 event, Henley invited the original six allies of Australia, Canada, France, Great Britain, New Zealand, and the US, - plus Germany and the Netherlands - to send mixed gender eights to race in the centennial celebration.

"This has been an awesome experience, especially since we get to race for the King's Cup. It's a once in a lifetime opportunity," said Alexandria Vallancey-Martinson. "Our goal coming here was making it to the finals and winning. This is really special."

In the elite events, some of highlight races will be the Grand Challenge Cup final only dual between the British national team, (racing as Oxford Brookes University and Leander Club), and New Zealand, which is featuring two of the biggest names in Kiwi Olympic rowing history - Mahe Drysdale and Hamish Bond, who has come out of retirement and joined the eight for another Olympic run.

Drysdale was hoping to race for a record seventh Diamond Challenge Sculls win in the men's single, but was eliminated from the competition in the opening heat. Also gone from the men's singles lineup is Kjetil Borch, who lost to Drysdale in the 2018 final. 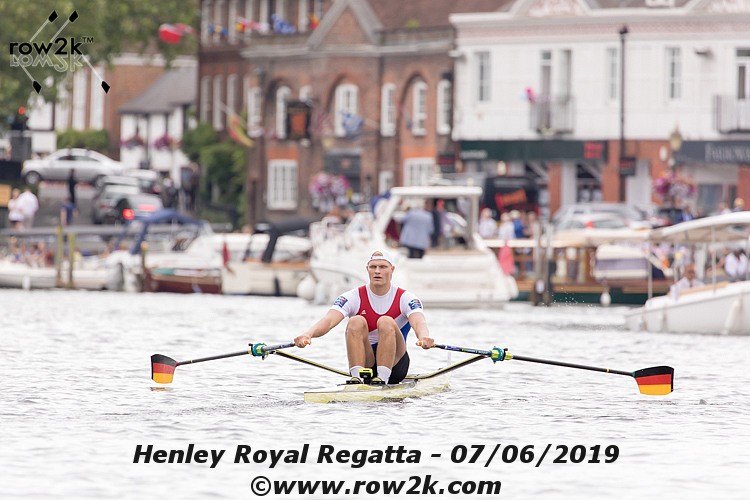 Most of the buildup for the men's single event has evolved around Drysdale going for a seventh and record-setting win, and possibly having to do it in a rematch against Borch. But one of the early favorites to play spoiler to the Drysdale-Borch final was Oliver Zeidler, who was still in for the semifinal.

Zeidler eliminated Harry Leask, the GB men's single who beat Zeidler at the 2018 World Championships. Zeidler did not have to play spoiler Saturday, since both Borch and Drysdale were eliminated, but he did reference the pre-regatta talk about it.

"I'm a bit surprised that Mahe Drysdale and Kjetil Borch are already out, so the dream final everyone wants will not happen here," Zeidler said after his race. "It was Kjetil and me who were the favorites. I think that's why we were put in the middle, so the only possibility I would race against either of them would happen in the final.

"But they are both out now," he said.

Zeidler will race Dutch sculler Guillaume Krommenhoek for the championship. "I'm feeling quite comfortable now," Zeidler said. "I think (Leask) was the toughest competitor still in the field. He's a good sculler, and he beat me in the World Championship last year. Now I feel confident about the final."

In the women's single Princess Royal Challenge Cup, Kiwi Emma Twigg continued her comeback tour by advancing into the Sunday final. She will race Lisa Scheenaard of the Netherlands. 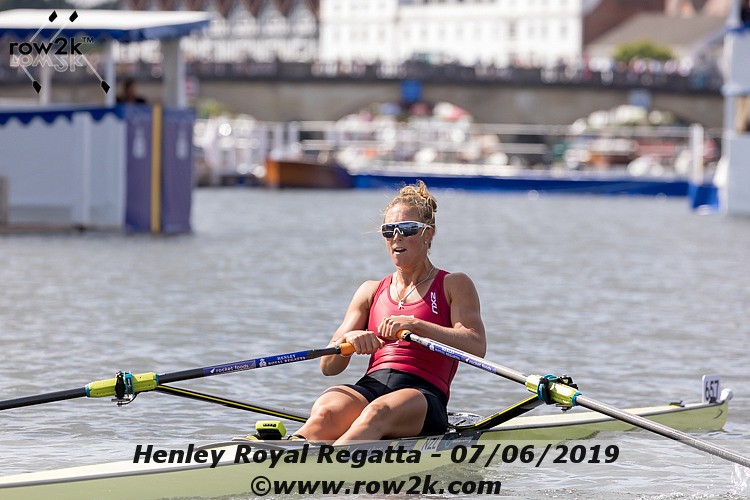 Familiar face. People who remember recent US women's national teams an watching the Henley racing, might have recognized the women competing in the only US women's crew that was entered in Henley and rowing in the Advanced Rowing Initiative of the Northeast women's quad in the Princess Grace Challenge Cup.

It's Heidi Robbins, who rowed for Princeton University, and then stroked the US eight to a gold medal at the 2015 World Rowing Championships, qualifying the boat for the 2016 Olympics. The quad is part of the Saratoga Rowing Association's Advanced Rowing Initiative of the Northeast (ARION). An injury to one of the crew drew a call to Robbins who has been training in a single, while attending Dartmouth Medical School.

Robbins has taken a leave from school to see if she can find her way to the 2020 Olympics and was available to race this week. Robbins was plagued with a back injury during her time with the US team, and missed selection to the 2016 Olympics.

She left the training center, had back surgery, and enrolled in medical school. And now she is back and training. Where she may end up a year from now is a big unknown, Robbins said.

But a month ago she had no idea she would be racing in a Henley semifinal. "I just finished my second year of med school and I had planned to take the year off and kind of see where I could get. 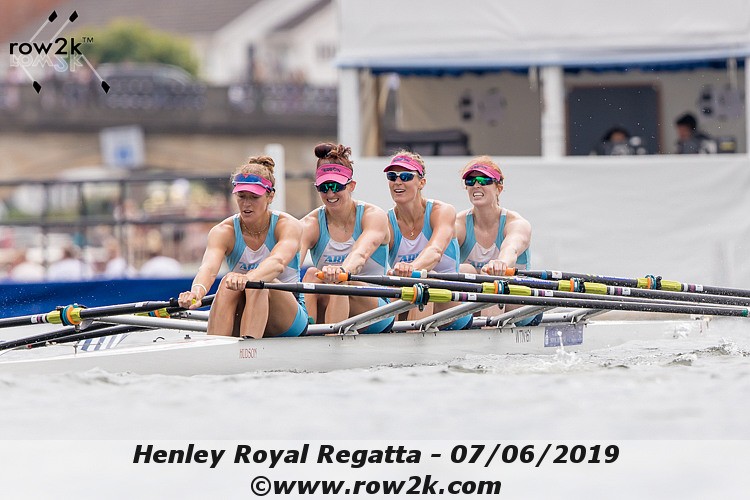 "I wouldn't say I have been full time training, but I've been rowing while I've been in school and trying to stay in shape and hoping that I can put myself in a position for 2020. But it's early in the game. I've been up at Dartmouth, been living at home and rowing the single on the Connecticut River, which is really nice.

"I don’t know what will happen, but I think the name of the game is to be healthy and to see what doors are open. Getting to join this boat was not something I had planned on, or even remotely thought would be a possibility. It's been really fun. I love big boats, and it's fun to row with a group of women and have a goal and make small improvements each day."

What's a Henley report without a line or two about the weather? So … The heat died down, and the skies turned gray, but predicted rain showers never showed, and the party continued. One more day of sunshine is expected.

On to the finals. 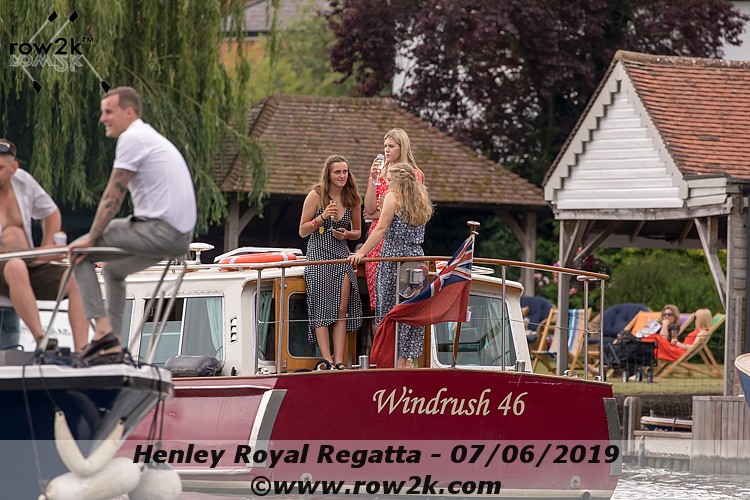 The party goes on
back to top
Henley Royal Regatta Features

Henley Royal Regatta Saturday: Who, When, and How to Watch
Get our Newsletter!
SUBSCRIBE
Support row2k!
If you rely on row2k, please support row2k!
Advertiser Index
Advertise on row2k