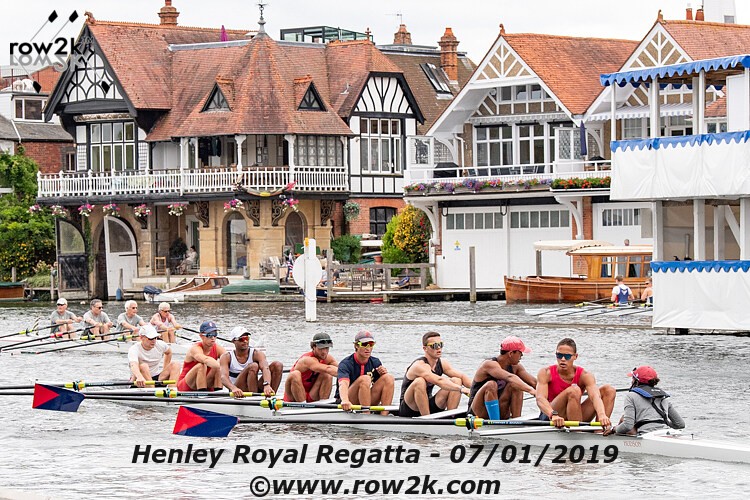 Penn's lightweight eight getting in a few final strokes

Alex Bowlby and his Penn lightweight teammates didn't have the Henley Royal Regatta front of mind when they lined up for the final at the Eastern Sprints this spring. They were not the favored crew to win the 2019 season conference championship, and they were racing in one of the least protected lanes on that windy Worcester day.

But it didn’t take long for him to remember after crossing the line in first and taking the school's first Sprints title since 1976, that a trip to the storied British regatta was part of the prize. Penn coach Colin Farrell had been telling his crew all season - win at Sprints, or the IRA, and you go to Henley.

Not only did Penn win the light eight at Sprints, but they took third at the IRA Championships, and Monday morning they were among the record setting 660 crews entered to begin racing Wednesday morning in the heats of the one-and-done Henley dual race format.

Racing in the Temple Challenge Cup, a division filled mostly by heavyweight men's eights, Penn will line up against the University of West England and do what they can to extend their season for another day.

Should they survive that, they will race on until they are either eliminated in the later stages or win in the five-day event. It is a fairly big task to win as a lightweight crew at Henley, but Bowlby said that after winning the Sprints in a crew that is expected to return in full next season, racing at Henley has no down side.

"It's just totally surreal to be here," Bowlby said. "The coxswain and our stroke seat are the only ones to have ever been here, so it's really cool. We had a really great season. Obviously, winning the Sprints out of lane six was a hell of a lot of fun, but we felt like we had unfinished business after the IRA. So here we are, and we've got another shot at it. The whole boat is coming back next year, and we're really excited to be extending the season.

"Colin has always said that to come to this special place, you've got to get it done at the Sprints, or IRA, you've got to win. So, after Sprints, we knew we were going to be able to come. But we also know a Penn boat has never won the IRA, and we're still chasing that. We're really excited to get back to it next year, so this is just a continuation of our season for us and a shortening of the summer.

"We're well aware that we've got some big boys coming from all over the country and the world to race here, but we feel like we have everything to gain and nothing to lose. This is a celebration of rowing and we're all excited to be part of it." 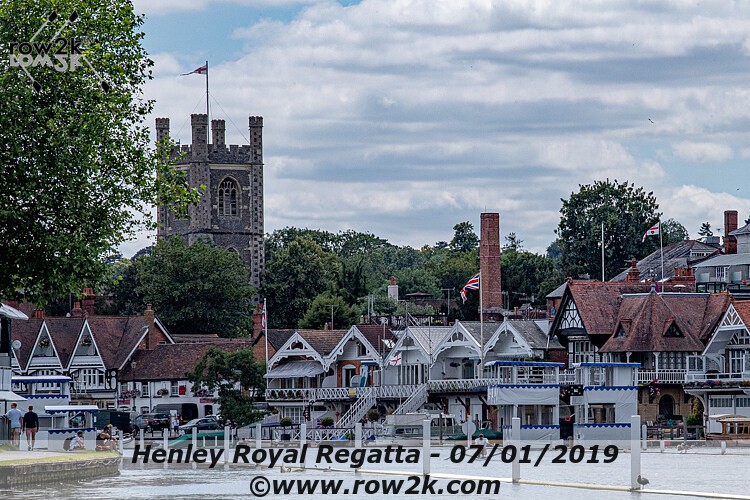 A celebration or rowing is exactly the vibe that permeates the entire town of Henley-On-Thames, a small town located on the River Thames about 33 miles from London. Every summer, the little town turns into one of the largest tourist attractions for people who love rowing. It is has been that way since the first regatta was held in 1839.

Those who have come describe it with words like "special" and "unique" and "historic." And every one of those terms fit. Henley is - well - different.

It is run over five days, and some of the best crews in the world come to race in a head-to-head format in front of crowds that line the river on both sides. Spectators spend the day picnicking long the banks, some in rows boats tethered to the course barrier on the water, and nearly everyone is decked out.

Getting dressed in Henley garb is not just invited and expected, it is mandatory inside the Stewards Enclosure on the bank near the finish area.

Jackets and ties for the men. Skirts or dresses for the women - with hems below the knee. Hats are as much a part of the event as it is for the Kentucky Derby. While getting dressed up is not everyone's cup of tea, it's part of the fun, along with the size of the crowds that cheer loudly from start to finish. And for crews from the US, cheering crowds - at least of this size - is not something they experience often.

There is the Head of the Charles Regatta in the fall. It has huge crowds and is as big a celebration of rowing, but Henley is different in that it is head-to-head sprint racing pageantry, and the crowds are nearly on top of the crews.

It's an experience that draws crews from all over the world, and the "mystique" as Boston University coach Tom Bohrer explains, that makes occasional trips to Great Britain just a few weeks after the collegiate season has ended worth the effort. Of the 660 crews that entered the regatta, 40 were US crews of all ages and levels of experience, from high schools, colleges, rowing clubs and associations.

Among them will be two BU crews, an eight rowing in the Temple Cup, and a coxed four competing for the Prince Albert Cup. Bohrer, who raced at Henley when he was part of the US national team, knows that the trip can be good for both the school and for the athletes who get to experience it.

"A lot of teams take crews because they've had an exceptional year," Bohrer said. "And we had a good year this year. This is the second time we've gone in three years, and we do it for a few reasons," he said.

"That's one of the top reasons we do it," Bohrer said. "But the second biggest reason is that just going to Henley is good exposure. The world is watching and when people see BU racing at Henley, it's a big boost for us. For kids who are thinking of coming to BU, it's a big deal.

"Henley has this mystique, this aura," Bohrer said. "People seem to know about the Head of the Charles and the Henley Regatta. It's a regatta that brings people together. We have a lot of parents coming over and we have a lot of alumni from Europe coming over." 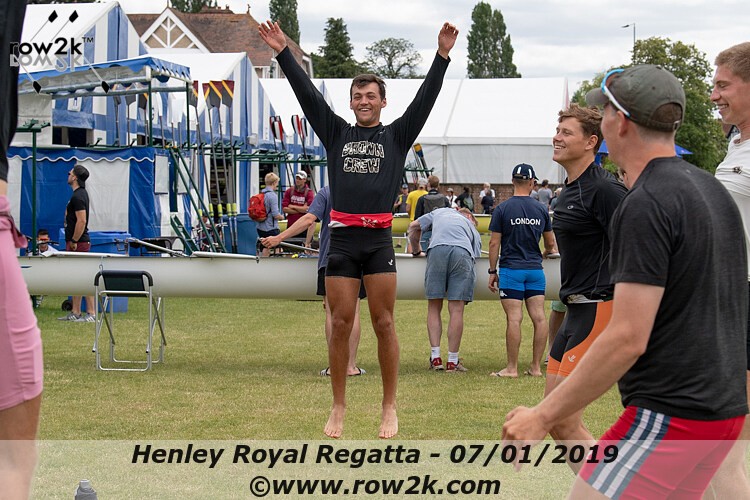 Brown University is also one of the US college teams that has a crew racing here, and head coach Paul Cooke echoes a lot of the same things Bohrer had to say - Henley is an experience that Cooke likes to share.

"I think the biggest draw is just putting the crew in front of a venue and a crowd that is different than what we're used to," Cooke said. "It makes a big impression. It happened to me when I first came over, and I was in high school rowing for St. Paul's School," he said.

"It was a big memory. We raced in the final in front of a large crowd and it was really loud. It made a big impression, and I like giving the athletes that opportunity."

Other Henley Highlights Worth Mentioning 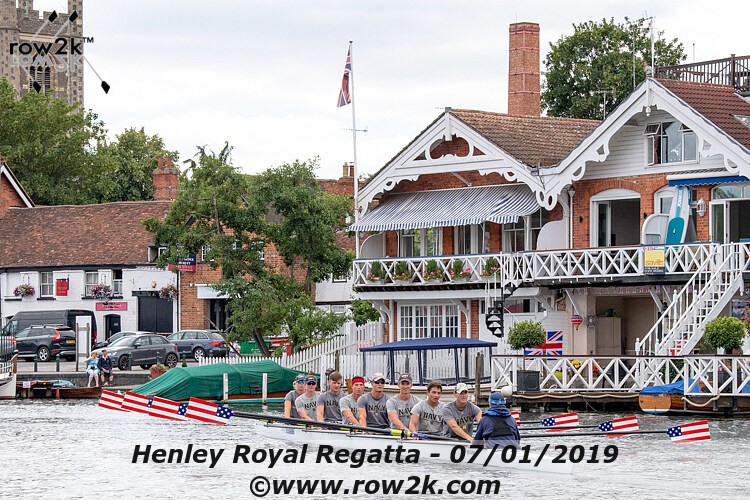 The Henley Royal Regatta is an event of many layers and story lines. This year has a few worth noting, not the least of which is the 100th Anniversary of the Henley Peace Regatta, which was run in 1919, in the spring following the end of the First World War, and it featured the Kings Cup, a race for military crews from the six allied nations; Australia, Canada, Great Britain, France, New Zealand and the United States.

This year, along with a newly minted cup (Australia won the 1919 race and kept the cup), the six original nations are sending mixed gender military crews, along with Germany and the Netherlands they will race in the Kings' Cup.

Each of the teams with have their nation's flag painted on their oars. The US being represented by a crew from the Naval Academy.

On the elite level, Mahe Drysdale is going for a record setting seventh win in the men's single Diamond Challenge Sculls. Drysdale tied the record set by Stuart Mackenzie in 1962 with his sixth win last year.

He will own the record outright with another win this season. It will be an event worth following and will include Kjetil Borch, who led Drysdale in the 2018 final into the enclosures, but saw the Kiwi Olympic champion row him down and take the title.

Drysdale will be rowing in two events. The double Olympic champion lost his seat in the New Zealand single to Robbie Manson, but has joined the other Kiwi rowing legend Hamish Bond, who retired from rowing after winning another gold medal in the pair with Eric Murray and took up elite cycling but is back for another Olympic run. 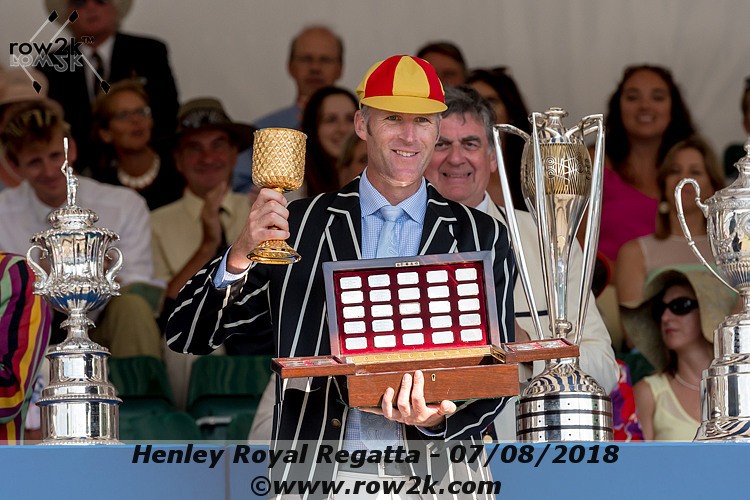