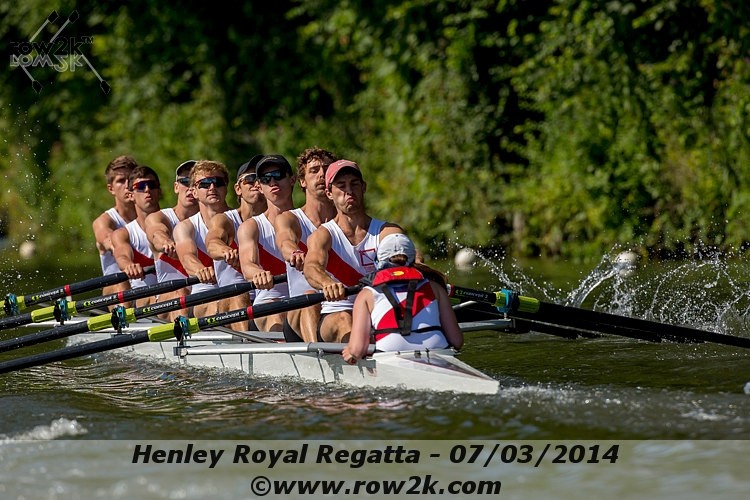 Henley-on-Thames woke up to wind on Thursday, and lots of it. Starting with a stiff cross-breeze at 8am, by 9am there were strong gusts hitting the course, busying coaches to change the gearing as the wind swung round to an unpredictable head-wind that buffeted crews as soon as they left the shelter of Temple Island.

Gloriana, the stunning Diamond Jubilee barge which has ended up moored in the boat tents area for the last three years, had its many flags flying at full spread, and women putting good sense aside for chic found themselves clinging on to big brims and pinning fascinators on more securely to avoid the fashion faux-pas of having their hat fly off and into the path of an oncoming crew.

Day two of the 175th Royal Regatta was a corker, which can best be summed up as 'crash-bang-wallop and a dead heat.' The dead heat came courtesy of Seeclub Zurich, Switzerland, who celebrated at the line, thinking they'd got the better of Molesey after a massive battle through the Enclosures. But Molesey had been leading by a gnat's whisker until the line, and the last surge sent the race to a photo-finish. A protracted pause followed, much longer than the usual photo decision, and eventually a dead heat was declared. Sad to say, HRR don't release such pictures. The re-run will be rowed first thing on Friday morning, presumably by arrangement with both crews, and the victor will meet Oklahoma City River Sport A (half the US lightweight eight) as the last race on Friday evening.

A better race — because at least there was a winner — was in the Temple between University of Michigan and Canadian university champs Western Ontario Technically Michigan led all the way to the final sprint, although it was too close to call at times, but moving to half a length up by Remenham cost them very dearly. As the crews came into the Enclosures in front of a big crowd, Michigan began to wilt, and Ontario seized their chance, putting in one last crucial lift which bagged them the win. Michigan left their hearts on the water, and have nothing to be ashamed of. Elsewhere in the Temple, the Brown freshmen demolished Edinburgh, and Cornell lightweights (Cornell 'A') continued their composed glide towards the weekend, making a nonsense of the head-wind issues (and Durham 'B') with an accuracy heavier crews would envy. They next meet Amsterdam Skøll, who clearly fear the thinner members of the rowing species, as they made hard work of beating Hitotsubashi despite outweighing them by 47 pounds a man. 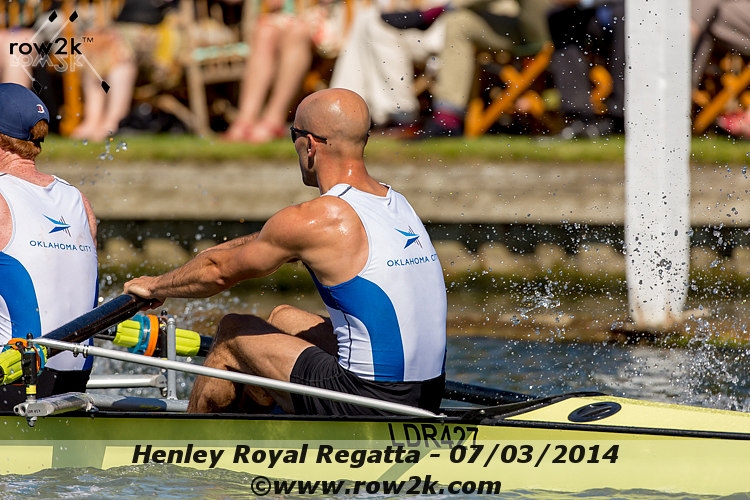 US LM8 broke into fours

The crashes, bangs and a slew of near misses could mostly be put down to the south-westerly wind, which played fair havoc. It strengthened during the day, shoved crews sideways suddenly, and was probably the cause of at least two coxed boats clipping the booms through steering too ambitiously close. It was a day to be on the Bucks station, particularly in a small boat. One of the victims was Rob Roy's Britannia coxed four, although they were already losing to Bayer Leverkusen when they hit the wooden logs. The Greek under-23 Goblets pair of Christomanos and Lampridis nearly came a cropper where the start buoys turn into the booms, but pulled round in time, although they were eventually outclassed by the new South African pairing of Hunt and Brittain. Coming in after that race, Steward umpire Boris Rankov and his launch guests nearly forgot to stand up for the traditional British national anthem, played at the end of each day's racing.

Hands up who remembers when Murray and Bond didn't rule the international pairs. Quite a while ago, isn't it? George Bridgewater, '05 world champion and '08 Olympic bronze medallist in the event, has turned into this season's comeback king after getting jealous watching his old crewmates row in the London Olympics while he was stuck earning big dosh at a market trader's job in the Hong Kong business district. He spent a year getting fit, quit his job a month ago, and is now bidding to join the Kiwi trials in 2015. Bridgewater's first win in a single, against Lithuanian Martynas Dziaugys, was watched keenly by world and Olympic champion Mahe Drysdale, who will meet his former team-mate on the water on day three. All three Australians got through their Diamonds heats, with Nick Purnell looking particularly impressive, and Roel Braas made his opening bid to be the danger-man in the top half of the singles draw.

The elite-level Prince of Wales quads proved eventful, with London rowing through Oxford Brookes and Tyrian & Thames knocking out the over-ambitiously selected Queen's University Belfast. Manchester were stonking along behind Bayer Leverkusen & Berlin when a blade flew up in the air. Half a blade actually, as it turned out that a starboard loom had fractured, leaving them to limp home to a not-rowed-out verdict. (Yesterday's Warrington NRO, by the way, turned out to be due to an asthma attack: the safety boat crew only whizzed up the river at a wash-inducing speed because the paramedic fancied showing off in front of the crowd.)

As well as the drama of the dead heat, the Visitors' saw some cracking racing, with University of London clawing back through Amsterdam Nereus, Harvard getting rid of Melbourne University, and Cornell defeating a Cambridge UK/Columbia USA composite. The Oklahoma City River Sport lightweights had a better day than conditions might have predicted, beating Mendota and Oxford Brookes by a combined total of 6.75 lengths. Schuylkill Navy athlete of the year Taylor Brown from Penn AC and Big Red former U23 finalist Chris Massey were in complete control over Durham University's lightweight double scullers, to earn themselves a go at the Dutch national pair on Friday. Ontario's spare pair of Liam McCormick and Brent Duncan polished off Cygnet's duo and now face South Africa's official top pair, who had a bye.

Two North American crews are left in the Princess Elizabeth school eights, as Shawnigan Lake School and Brunswick School chewed up middle-road UK entries from Dulwich and Latymer Upper for lunch. Brunswick will be looking forward to Friday's meeting with Hampton, who were severely tested by Shrewsbury, but Shawnigan Lake now face British champions Abingdon, who though sometimes scrappy are definitely fast. Pangbourne, who have an up and down history in the event, bettered their form by beating a rather leaden-looking Montclair High School by two lengths.

Ridley College Canada were in action in the Fawley junior quads, and along with Leander recorded the only 'easily' (more than 5 lengths) verdicts in the event on Thursday. One of the selected crews, Northwich, was dumped out by Windsor Boys' School, who despite being lighter rowed through in a nasty head-wind over the last quarter-mile and were promptly dubbed 'giant slayers' by their Twitter supporters. Ridley and Leander are looking particularly strong in this event, and Westminster, though not fast off the start, are far from slow.

Union Boat Club have had an excellent run in the Thames Cup, beating Thames 'B' on Thursday, but will next meet Mercantile, a handy Australian club from the Yarra with several interstate champions on board. The student coxed fours had it hard, plodding up the course like workhorses against the wind. Imperial College and Harvard had comfortable victories against Bucknell and University College London respectively, and now meet each other on Saturday after a gap day for the Prince Albert Challenge Cup. Oxford Brookes maintained an early lead over Michigan to end their Henley campaign — time to break out the blazers and pour some Pimms in the Enclosures.

Friday ought to be renamed Women's Day as the female rowers start their racing, and the first rounds of the Ladies' Plate and Queen Mother quads begin. 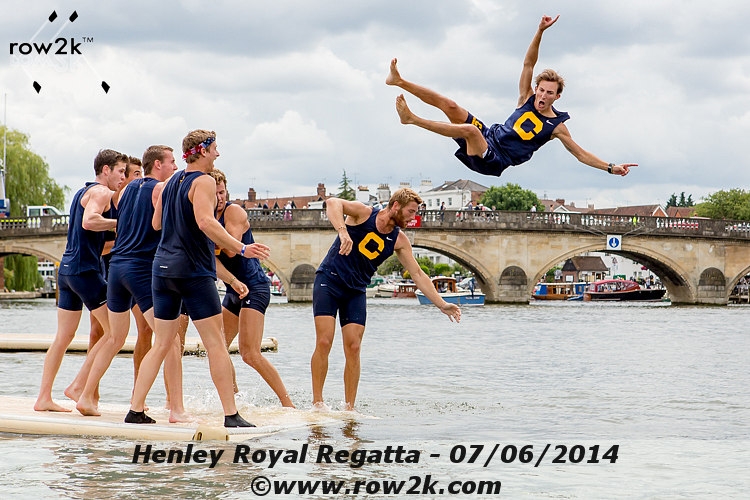 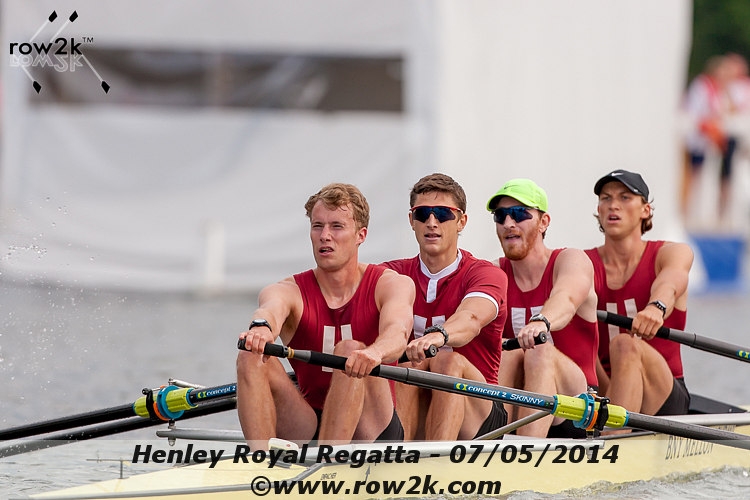 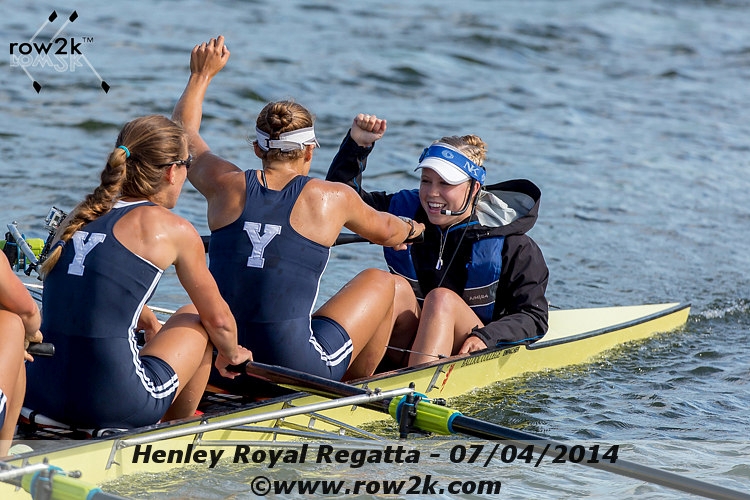 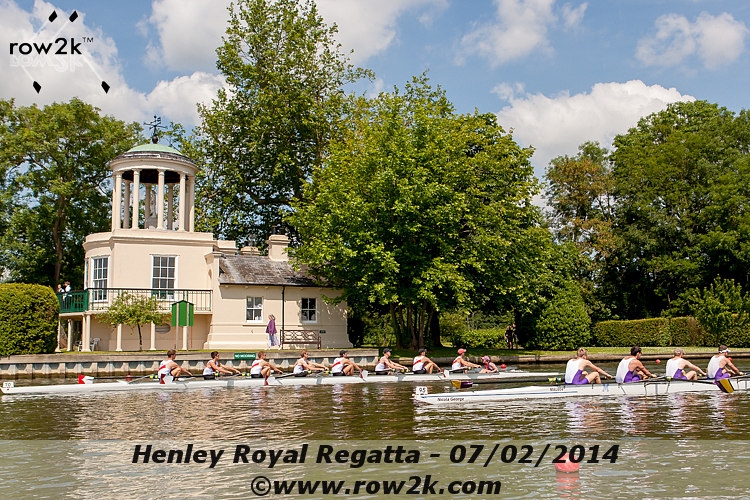