After a late start and pausing for a long break at lunch, Sunday is otherwise hardware or no hardware all day long. After a launching break for "an accident on the water," it turns out it was Ochal and Anderson, the US double, had collided with the small wooden power boat on the practice side of the river. Warren and Glenn were fine; the wooden boat? Not so good.

The first US athlete to hit the course was Gevvie Stone from Cambridge Boat Club, USA. The wind is ripping at the top of the course, it is tough conditions for small boats. Knapkova led Gevvie from the start, but by only a length in the first 1/2 mile. Stone kept with the Czech at nearly the same rate for the top of the course, then started slipping back a bit, unable to match Knapkova's progress. In the end, Knapkova won by over 2 lengths.

"It was tough conditions out there, and Knapkova has a really good start," (note that Mirka Knapkova of Czech Republic earned a gold at World Cup III in Lucerne 2009, and third at World Championships in Poznan 2009).

"I thought I had a pretty decent first 1000 and an pretty sloppy third 500... technically and mentally it was a sloppy 500. I will be working on being down and being stronger," says Stone. "Lucerne is so different with 6 lanes, and better conditions." Stone is treating Henley as another in her toolbox; "I am just learning from the experience and getting tougher, internationally is another step up.

"Last year in the finals I had a really tough race, and a really good race," (she raced Kiwi Haigh), says Stone. This year's row-over in the last round when Twigg withdrew for medical reasons: "Well, it was fun, but I would have rather raced Twigg."

Stone is packing up for Switzerland now, where a top four finish would cement her status as the US single sculler at Worlds in New Zealand in October. If she places lower than fourth, a trial will be held in September, where Stone would surely be a contender. No Head of the Charles for Stone this year? That would be news she'd love to hear.

In the Men's single sculls event, The Diamond Challenge Cup, Mahe Drysdale seems to have returned to nearly top form after the back injury that kept him out of World Cup I and II. After that kind of a break, there is always some speculation about how a top athlete will re-enter the mix. Drysdale cleared the table of any speculation with his demonstration today. He seems to be primed to hit the World Cup stage again next weekend in Lucerne from a lofty perch. In this singles match, it was replay of the women's race in a sense, with the leader holding onto to that position down the course, but with a very able sculler giving chase.

Princeton Training Center (US) faced Reading University and Leander in the Queen Mother Challenge race for quads to close the morning matches. The PTC crew looked very nice yesterday, and are heading to Lucerne as a unit. The PTC crew led after the start by a canvas, and the crews remained level for the first 3/4 mile of the race--this is the close matches you hope to see Sunday at Henley. At Remenham, however, the UK crew made a move that was not matched, and Reading University and Leander was taking a couple extra feet with each stroke. They lead by a length, then a length and a half, to finish 2 lengths up at the finish.

Break then back on the water for Washington to face A.S.R. Nereus from the Netherlands, stay tuned. 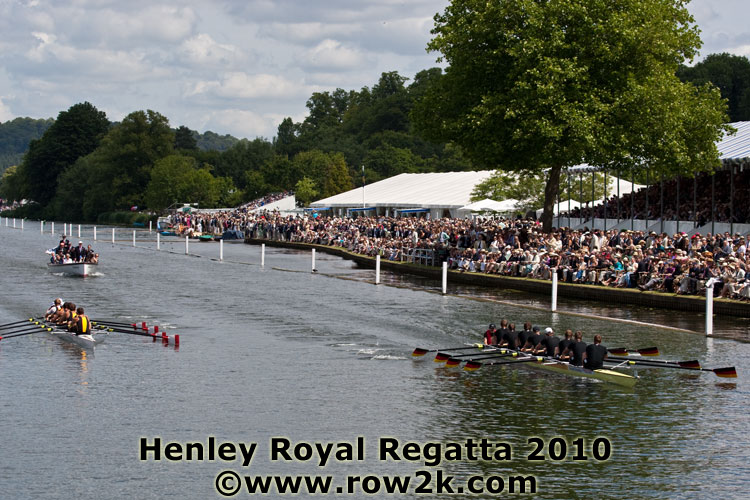 Saturday AM: Roomy Racks and Getting Knocked Out
Get our Newsletter!
SUBSCRIBE
Support row2k!
If you rely on row2k, please support row2k!
Advertiser Index
Advertise on row2k