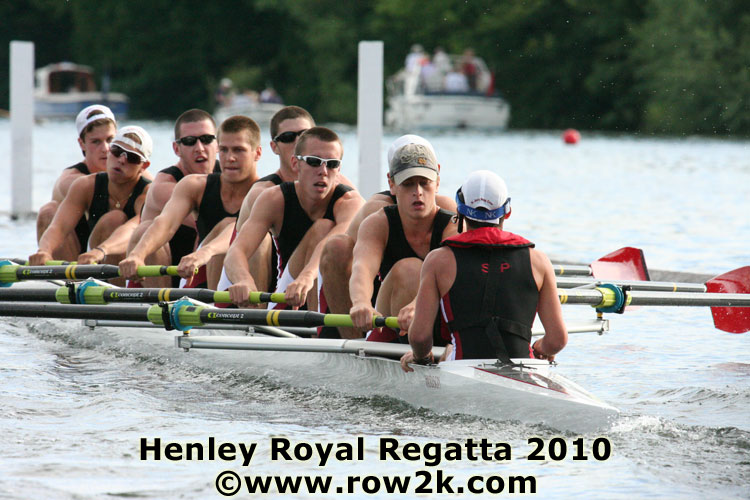 St. Joe's and Kent will meet up tomorrow

As the brackets narrow, the racing is getting tighter and more engaging. In the first race for US Crews, Harvard again made fast work of a UK crew, dispatching another foe in the Temple Challenge. Rowing slightly lower throughout than Durham University "A", their two and a quarter length victory may seem comfortable, but a quick glance at the athletes post-race belies that assumption. They fought for this one, and tomorrow they face Washington. This US rematch will test their mettle in head-to-head competition with a crew that won the IRAs in the freshman Eight, Harvard finishing fifth, six seconds back. The shakedown at Henley sometimes changes the terms, this gets highlighted in the program tomorrow as a bench-clearing brawl.

The Prince Elizabeth Challenge is designed (those crafty Stewards) to match a UK and a US crew here. Whereby the variation of a Canadian crew and others have sometimes entered the mix, the four remaining teams: St. Joseph's Prep and Kent on the US side, Eton and Shrewsbury on the UK side, are no strangers to Henley finals. This always sparks things up in the corral (er, enclosures) of well-dressed folks near the finish.

The match between St. Joseph's Prep and Melbourne Grammar School matched two complete unknowns. Although Melbourne Grammar School had won their Aussie Schoolboys and were second at the Head of the River (different than the UK version, or any US head race) which is a multi-lane race as US spring racing, they do not necessarily face as many crews as SJP who have a season with Stotesbury and Scholastic Nationals (it could be argued that all of Aussie schoolboy rowing could fit on the shores of the Schuykill) under their belts.

Nick Lloyd, head coach from Melbourne says that "It very strategic so you really need to focus on your own crew...you talk them about how to react and respond...." he explains that he spends a lot of time through the season just developing methods for success in each situation, and he has been successful in Aussie schoolboy rowing with assistant coach Dan Church. They have a quad here as well, and last year one of their quads was in the final for the Fawley Challenge. The 7-man of the eight here stroked the quad last year-he knows his stuff. Lloyd also mentioned they have a pretty fast start.

As Lloyd promised the race took off with power strokes through Temple Island putting Melbourne well in the lead. St Joseph's, with a full parent posse in the Umpire's launch, was behind but looking calm. At the barrier, the Aussie crew had a full one length on the Philadelphia scholastic powerhouse. At 3/4's of a mile, St. Joe's had reeled in the Aussies, and were just 1/4 length down. Passing the drunken hordes late in the afternoon on the banks in front of Remenham, St. Joseph's put on a signature Philly move and moved through Melbourne.

The Melbourne coaches exchanged glances in the launch, and Nick said to Dan something to the tune of (paraphrase) "if they do not do it now, they're not going to get it." Instead, SJP poured on a ten or more, and every parent on the St. Joe's side of the launch leaned out, tilting the boat precariously to the Bucks station! Father unit in stroke seat of the launch was pumping his fist in silent cheer, mother of coxswain was almost out of the boat to get a better view... scholastic rowing really brings the most emotions, yes?

In the end, SJP took the race by 3/4's of a length. They had worked hard for this, but perhaps not as hard as the Mom of coxswain Lou Lombardi who says of her experience in the UK....(say this to yourself with a Philly accent) "how long does is take to get a cup of kaawfee?" (coffee) Great city, great parents! (ed. note: the writer is a native, Philly born and raised)

Lining up on the course as St. Joseph's paddled to the boat tents was Princeton Training Center's entry in the Stewards' Challenge Cup straight four against Hollandia Roeiclub, Netherlands. This lightweight Dutch four is comprised of identical twin Muda brothers (the stroke brother having some problems containing his exertional effluvia /or excessive spitting), Heijbrock, and Lievens. Coach of the Dutch team feels they are having some great training now, and will face lightweights in Lucerne next week. With the World Championships so far in the distance (October in New Zealand), national teams are looking at a long season where are lot of things can change.

The US Team of Guiseppe Lanzone (who moved from stroke in the eight to bow in the four today), Brett Newlin, Henrik Rummel and Josh Inman earned a silver in the Munich/World Cup II in June. In the Stewards' Challenge Cup today PTC/US lead this race start to finish, even with all four of these guys rowing just a couple hours earlier in the Grand (and not an easy one, as noted earlier), this is a boat that has some familiarity with each other. Well rowed, they will face the Canadian heavy four tomorrow at 5:00 pm. The Canadians will be rested, as none have raced in the Grand or have had any wear and tear at Henley. Stroke and 2-man in this Canadian four are University of Washington alums (Crothers was stroke from 07-09, Calder earned a silver in the Olympic pair event) and no slouches. This one should be a barn burner.

More PE News! Kent and Salisbury could have taken a little drive in the trailer across the small state of Connecticut, but instead they crossed the Atlantic for the chance to earn the Prince Elizabeth Cup. Paired up late in the day at Henley, Salisbury was feeling like they had momentum after a win at Reading. If you go through the entire season, odds-makers in Vegas would go with Kent, even with the Reading loss.

Salisbury had the race at the beginning, but similar to SJP, Kent has a building progression through the course, they just keep getting stronger. One Kent moved through Salisbury, they separated and their Connecticut comrades just couldn't get it back, and Kent took it by 1 3/4 lengths. After the race, Salisbury was emotional and physically spent, they fought valiantly for this. Kent will face St Joseph's Prep tomorrow, both boats accelerating to the finish... it will all come down to who can put all the pieces together for 2100 meters.

To close racing Friday, Glenn Ochal and Warren Anderson dueled lightweights Fraga and Mendes of Portugal. This US double has had some success, winning the National Selection Regatta at home, and fourth in the Munich World Cup in June.

Ochal and Anderson were looking for some redemption after a frustrating race in this morning's Grand. Up against lightweights in the Doubles Challenge race, they don't discount the ability of a LW crew to beat them ("I'd keep my eye out for the Kiwi lightweights tomorrow," says Warren.), but they had a plan based on their own boat's strengths.

"We just felt that if they were near us early on, they were putting too much out," says Ochal.

Anderson, stroke, noticed the Portuguese team was rowing really high, and thought to himself (referring to his opposition), "you can't keep going like this forever." They didn't. The US contingent led from start to finish, with Ochal trying to convince Anderson to ratchet it back a bit near the end, they had this one. Eventually Anderson complied.

And a few comments on the morning race in the Grand, since they were talking:

"We just didn't have the cohesion to get it together and get those last couple of seats in the last meters of the race," Anderson says. "We were trying with everything we had."

"Four of us are scullers, and Will Miller learned to row starboard last week...." Glenn Ochal. (Noting that they have not rowed too much as an eight.) Glenn of course did stroke a boat in the Grand last year! (after sculling of course)

Mea Culpa: This AM row2k reporter did not recognize the wife of Harry Parker, Kathy Keeler. Is that the rowing equivalent of not knowing Brad Pitt's wife?