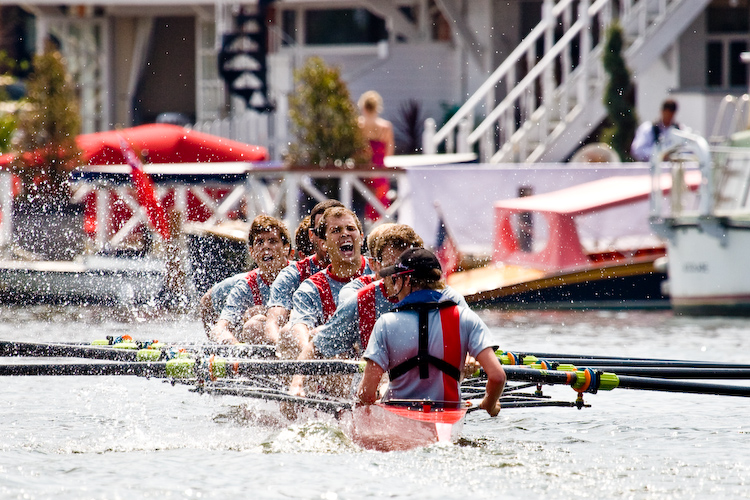 Day two at HRR saw the first rounds of the Diamond Sculls take place, with seven of the eight heats taking place before the lunch interval. GB sculler Alan Campbell and his coach Bill Barry have decided to make Henley their priority over the Lucerne World Cup, in order to allow him to pace his build up to the World Champs in Poznan.

The event is hotly contested this year, with Campbell facing opposition from New Zealand World Champion Mahe Drysdale, Olympic Champion Olaf Tufte and Belgian Tim Maeyens, who came fourth in Beijing. Campbell has won the Diamonds twice before in 2003 and 2007 when he beat Drysdale in the final, while Mahe won in 2006.

Duncan Grant, the New Zealand lightweight, out-rated his opponent Ian Lawson, the 2008 Diamonds winner in their heat. After a false start from Lawson, Grant took a small lead which he slowly increased over the course to 3 1/2 Lengths. Lawson, with a 60 lb weight advantage challenged repeatedly but failed to come back on the New Zealander.

Alan Campbell broke the record to the Barrier by 1 second in his race against local lightweight Will Hoodless this morning, "I thought I'd give Mahe something to aim at" Campbell commented after the race- and Drysdale nearly equalled it in his heat against Nick Baker of Eton Excelsior, losing out by .5 second. Tufte apparently was a bit upset because nobody told him what they were up to.

On the women's side of the singles events, Gevvie Stone advanced in the Princess Royal with a three-length win over C. Aitken. Stone won the women's Henley a couple weekends back, setting a course record in the process, and seems still to be on track this week.

The record to the barrier in the Diamonds was the one of only two to fall today as the wind picked up and swung from from tail to head. One person who was pleased about the change in conditions was Sir Matthew Pinsent, who'd been concerned that his Goblets records set with fellow Steward Sir Steve Redgrave in 1993 and 1995 might fall, this now seems unlikely to happen as the wind is not forecast to move back to a tail wind for the rest of the regatta - but you never know.

Dave Bell, bowman of the Leander Visitors crew, was being interviewed by Radio Berkshire yesterday when the interviewer got onto the topic of post race partying: "I assume you leave the partying to the end, as the rowing is obviously more important?" he asked "but what happens when you get knocked out early?" Dave's response: "I wouldn't know, I've never been knocked out" - a comment he may have regretted tempting fate with, when his crew lost to Molesey in their first round heat today... 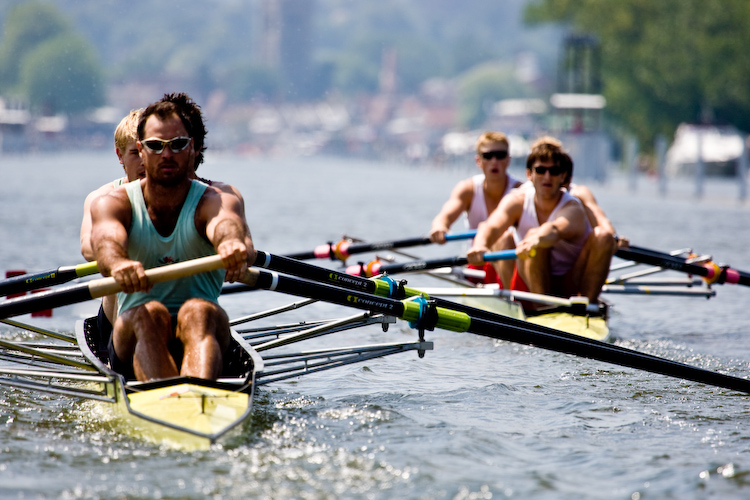 Also in the Visitors a composite between Newcastle University and Dukla Praha of the Czech Republic put out a crew from Oxford Brookes. You would be correct in thinking that Newcastle and Dukla are not the most obvious of bed partners, but Czech international Jakub Zof is hoping to get accepted to the university next year, and when he was over looking around earlier this year, he agreed to compete in a composite crew. His three crew mates are equally international : Filippo Cozzi (an Italian U23), Murray Wilkoc (a Scottish-Pole) and Mason Durant (an Anglo-American).

The closest race of the day was the Visitors heat between Isis (Oxford Uni) and Cambridge University. Cambridge led their old rivals the entire way down the course, only to lose by a foot in the last few strokes. Cambridge appealed afterwards but were turned down.

New York Athletic Club & Camp Randall won their Visitors heat against Uni of Queensland and Australia and Cambridge University in what appeared to be a battle of bad steering (see the photos) as both crews kept the referee busy flag waving over the whole course.

In the Thames Cup, Four score and four continued their progress to the final after rowing through Marlow, who took an early lead of a length. Despite being the heavier crew, Marlow were unable to maintain the lead and Four Score gradually reeled them back in, going on to win by 2/3 of a length.

Rivals Gonzaga College and Brunswick School, lined up for the third time this year for the second round of the P.E., however, despite Gonzaga winning their last two encounters, it was Brunswick who came out on top with a sharp clean performance. Gorganza challenged repeatedly but couldn't quite get back on terms.

Princeton progressed with little bother in the Temple today after a breathtakingly fast start left their opposition from Newcastle University wondering what happened. It's not that Newcastle were slow, just that the Tigers came out roaring.

Finally, a reinvigorated (without the aid of Viagra) MIT crew beat a Molesey crew in the Ladies plate which contained two of the Henley Stewards - brothers Greg and Jonny Searle.

US crews who progressed today were: 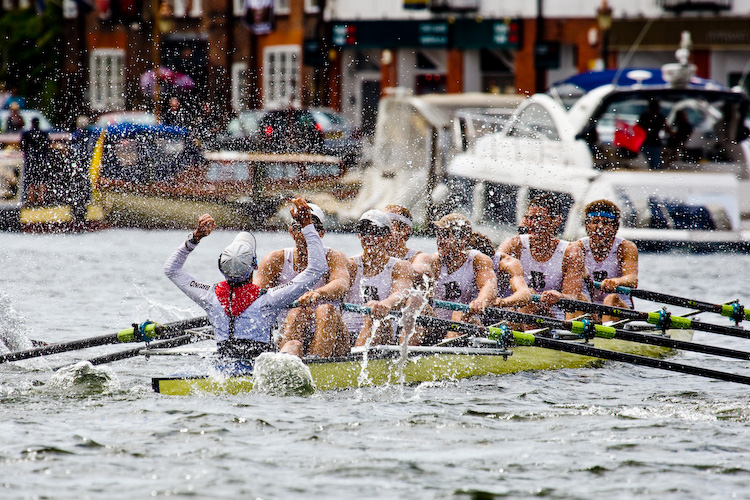 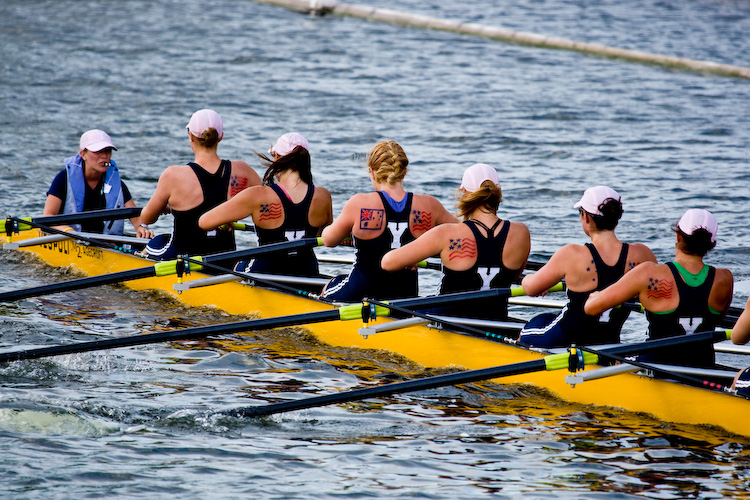 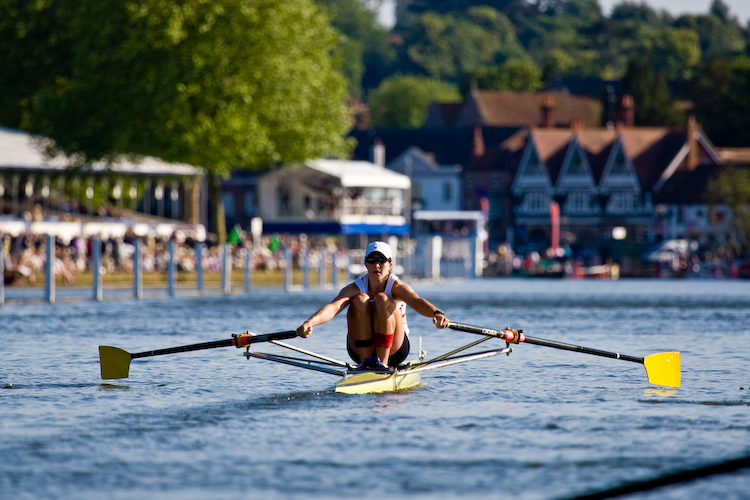 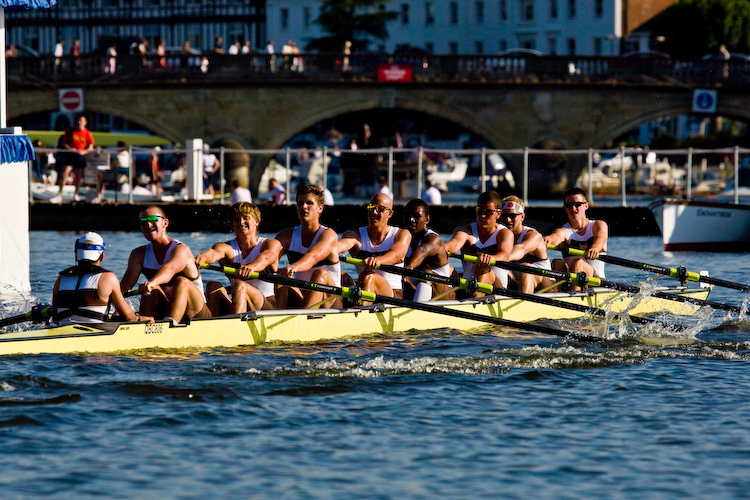